Utah exploration was truncated from five days to three, framed by winter weather. I left town on 35 mph icy roads and returned on snow-pack at the same speed.  While I regret coming home early, I don't lament the deceleration process this trip enforced.  Especially after reading, In Praise of Slowness: Challenging the Cult of Speed, by Carl Honore. My life is "velocitized".  I spent days researching and pondering a spring break location.  The challenge: stay close and do not camp in the snow.  I decided on two canyons that flow into the San Juan River under 5,000 feet on Grand Flat, and Moqui Canyon that drains into the Colorado River, their confluence under the waters of Lake Powell.

I stopped by Natural Bridges National Monument to see if I could get down into White Canyon and explore Deer, one of my "projects".  As you can see from this photo taken on Hwy 95 fairly close to the monument, it looked promising. Many of you will recognize the dome on Comb Ridge and snow covered Abajo Mountains.  Further up the Grand Gulch Plateau, snow accumulated fast.  It was two feet deep in the campground and no one had plowed the road or shoveled off the picnic tables.  Inside the visitor center I found three brand new, kindly but befuddled rangers who said the trails weren't open and even they hadn't visited the three bridges, ever.  The table turned as they drilled me for information about their park.  That was wild. 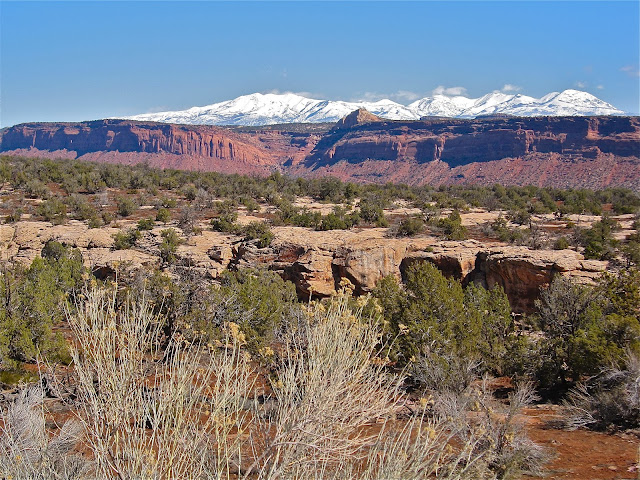 Given conditions, this trip was about getting into canyons I could access.  A major storm system that cleared out the previous night turned roads to clay.  I took my chances on Whirlwind Draw, a little known, shallow canyon overshadowed by heavily visited and spectacular Grand Gulch to its east.  In 1986, naturalist Ann Zwingler wrote beguilingly of the modest Whirlwind in her book, Wind in the Rock.  I've been enticed ever since.

I wish I could sit here for eons and watch as these sandstone wall crumble, grain by grain, and fall to the floor of this dry wash, become rearranged by water and wind, compressed to other cliffs, excavated into other canyons, and feel the wind all the same. The rock changes, the channel changes, the wind just carries air from one place to another, more constant than the rock. The rock is ephemeral, the wind eternal. Ann Zwingler

I headed down Hwy 276 towards Halls Crossing, then hung a left on the dirt road towards Clay Hills Crossing, the take-out for the San Juan River, and onto a tiny two track for half a mile until I wimped out and parked.  I punched it through some muddy puddles and slipped around in the clay. Admittedly, it was slimy mud walking but I reveled in the clear blue silence, the views of Navajo Mountain and Monitor Butte, and the challenge of route finding around a pour-off when the canyon got a little deeper. 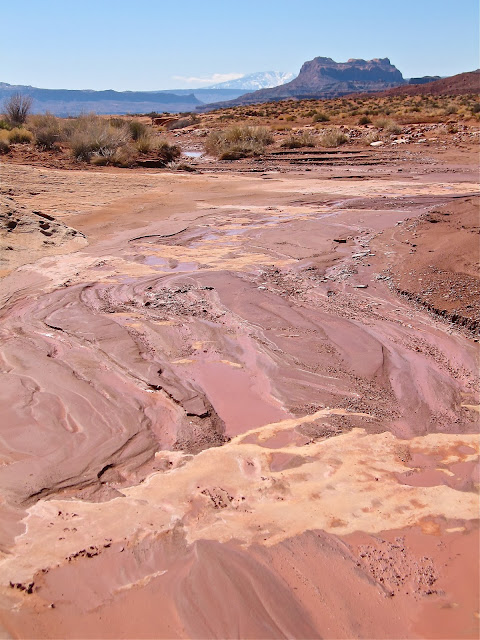 This is as deep as Whirlwind gets and I'm on top only because I couldn't quite make one climbing move by myself.  Eventually I got back down in, and walked until I was transformed and restored. Because of a late start I only walked seven miles total, coming within a mile or so of the San Juan River. Reportedly there are barrier falls that prohibit access to the river but I'll return to give it a try. I camped that night in utter simplicity, sleeping in my truck against the cold, parked on a little slab of sandstone. 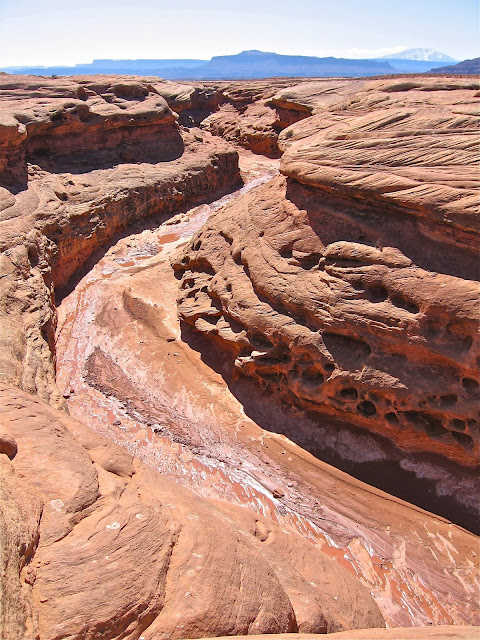 Seeking greater warmth, the second day I drove down Hwy 276 and then out Burnt Spring Road six rugged 4WD miles to an arm of Moqui Canyon. 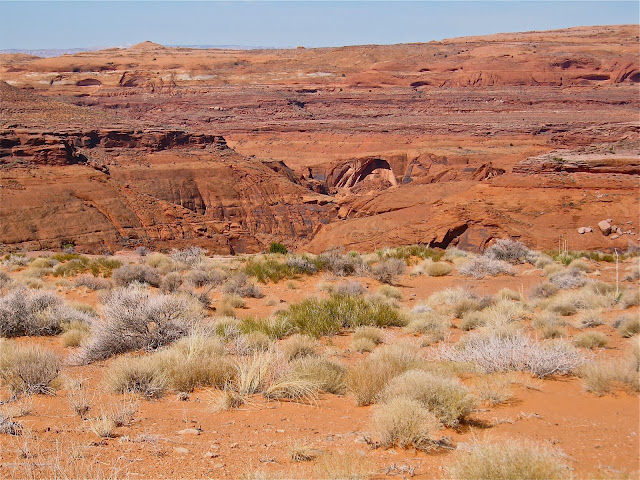 After slidding a mile down a humongous sand dune, I dropped onto the canyon floor.  While a grader had created switchbacks down the dune, people had clearly gotten stuck on several corners. Just downstream I explored a south facing alcove seen from the top and found six elaborate petroglyph panels. This image depicts a gorgeous example of Glen Canyon Style 5, art of hunters and gatherers. Note the 20 vertical lines in the big horn sheep. I spent the rest of the day walking up canyon, knowing I'll eventually access the lower portion down to the Colorado River, now inundated by Lake Powell. 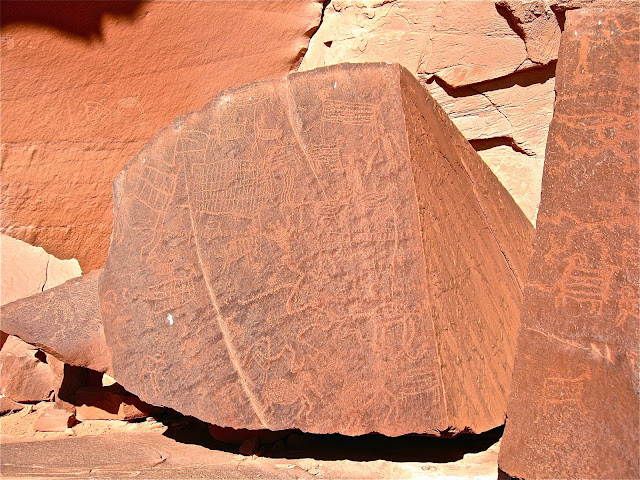 I spent a second night deeply asleep in profound silence and solitude. 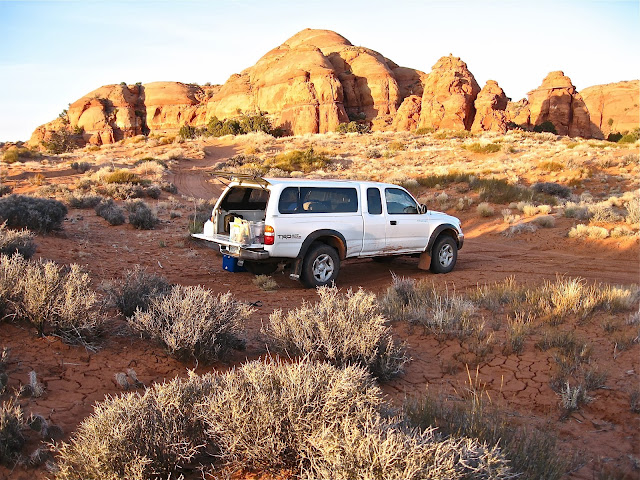 Early morning I drove a few miles south to Halls Crossing on Lake Powell and took this picture of Fifty Mile Ridge (west of Hole in the Rock Road) on the fly.  I could have stopped in the middle of the road because the only other vehicle was the Park Ranger's. He waved with such enthusiasm I felt like a first spring flower. Remarkably, no one was in the campground and the little store where I hoped to get ice was closed for the season. 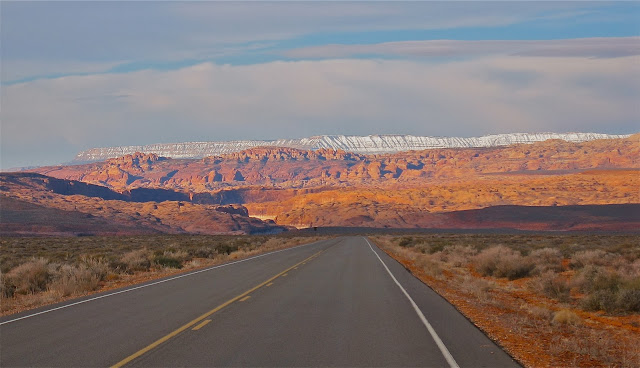 Delighting in the solitude of the obscure, I returned to Grand Flat and explored Steer Gulch. The shallow wash didn't disappoint; it was comprised of fluted swirling pink and white sandstone. 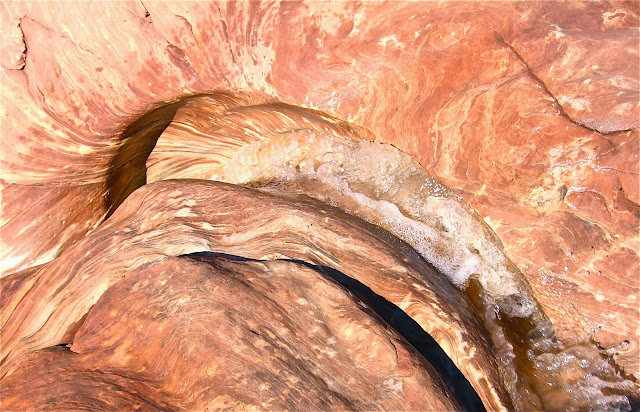 Again, I simply drove out a tiny two track that's not even on my map and choose a side canyon that looked like it would yield access into the main. The canyon had flashed a few days earlier rising four feet into a torrent. The rain turned little nothing rivulets into substantial somethings for their 15 minutes of flash. I quickly learned how to judge the suction quotient of the slimiest mud, lucky to have walked out with two boots. I was richly rewarded for the mud slog by this petroglyph panel of three feet in San Juan Basketmaker Style walking up a wall going somewhere important.  Note that the top and bottom have 6 toes! 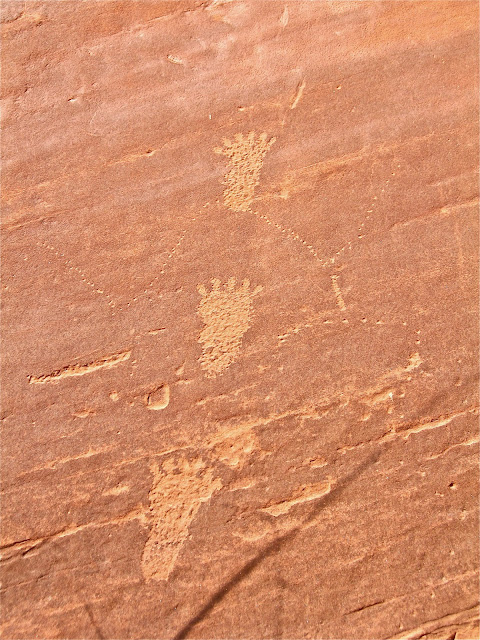 By the time I got out of the gulch storm clouds were billowing.  Needing to get down low, I drove to Sand Island Campground just west of Bluff at 4,000 feet.  It was deserted except for a group of college students from Chicago who were putting on the river.  I felt for them as my truck rocked me to sleep in a gale so stiff I was worried about toppling cottonwoods.  Dreams of hiking for two more days were dashed when I woke to this scene. Sure, I could have hiked in the cold but I only live two hours from Bluff so I headed home, planning to return in April. 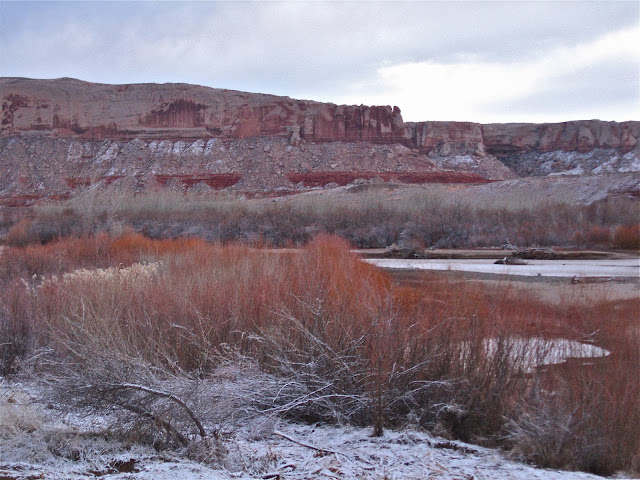 I took a back road along Mc Elmo Creek that spills into the San Juan River.  This compact river valley is home to an old Colorado ranching community.  I was lucky to get this photo by stopping in the middle of the road and leaning out the passenger window.  No one else was driving on the three inches of snow and slush. There's a swing set to the right of the home and an ancient tractor under the eve. 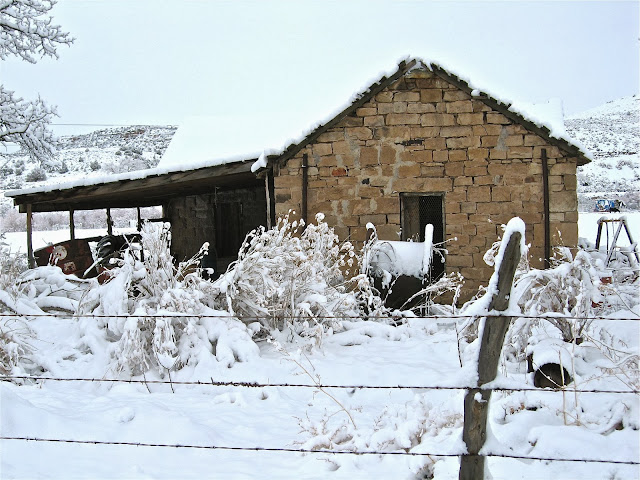 In Deseret News, 1861, a reporter described southeastern Utah as, "measurably valueless, excepting for nomadic purposes, hunting grounds for Indians, and to hold the world together."

Posted by Debra Van Winegarden at 11:17 AM No comments: