Here is elemental life, here is genuine freedom; but these exalted states are not to be won without strict conformity to the inexorable requirements of the land. Dr. T. Mitchell Prudden, early 1890's

As we hike so we live.  You could say that about most any endeavor, I suppose.  This little story chronicles a short trip over five days in separate canyons in Southeastern Utah. It is metaphorical throughout so make it your story if you like.

The drive to encounter the American Frontier lives in our cells. Is there yet a frontier? There's a quota system on the Grand Gulch Plateau, trails are trodden to talcum, every declivity and divide is delineated on the topo.  Even so, the explorer's heart may still be satisfied.

Solitude.  It's out there, enough to meet the need of the most ardent contemplative.  Solitude delivers by degree. Stay in camp with a good book. Share a trail. Or spend five days in absolute aloneness. No footprints. I did find one thin track on a bypass, disturbed cryptobiotic soil growing back now, like patina on a petroglyph panel.  Judging from four-legged tracks, coyotes, bears, cougars, bobcats, lizards, and rabbits noted my presence.  I startled a buck from his morning bed, irritated a red tail who swooped down from her tree skimming my head, listened to the distinctive flap of a raven's wing, and felt a black and yellow butterfly skim my cheek. To be so alone.  I found it startling, raw, virgin, deeply satisfying.  No one had been there for some time and no one was likely to happen along during my tenure.

Nine inch bear track.  In the morning our prints were equally fresh.  I snapped this in the afternoon with gratitude for these tracks signaled I was on the correct path to my truck. 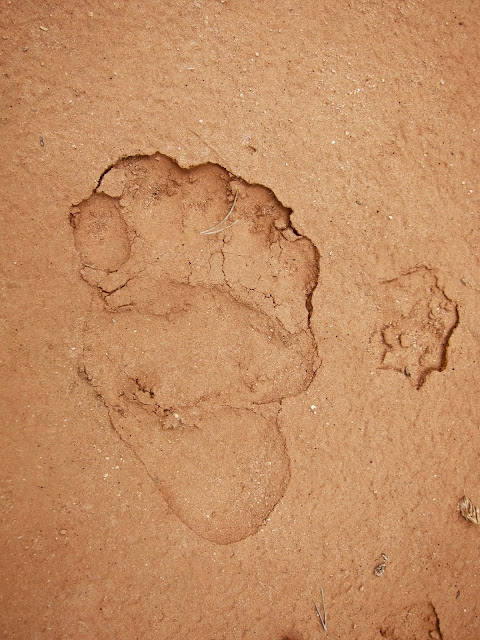 I realize now that I unwittingly rely on people who have passed before to help me find my way.  In the wild I take heart in a footstep, a pile of rocks, advice from a guidebook, trails noted on a map, distinctive landscape features.  On this trip I chose the obscure.  After exploring this area for decades that's what I'm left with in order to enjoy the new while satisfying old curiosities.  Route finding was most difficult.  Self-reliance was paramount for only I could lead myself there and back. My footsteps are too ephemeral to be trusted.  Storms arise, wind erases.  So I steadfastly placed my own cairns, stacking a few little stones, a stick, some sort of marker device, at every branch in every swale, rivulet, dry wash, canyon.  Once I was certain where I was on my topo, I penciled in my route.  I trusted my knowledge of canyon architecture and wilderness experience to augment little waypoints. The return trip is so sweet.  Stepping on your own footprints, vestiges of self.  There's no comfort like it. "Oh there I am!"

One of my Cedar Mesa/Grand Gulch Plateau 7.5 quads.  A topo serves as guide, documents where I've been, and some of what I've seen. 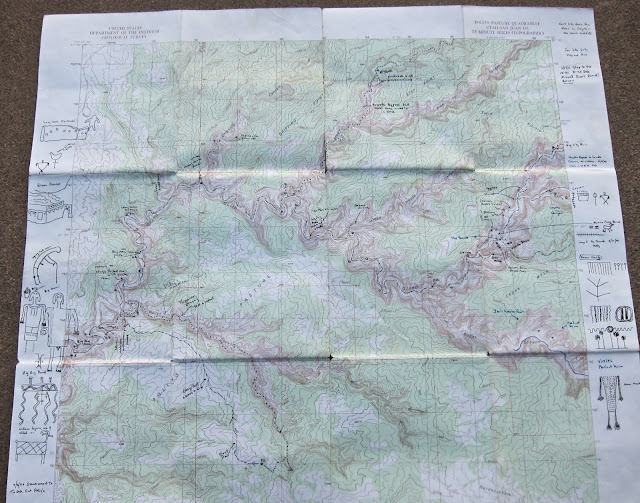 There are risks. I can't say there is a direct correlation between risk and treasure. That's probably a good thing. (I do believe there's a link between the number of visitors and site degeneration.) Quotas exist for popular canyons, those with the highest density of archaeological gems.  To find a ruin by intuition and searching rather than a GPS coordinate from a guide book or a number on a Trails Illustrated map, well, that feels like true discovery. 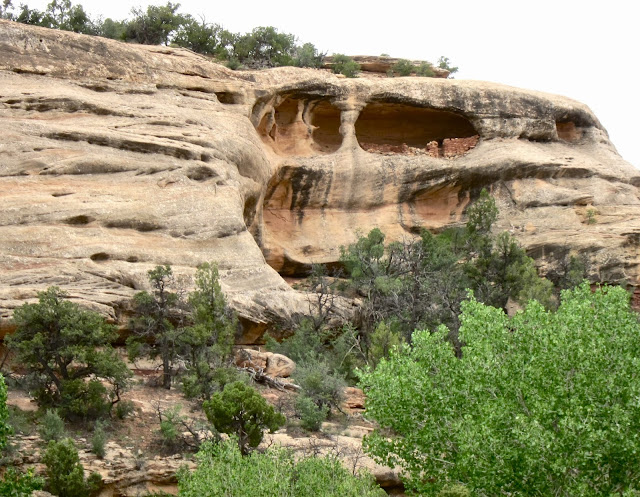 The first move is walking out my door after canvasing friends and realizing I'm going solo or I'm not going.  That's an easy concern to dismiss.  The scariest risk to vanquish is starting out, taking the first few steps on a walk riddled with unknowns. Twice, I parked on roads with no tire tracks, roads that were not on my trusty map. I left the truck without knowing where I was exactly.  I walked into a pinon-juniper forest with no landmarks, searching for any indentation in the land that would indicate a water course.  I hiked for miles following the dry path of gathering waters.  Rivulet of soil to narrow drainage of sand and stone to wide wash to deep canyon to, finally, a side canyon or feature that pegged me on the map.

Once I was in the canyon proper the real fun began for most of the traveling was on broad stone floors free of vegetation, the desert wanderer's dreamscape.

Stormlight upon the shallow, upper end of a canyon rarely visited. 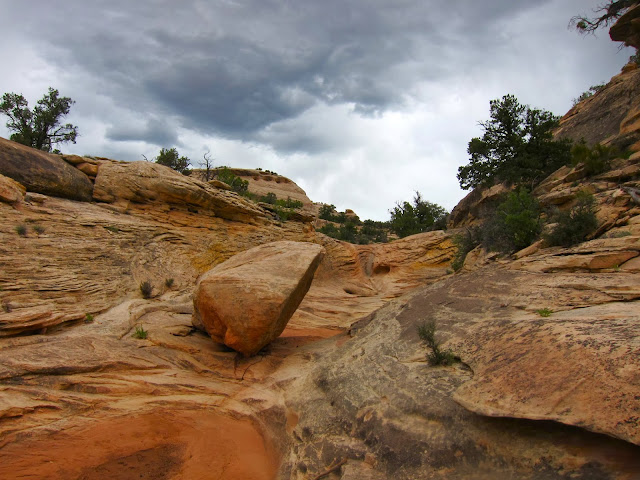 There are obstacles.  Sandstone is prone to creating dramatic pouroffs, or barrier falls, that must be bypassed.  I took each attempt as far as I could and was often able to find my way around a dropoff.  But sometimes I was thwarted and had to return via another drainage, come up from below on a subsequent day, or give up altogether. Somehow it feels okay to be stopped by the landscape.  To turn back for lack of will or bravery?  Unacceptable.

Impassible pouroff near the head of a canyon on the Grand Gulch Plateau. 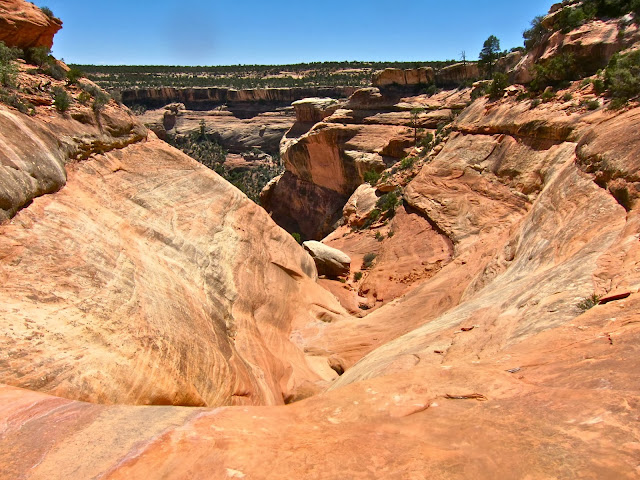 I'm learning to largely ignore guide books. Even simple things like distances can be way off.  Do these authors even hike?  This canyon reportedly ended, "in a sloped 40' pouroff and plunge pool almost immediately." When I checked it out I found the entrance slab to be a simple friction climb up an 80 foot watercourse. 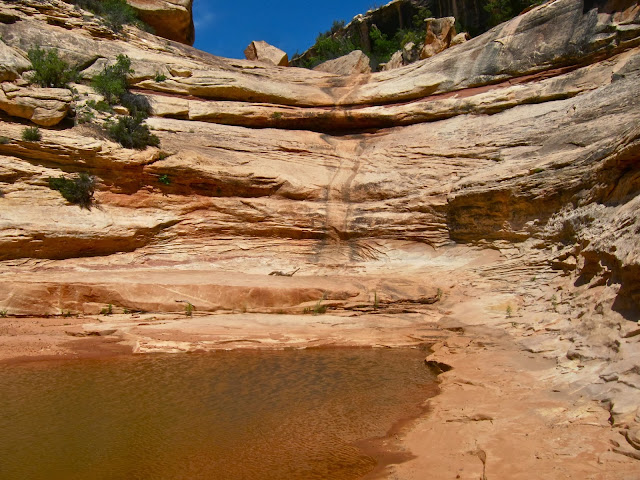 Beyond several tricky obstacles, in the upper reaches of this canyon I found a great treasure, an impeccably crafted dwelling with a T-shaped doorway.  Its most unusual feature is the diamond design made of small stones pressed into the mud to the right of the door.  Finger indentations have endured for over 1,000 years.

There is no map to a hidden treasure, a search must take place, and this pursuit demands experience, dedication, and courage. 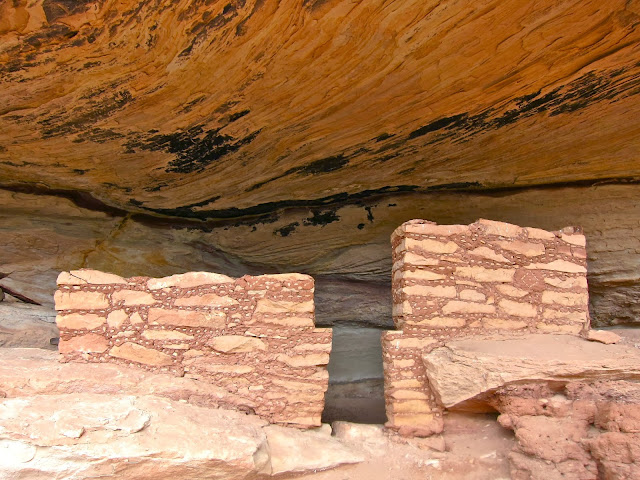 OK, so I took a few chances. I admit to periodic recklessness when I really want to get somewhere. The only reasonable way around this dryfall was down an eight foot wall.  It was easy enough to slither down backwards. And up? I wouldn't have dropped were it not for a three inch slope mid-way, my escape plan. Upon my return, I stacked up some rocks, then placed my backpack on the ledge above with the straps dangling in case I had to spend the night. Made it! Happiness. For it was a 15 mile day, 90 degrees, and my gallon of water was almost gone. 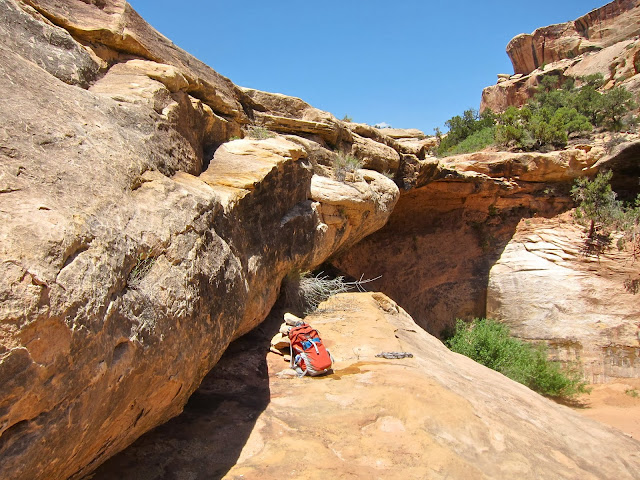 It was rather warm and flying teeth no-see-ums had their way with me.  The flowers were not plentiful but some prickly pear hybridized into astonishing colors. 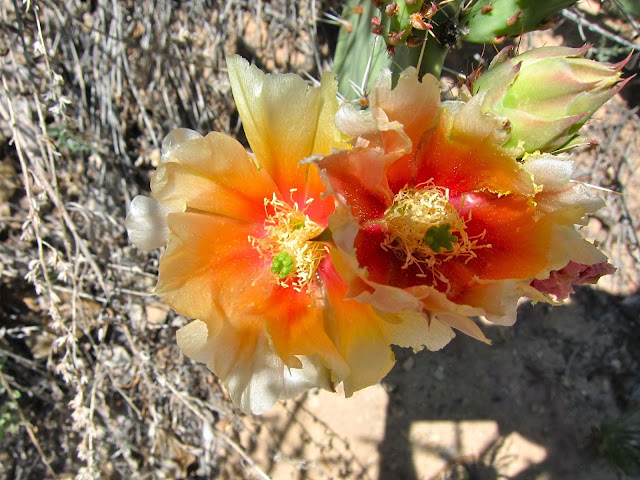 A honey bee feeds from a pink penstemon at the base of a pinon. 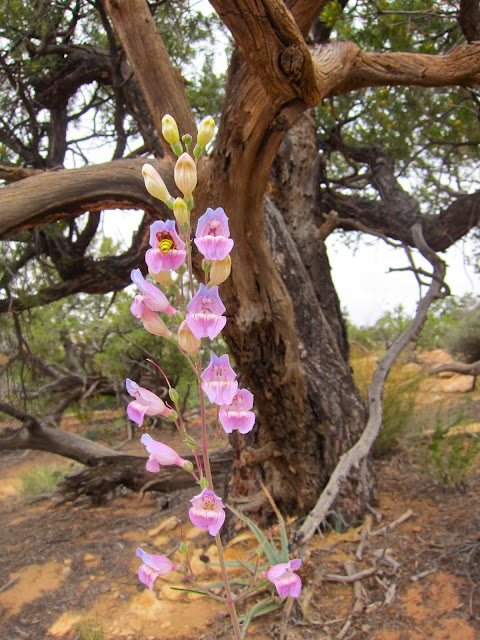 May your explorations, inside and outside, be as rewarding. 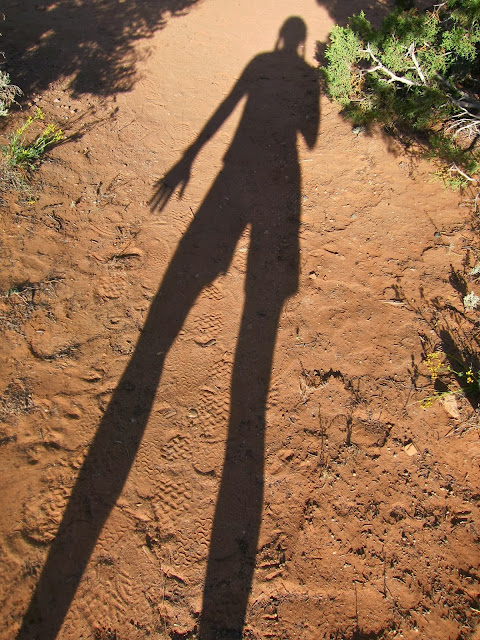 Stewardship note: I always erase sign of my passage, all way markers and cairns especially. It is both irritating and confusing to find old cairns going every which way. We all want and need to find our own path when confronted with obstacles. Further, the absence of human placed features contributes to our sense of frontier.

This is what wilderness is to me: being alone and knowing no one is within miles, and that although others may have passed here there is minimal, or no, trace of their passage. That the materialistic agenda of everyday life does not pertain here. That here I set my own priorities based upon the immediate necessitites of survival. That my time is totally mine to use, to expend and extend as I see fit. That I am totally responsible for my own well-being. Wind in the Rock: The Canyonlands of Southeastern Utah, Ann Zwinger, 1978.

Posted by Debra Van Winegarden at 8:55 PM No comments: