It is a fat half day drive to Capitol Reef from Durango via Fry Canyon, the graceful bridge over the Colorado River at Hite, and dilapidated Hanksville. Fern's Place where I commonly stayed in the early 90's is in tatters with a cluttered assortment of dinosaur sculptures sloppily assembled with rusted parts scavenged from farm implements. Arriving mid-day, we had our pick of sites in the quiet and intimate Capitol Reef campground. For $10 a night each site has a table, fire ring, a modern bathroom, and water that gushes with astonishing force from a central pump.

The afternoon of our arrival, my companion and I drove out the Scenic Drive and did a 6.5 mile hike to the Golden Throne Overlook before launching cross country to an appealing rock outcrop where we stumbled by great fortune on the birthplace of spherical stone eggs.

Golden Throne and the edge of Henry Mountains from 'Spheroid Egg Nest'. 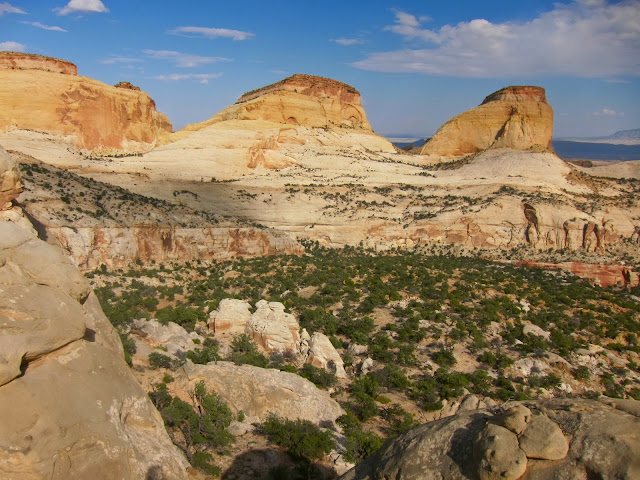 Stone eggs were being produced from mother rocks, a thrilling oddity. 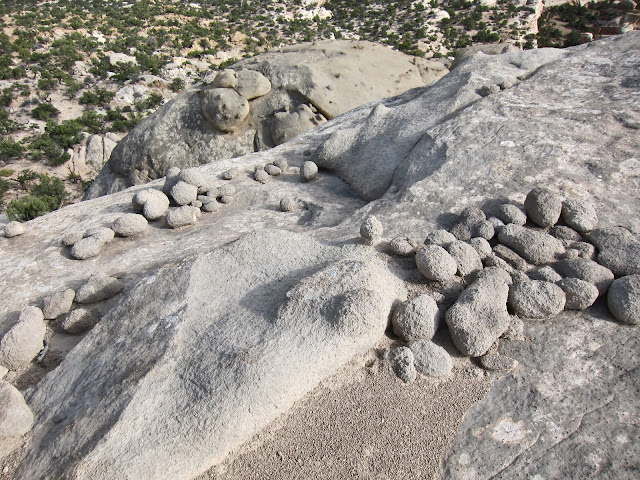 Each night we'd return to camp and by the time dinner was prepared it was dark. I recently procured a camp lantern that is a marked improvement over my headlamp. After writing the day's field notes, we'd solidify the next day's intention. While I had an itinerary in place before leaving Durango, it was subject to modification and there were trailheads to find and maps to sort through (THW, photo). 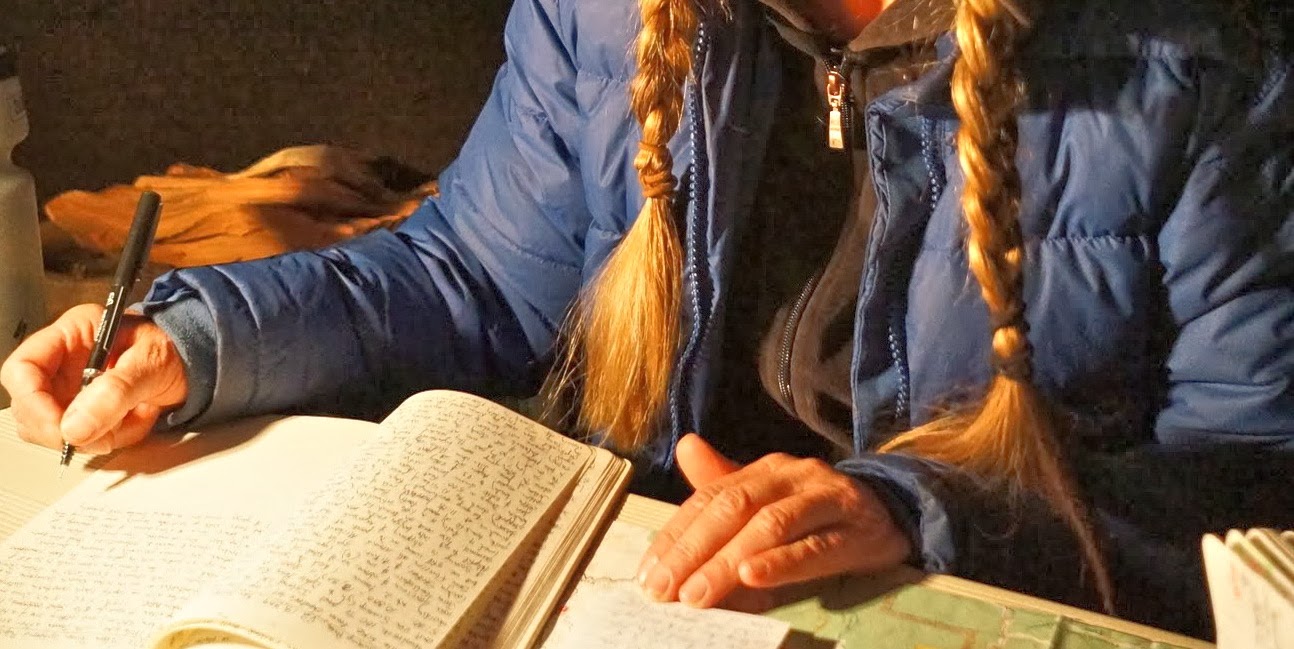 Day Two. We did a 11.6 mile loop which demanded a three mile trudge down the main highway from the mouth of Cohab Canyon to the Grand Wash trailhead. I hadn't hitchhiked since high school and was disappointed every time a motorcycle, RV, or an over-stuffed pickup refused us a ride. We walked through the stately, cavernous narrows of Grand Wash pocketed with pebble bearing solution chambers. On the Frying Pan Trail, we climbed to the spur leading to Cassidy Arch, a perfect catenary, contiguous with sheets of sandstone, allowing us passage. Lost in splendor ourselves, we met the vigorous Vittoria, a man in his mid 70's who had unknowingly overshot the campground turnoff by a rugged 1.5 miles. After telling him the disheartening news (his wife was waiting for him even then), we accompanied him back to the proper turn while he regaled us with stories of childhood in the pre-WWII Italian countryside. In retrospect, we were glad we had not gotten a lift but were there to turn him around in that necessary moment. 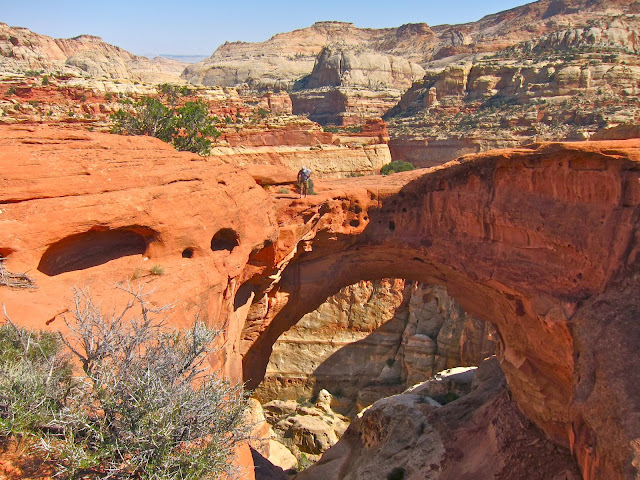 Day Three. After packing up, we drove down the Notom-Bullfrog Road, turned west on the Burr Trail, rose up through hidden switchbacks, and parked at the Strike Valley Overlook TH. Yes, we did the classic 9.5 mile hike on top of Waterpocket Fold (for which Capitol Reef is named), returning down Upper Muley Twist Canyon. This day we were searching for emptiness, the space between living rock--arches. The Fold is creamy white heartrock, Navajo Formation. To the east is a great valley of linearities; to the west, the older Wingate Formation, the color of flat, thick brick paint with a hint of salmon. Softer stone, arch creator. By eschewing the cairns and staying right on the rim's rib, at times three feet wide, we ferreted out ten arches.

Meaning is in the emptiness at Saddle Arch (THW, photo). 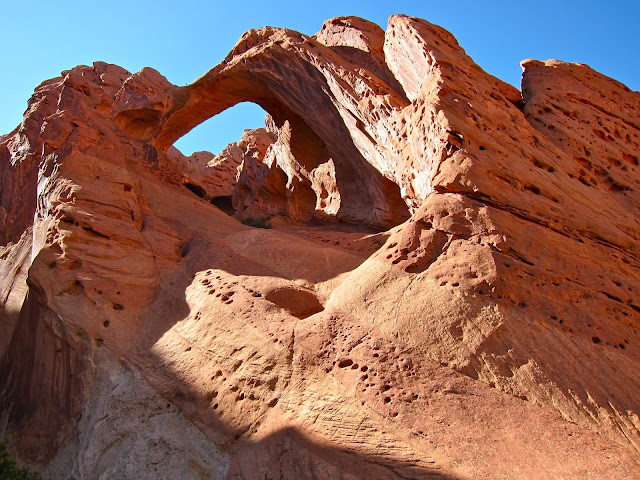 Day four. For decades I've wanted to drive over the Burr Trail to Boulder, UT, but was intimidated by the road's reputation. Imagine my shock to find it a paved strip! There are weeks of exploring awaiting off the Burr. We choose Egg Canyon because of its remote reserve of petrified wood. We searched for stone trees. We found three massive logs suspended over a narrow drainage. Walking over them, the texture underfoot felt like bark. But no! Solid rock, the color of ocher, and jasper, quartz, burnt sand, and midnight mud in which ancient trees are trapped. Route finding for 9.5 miles was difficult and would become increasingly so now that we were out of the national park, leaving all hint of trails behind. Solitude was complete.

Contemplating the frozen intelligence of a stone tree in the Chinle Formation (THW, photo). 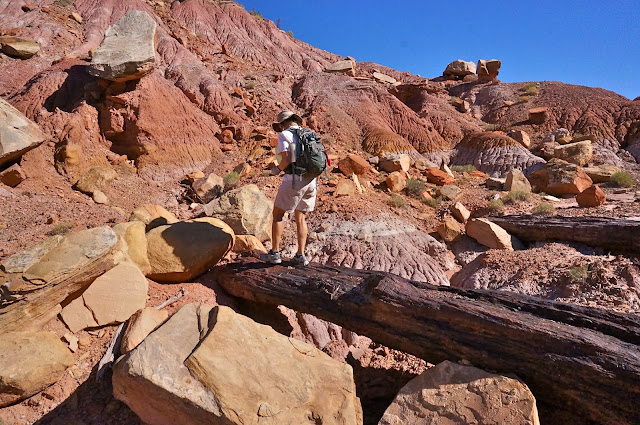 Stone logs have splintered neatly into rounds, ready for splitting. 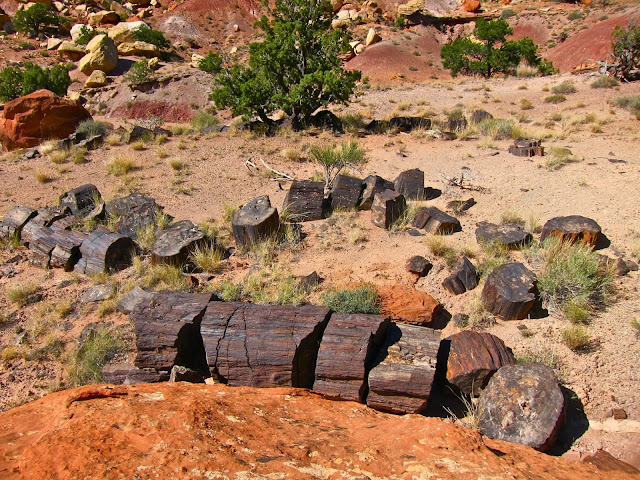 Day five. Imagine twelve miles of sucking in your breath, getting as skinny as you may, and squeezing your way through four slot canyons: Peek-A-Boo, Spooky, Brimstone, and the Dry Fork Narrows of Coyote Gulch. Many of you have been to these canyons, as have I. But how can one drive down Hole In The Rock Road and pass by these bastions of gaiety? Popular, we negotiated our way around people, backing up to a wider passage.

Natural bridges at the entrance of Peek-A-Boo. 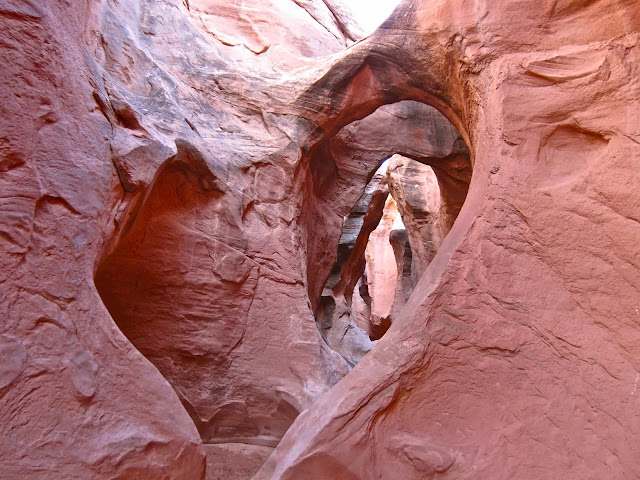 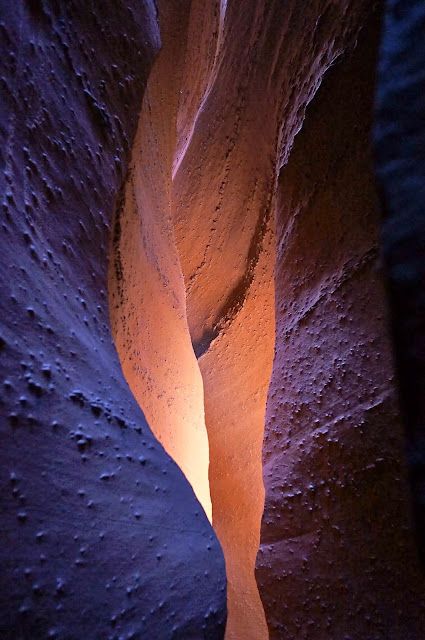 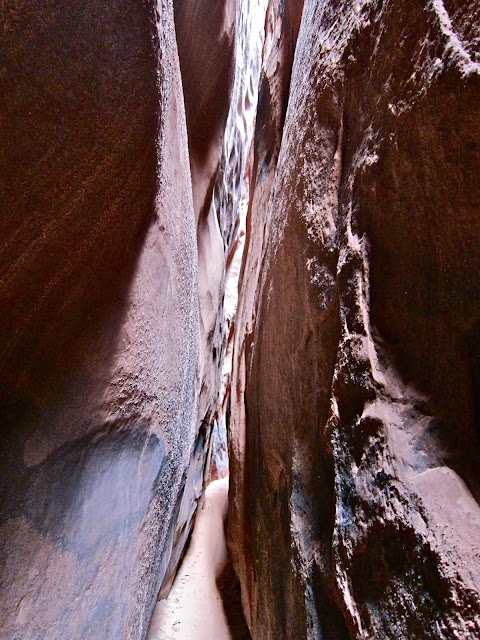 Day six. Excerpt from my hiking partner's notes: This was our most spectacular and challenging hike with an incomparably varied range of experience. Our 11 mile loop began in Sooner Wash which shortly presented a 30 foot pouroff. The suggested bypass was too difficult and frightening so we went downstream on the rim for several hundred yards to where the canyon wall was somewhat broken. Some dicey traverses and a final short slide down a slanted wall gave entrance at last. After joining Fortymile Gulch the way is blocked by a 20 foot waterfall. Going around to the right, at the bottom, further progress required wading. The next 2.5 miles featured both great difficulties and great delights. Wading through the creek was often through thick mud, sometimes knee deep. Very narrow passages were chest deep in water. All along the way were seep springs in the canyon wall with beautiful hanging plants. Debra was forced to carry her pack over her head on two occasions. The lower section of Fortymile was dark, wet, beautiful, and even spooky, worth the trouble. The high-walled narrow junction with Willow Gulch left a deep impression. In Willow Gulch, the terrain began similarly but with no mud. The route was over sculpted sandstone and sand bottomed pools. After a mile, the huge muscular Broken Bow Arch appeared. This arch is a very thick but perfectly proportioned flying buttress type, standing at least 150 feet high on a stone platform occupying a bend in the creek. Further upstream, flows decreased quickly and vanished. The trek continued through a long series of shallow but charming narrows. After crossing a blackbrush plain, we were back on Hole In The Rock Road, less than a half mile from our camp at Sooner Rocks. 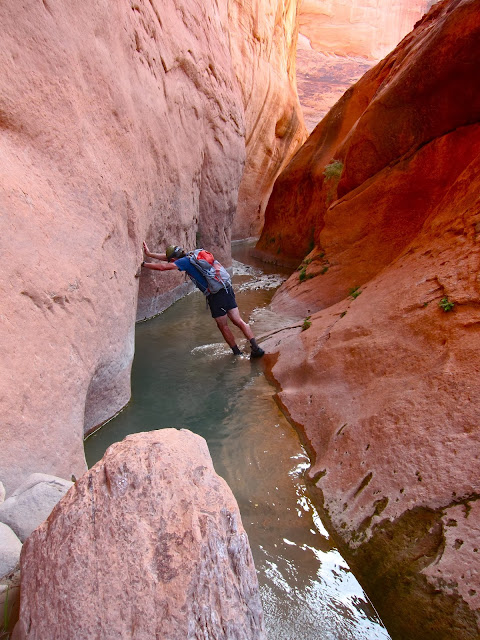 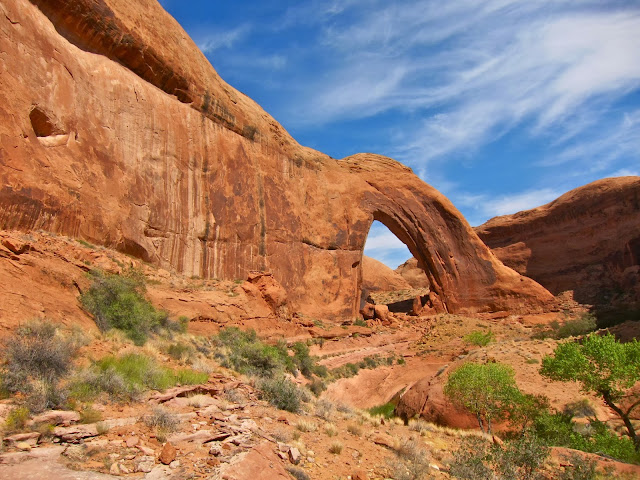 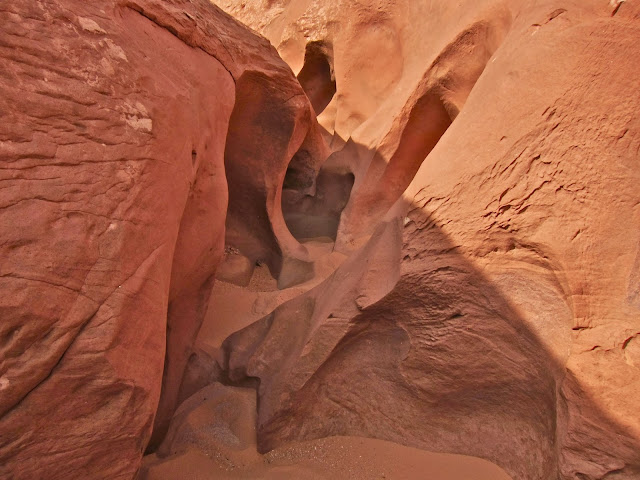 Day seven. Our intention was not to hike 15 miles but to go down Fiftymile Creek until we came upon Lake Powell where we hoped for an idyllic swim. The lake has receded considerably since my 7.5 topo was last photo inspected so onward we walked only to find still lake water lapping at a muddy flat. In our corkscrew egress canyon filled with delightful climbing challenges, we leaped over a 15 inch youthful rattlesnake who was doing his best to warn us with his flicking red tongue and high pitched black rattle.

Below Fiftymile Junction beneath 'Sky Bridge Arch' we happened upon a petroglyph panel at least 50 feet long and 20 feet high. The 'Bighorn Procession Panel' was hard to photograph in gleaming sun but tiny sheep were inside the bodies of ewes and life sized horned anthropomorphs had bellies full of snakes. Below is a small portion of the panel (THW, photo).

Recently inundated, we passed through narrows with an overlapping ceiling creating an interplay of bounce light and sun shafts. 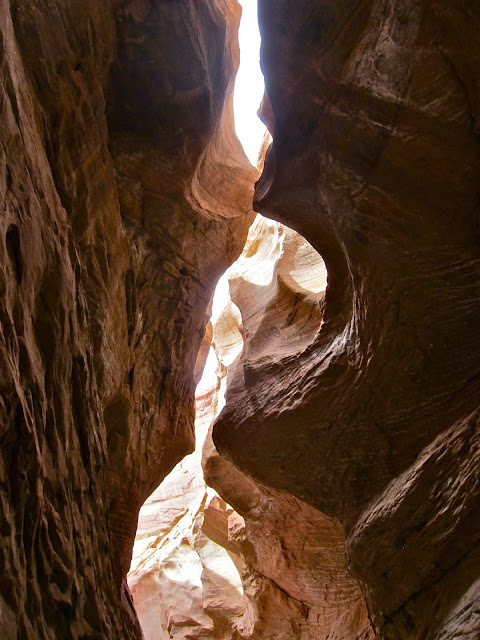 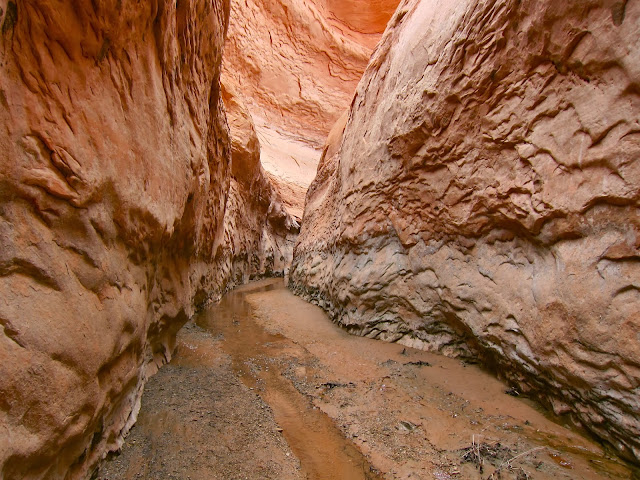 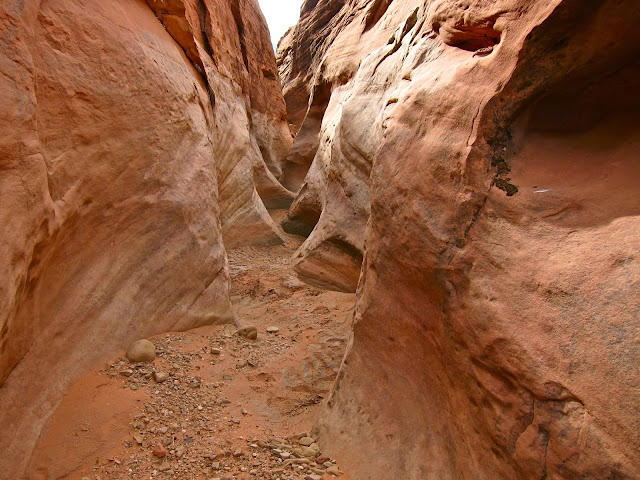 Day eight. With a span of 225 feet, Stevens Arch is among the ten largest in the world (six are in Utah). Not only is the window a Herculean structure on a whole other scale, so is the enormity of the Escalante River Canyon. Having been there twice before, I have finally perfected this oft baffling 8.5 mile round trip route to the arch that includes a barefoot traipse down Coyote Gulch and fording of the Escalante.

Shuffling sideways in Crack-In-the-Wall. On our return, we opted to climb the rib instead. Exciting! 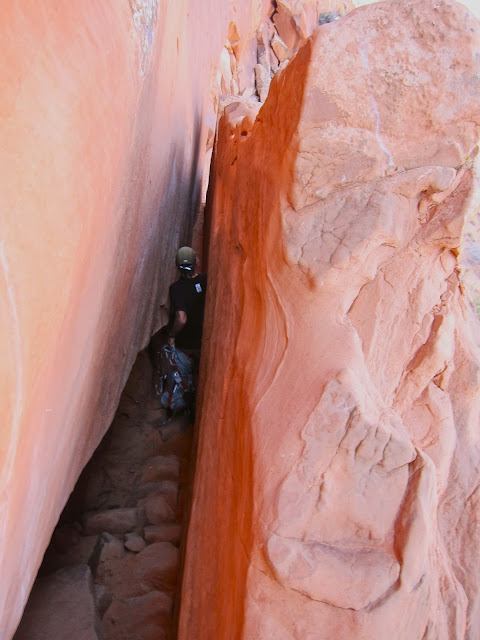 Stevens Arch with the ledge route to its base. 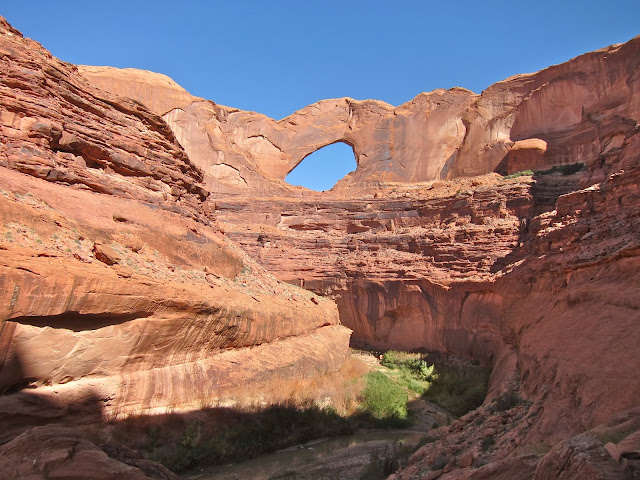 Wrapped in a ribbon of rock (THW, photo). 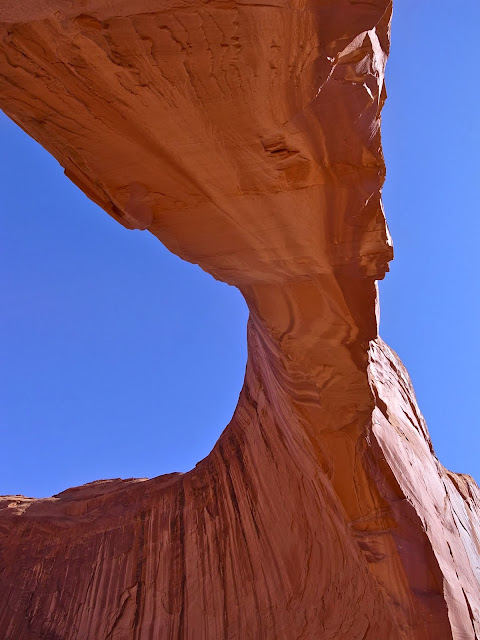 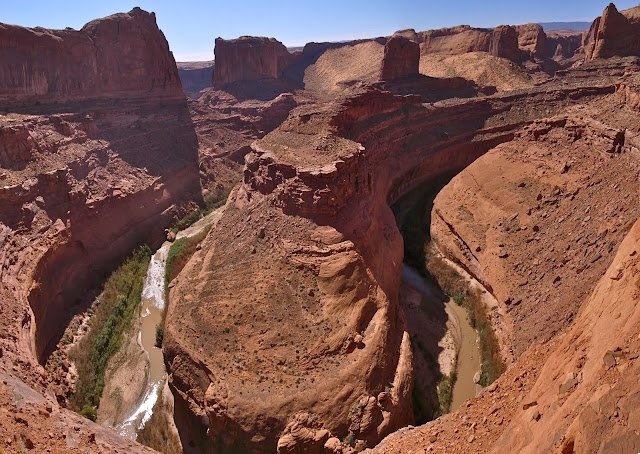 My truck, gear, body, and now my house is the color of red earth. I hesitate to wash up.

If you go: Escalante Outfitters rents tiny log cottages with a communal bath for $50/night. It is 365 miles and 7.5 hours from Durango, Colorado to Escalante, Utah.