Essence: The Hidden Valley to Moab Rim Traverse requires a shuttle. Or, cover the stretch with two out-and-back hikes. Visit petroglyph panels in the Canyonlands Basketmaker-style. Once you are on the Moab Rim, Behind The Rocks Wilderness Study Area presents boundless off-trail exploration possibilities. Adjacent to Moab, this hike is a locals' favorite so expect to share the trail.
Travel to Hidden Valley Trailhead: From Center Street and Main Street in Moab, drive south on US 191 for 3.7 miles. Turn right on Angel Rock Road, just before 191 narrows to one lane. In 0.3 mile go right on Rim Rock Lane following the sign to Hidden Valley Trailhead. It is 0.3 mile to a large dirt parking lot. No facilities.
Travel to Moab Rim Trailhead: From Center and Main Streets, drive south on US 191 for 0.6 mile. Turn right on Kane Creek. The paved road parallels the east side of the Colorado River. The trailhead is on the left in another 2.6 miles. Pit toilet, no water.
Distance and Elevation Gain: Hidden Valley Trailhead to the petroglyph panel and back: 5 miles; 900 feet of climbing. Moab Rim Trailhead to Point 5,305' Overlook and back: about 9.2 miles; 2,000 feet elevation gain. Hidden Valley to Moab Rim Traverse: 10 miles including side trips to petroglyphs and Pt. 5,305' Overlook
Time: 3:30 to 7:00 depending on route
Difficulty: Trail, off-trail; navigation moderate; no exposure
Maps: Moab, Utah 7.5 Quad; or Latitude 40° Moab West Trails
Reference: Legacy on Stone: Rock Art of the Colorado Plateau and Four Corners Region, Sally J. Cole.
Latest Date Hiked: January 2, 2016
Quote: I like to think of petroglyphs simply--as the expression of people's thoughts. Ellen Meloy, Eating Stone.

Looking down on the Hidden Valley Trail and Moab, Utah from Behind The Rocks. 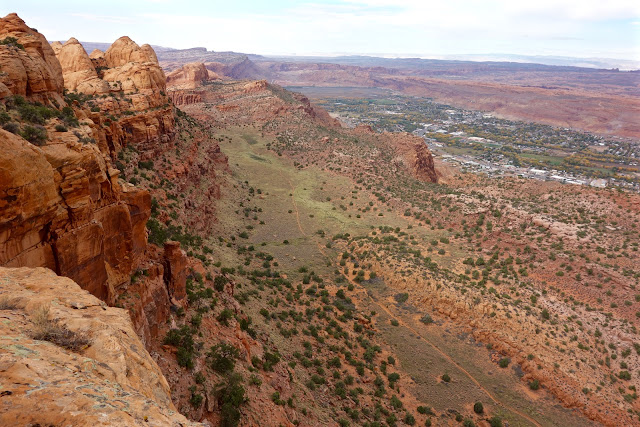 Locating Rock Art: This entry gives instructions to several rock art panels. Normally, I would never reveal the location of any rock art. However, the location of these petroglyphs is well covered in the literature so any attempts to protect this information is no longer meaningful. Please visit with respect.
Route: Two hikes are presented. Hidden Valley (black-line route) begins on the south side of Moab, scales the rim and then bears northwest to the petroglyphs. Moab Rim (blue-line route) starts beside the Colorado River, goes northeast to the rim, and then turns southeasterly. Walk the Hidden Valley to Moab Rim traverse with a shuttle. Click on the map for detail. 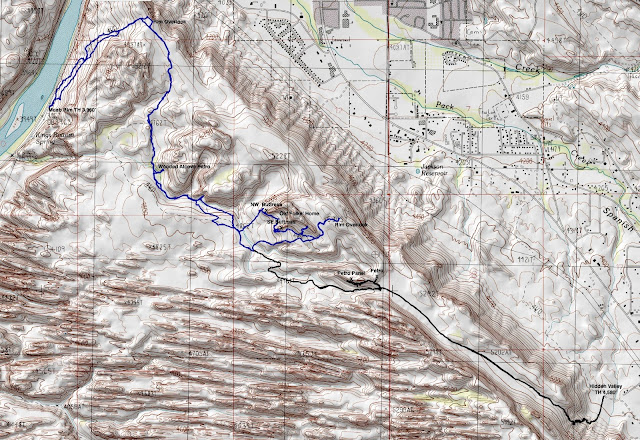 Hidden Valley: From the trailhead at 4,580 feet, climb consistently for 0.7 mile up the east flank of the Moab Rim. The trail's surface is impregnated with grounded sandstone boulders. The grade eases as the commonly traveled track enters Hidden Valley. Thread between cliffs and a rock outcrop, image-right. 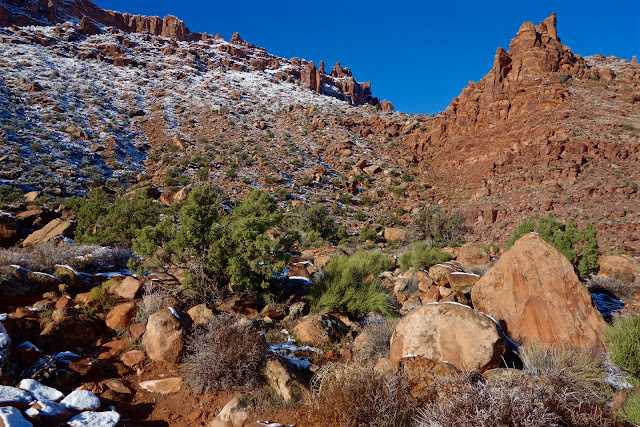 For future reference, a wild cat trail breaks left at 0.9 mile and scales another 400 feet into Behind The Rocks. Twin standing boulders mark this cairned route with a couple of easy Class 3 scrambles.

Now in Hidden Valley proper, the landscape lifts softly over a low rise at 5,280 feet. Reach a prominent divide at 2.1 miles, 5,240 feet. Finlandia beckons from Behind The Rocks. Poison Spider Mesa is north beyond the Colorado River. The primary petroglyph panel is along the base of the cliffs, image-right. 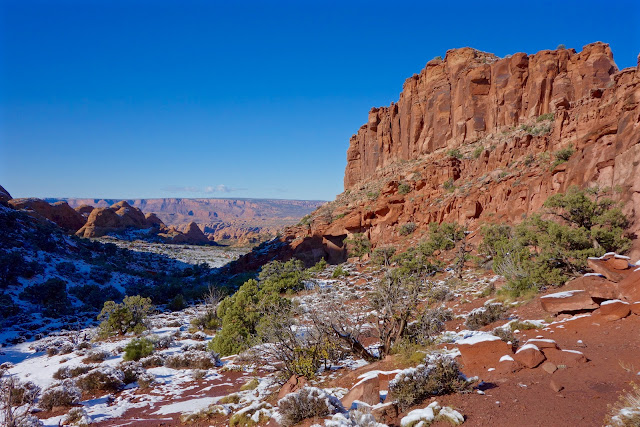 Upon the divide, find a well-established social trail that branches right/north and follow it to the southwest-facing cliff. Pecked into the desert varnish are examples of Ancestral Pueblo rock art, primarily in Canyonlands Basketmaker II style (ca. 1,000 BCE to 550 CE). Broad-shouldered anthropomorphs are densely pecked with hornlike headdresses and arclike arms. For thousands of years people who came before us left their stories on this long rock wall--stories of bighorn, bear and deer, hunting scenes and human passage. Images date from the Hunter-Gatherer period (from ca. 3,000 BCE in this area) to Pueblo II. The Canyonlands Ancestral Pueblo occupations continued until about 1,150 CE. The central figure below is about four feet tall. Please, do not intentionally or inadvertently touch the rock art. 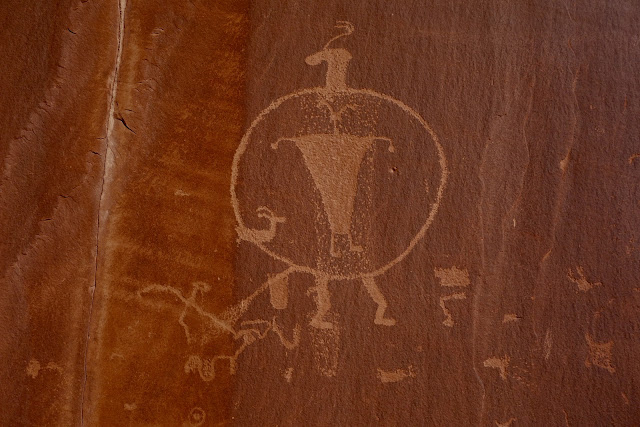 There are other rock art panels in this area, some well-documented on the web. For those returning to the Hidden Valley Trailhead, your turn-around is the divide. If you are doing the traverse, the Hidden Valley Trail continues northwest for another 1.2 miles to intersect the Moab Rim Trail at the Rim Overlook Road. Avoid the track going northeast 0.9 mile from the divide unless you want to explore the distinctive ridge of sandstone pedestals capped with limestone. There is a ruin in this area. The image below was taken on the divide looking east to the La Sal Mountains on a snowy day in November. 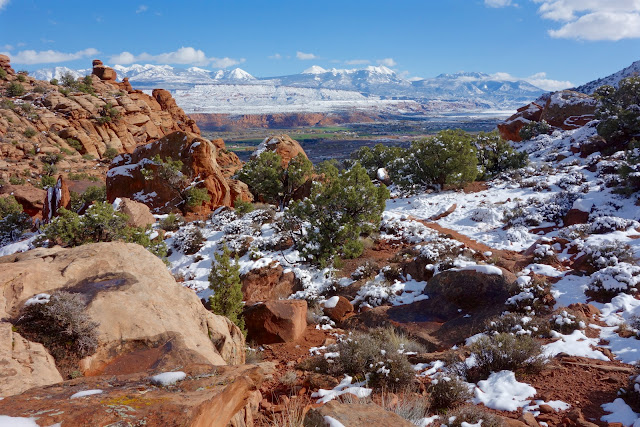 Moab Rim Trailhead to the Old Folks' Home and Point 5,305' Overlook:
The Stair Master Trail and expert-only 4WD track leaves from the north end of the parking lot. The multi-use options parallel each other (and the Colorado River) up a slickrock ramp. East of the road, the trail is at times steep and a little difficult to follow. No worries; just go northeast up the broad ledge. When absent of vehicles, I prefer the road for the sheer enjoyment of walking on slabs of Kayenta Formation sandstone. This shady approach can be frigid in winter. In January, 2016, it was so cold our rubber boot soles slid off the rock. 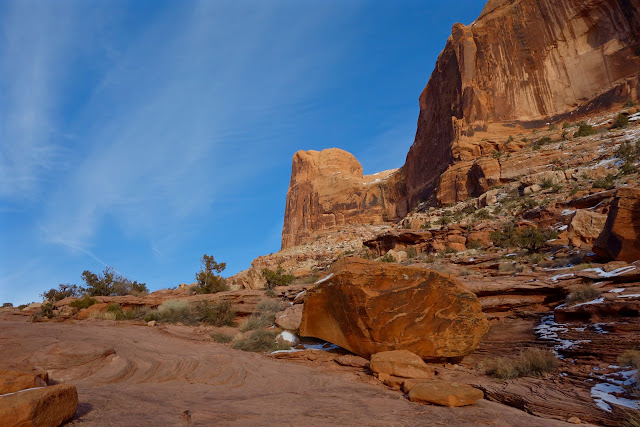 Leave the road on a spur and stand on the edge of the Moab Rim at one mile, 4,880 feet. Gather in the ruddy and rumpled stone surface of the earth. Look right through a window in Arches National Park. 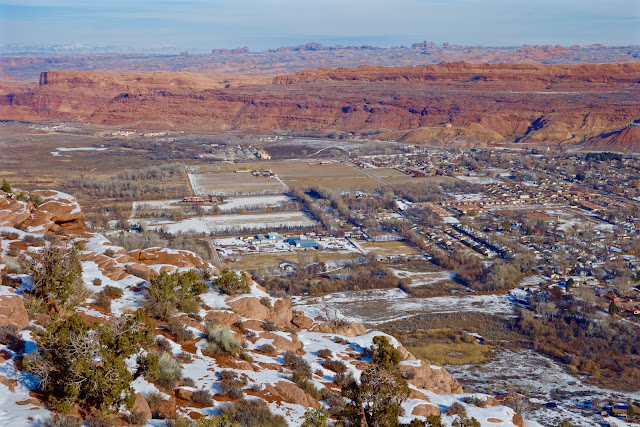 Back on the road, pass an information placard for Behind The Rocks Wilderness Study Area. The Moab Rim is the eastern boundary of the 12,635 acre WSA. Predominant are sandstone slabs, fins, domes, and knobs, alternating with sandy washes. Fifty percent of the WSA is bare rock. The track swings around to the backside of the cliffs that rim the river. 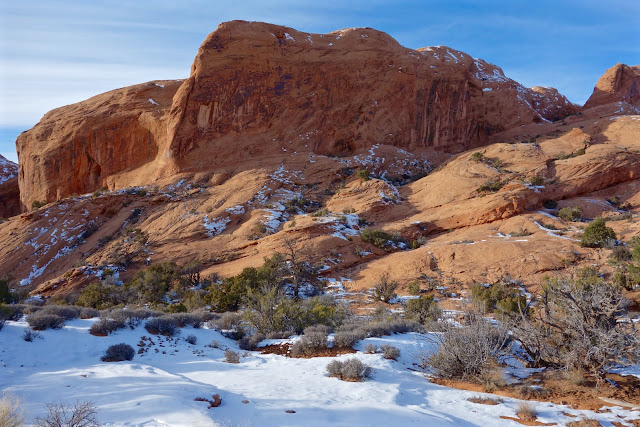 Lose a little elevation in a draw. An arch may be seen to the east in a massive Entrada Sandstone structure at 2.0 miles, image-center. 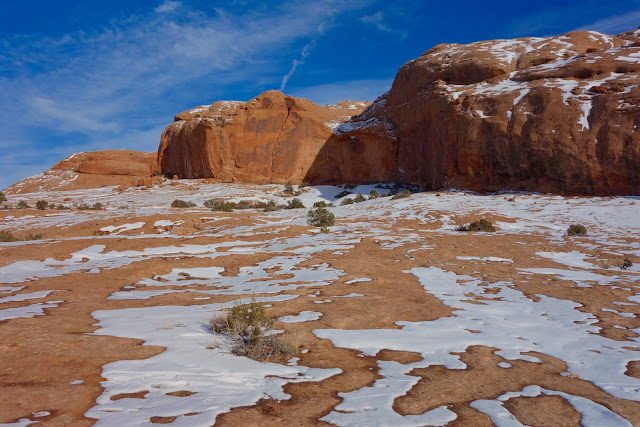 In an alcove in this area is a Basketmaker petroglyph panel. The large bighorn is exceedingly handsome. Beside him is an anthropomorph bearing a spiral shield. These images may date back 3,000 years. The feeling is intimate and timeless. 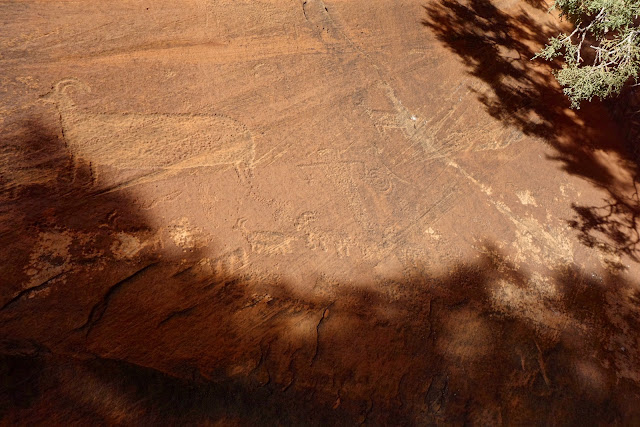 Pass a major opening that leads into the heart of the sandstone massive. A line of alcoves beckon from the east wall. 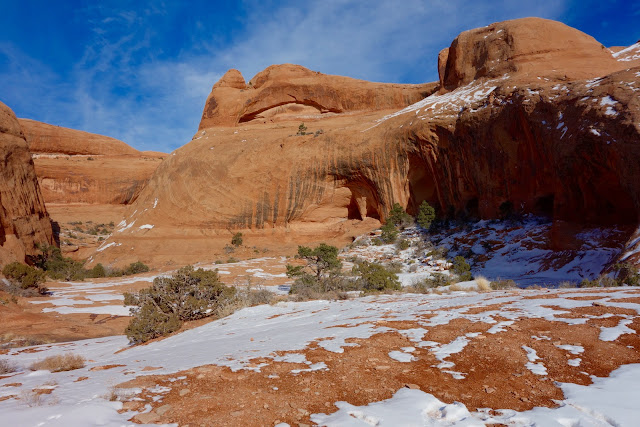 At 2.7 miles, the road turns right and goes up a short hill. We stayed in the drainage next to the wall. Climb into a south-facing alcove with multiple shallow caves. 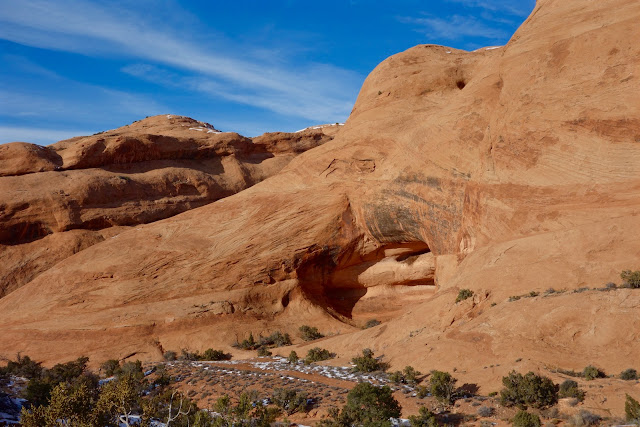 The drainage issues from a small canyon so we angled up a rock ramp and got back on the road. From here, another Entrada Sandstone dome is revealed. Some locals call it The Molar, others, the Old Folks' Home. In 2007, Rory Tyler wrote an article in Moab Happenings explaining the origin of the unofficial name and the location of rock art panels along its base. 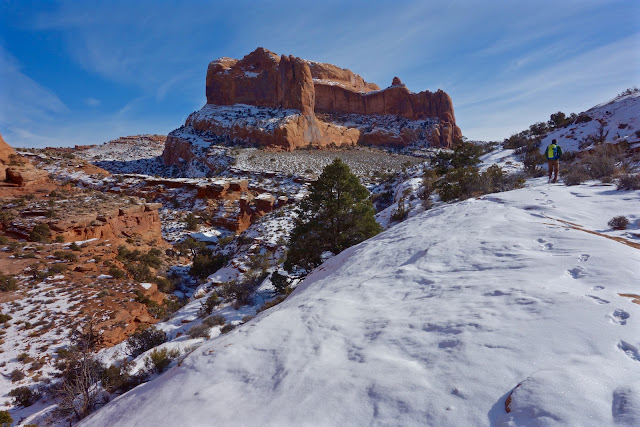 To visit the petroglyph panels, leave the road and cross a blackbrush plain. Walk northeast to the broken blocks at the north end of the dome. Snow protected the soil from our footfalls. If the soil is cryptobiotic, please use the Rim Overlook Road as access. One rock art panel is pecked into desert varnish at the base of the Northwest Buttress. 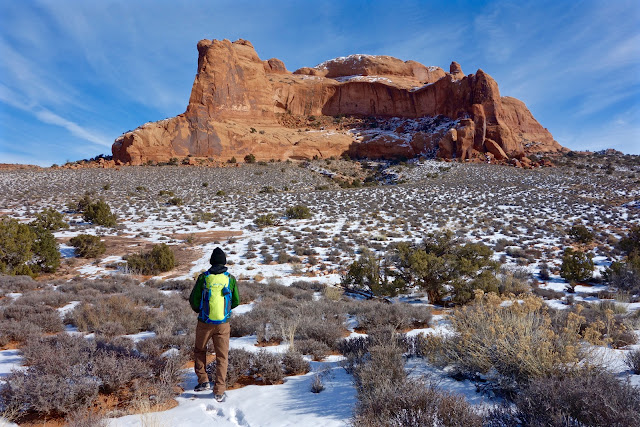 This image was taken shooting up from below but it is possible to attain the ledge to visually examine the Basketmaker rock art closely. There are anthropomorphs with feathered headdresses, connected spirals, bighorn, a snake with a divided tail (or, horned head?), lizard, dragonfly, bear print, canines, and geometrics. 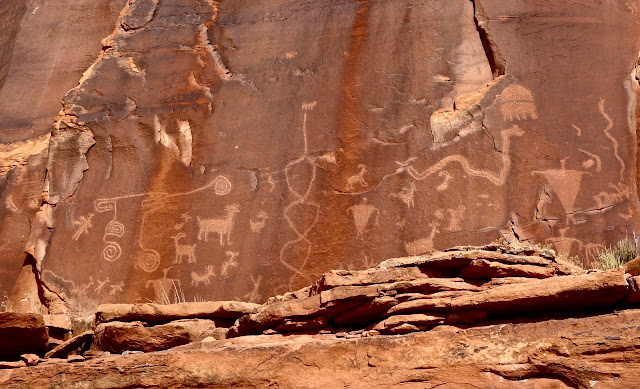 Standing near the main panel is a solitary buck. 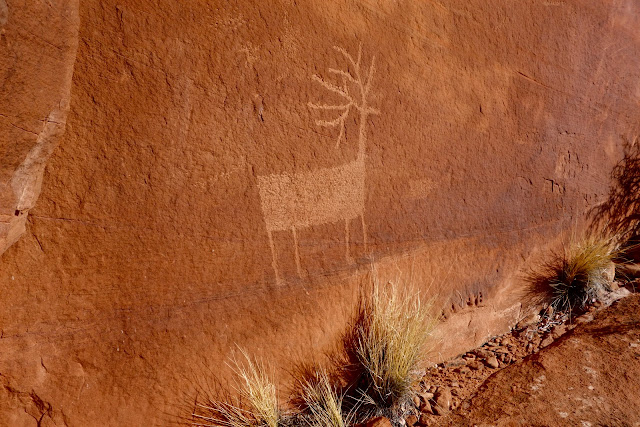 Contour east along the base of the barrier wall that protects the massive amphitheater residing between the buttresses. Cross the head of two drainages on a thin sheet of limestone to reach the base of the Southeast Buttress. Two spires stand in front of the dome. At the base of the outer tower find a panel with faint images. There is a row of anthropomorphs with horned headdresses, a snake, a long geometric line, and deer. Look up at the middle tower to see another panel behind the light-colored boulder. 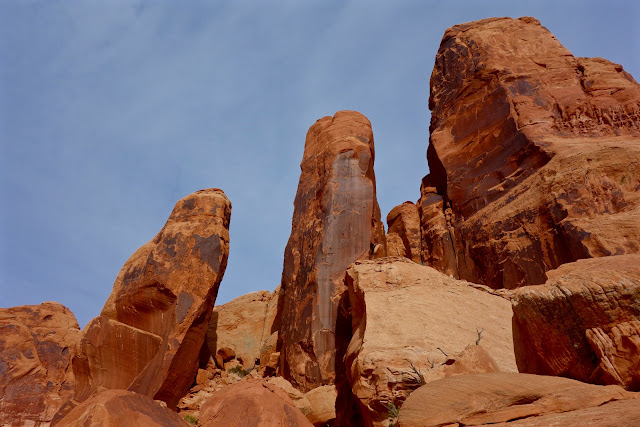 Notice the line of horned spheres. Rory Tyler speculates these are Basketmaker necklaces. These "clan symbols" are prevalent on panels throughout this area and elsewhere around Moab. 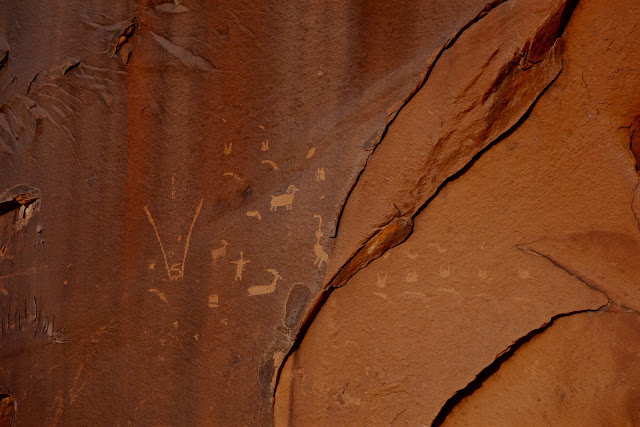 Continuing around the base of the Old Folks' Home, pass a sadly vandalized panel and then a ruin built of limestone blocks. 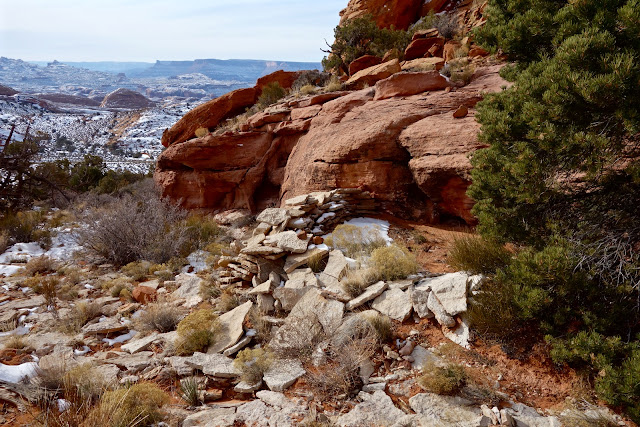 As indicated on the map, we climbed into the amphitheater near the southeast end of the Old Folk's Home. The back wall was ringed with tafoni, making it well worth the scamper. 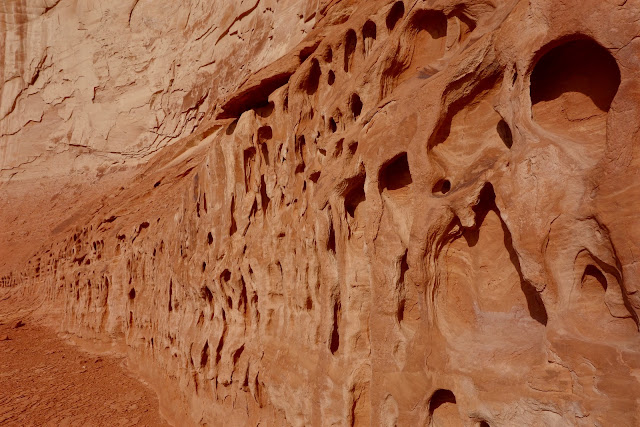 Intersect the Rim Overlook Road at about 5,200 feet and turn left. As the track curves north, follow the Moab Rim sign to the precipice at about 4.6 miles. Today the multiple towers lining the edge are covered in snow so I shy away from venturing further out. The La Sal Mountains under their winter blanket captivate me. But then so do the Book Cliffs, the Colorado River canyon, Moab, and ever onward flowing mounds of slickrock. (THW, photo) 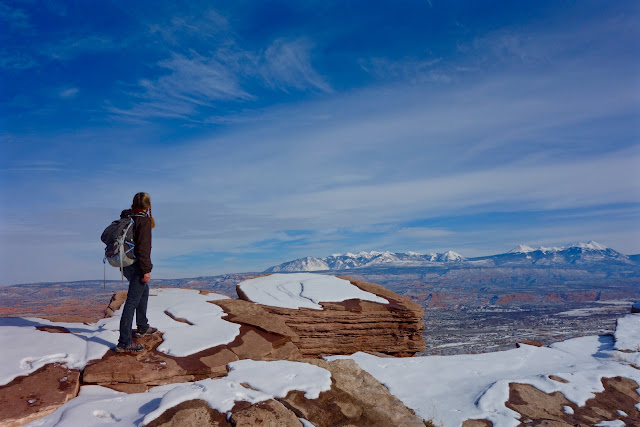 From the overlook, it is 0.8 mile down the road to a signed three-way junction at 4,804 feet. This is where the Rim Overlook Road, shown, meets the Hidden Valley Trail and Moab Rim Road. 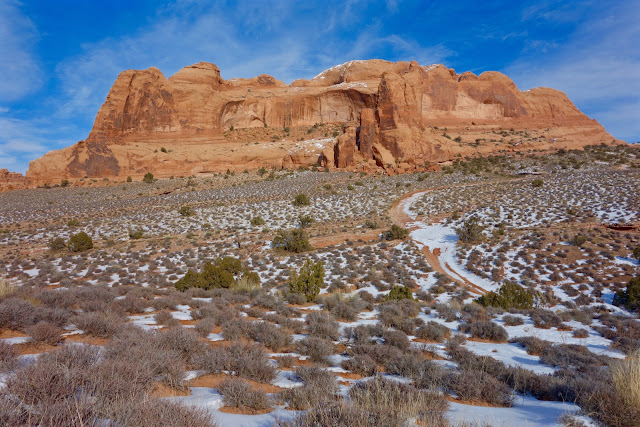 To return to the Moab Rim Trailhead, turn right. In 0.2 mile, go right at the split. This will put you back on your incoming track. On our return down the Kayenta ramp a weak winter sun shone in our faces. The temperature never got above freezing and the Colorado River was shimmering with tiny islands of floating ice. 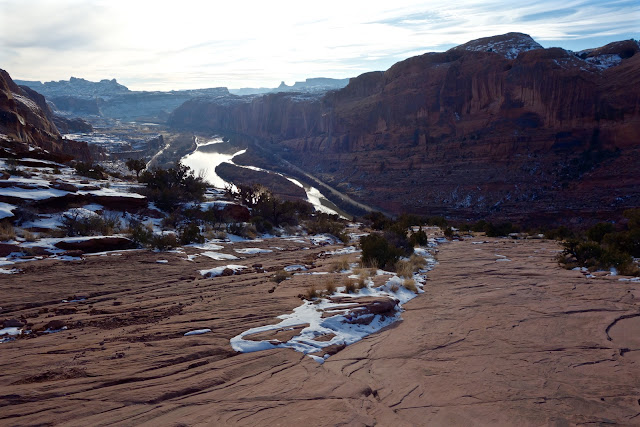 During a visit to Durango, Colorado in November, 2015, Craig Childs said archaeologists feel down the rope of time, one knot at a time. We are feeling down for the oldest knot we can find. People before us left their stories on stone, knots in the rope. I feel grateful to be alive when these sacred images are still visible.

I resist the temptation to interpret seemingly archetypal rock art imagery. Sally Cole wrote in Legacy on Stone, "Interpretation involves making associations between rock art and past cultures and attempting to explain how the rock art functioned and what meaning it might have had to past societies. Explanations of function and meaning are tentative because the imagery is out of its living cultural context and archaeological records are fragmentary. Prehistoric rock art is perhaps best interpreted as part of communication systems wherein information is presented and exchanged, group identities are reinforced, and places and events are integrated into the histories of peoples. This draws on the strength of rock art--it is fixed in place and can be studied in relation to the site, local community, and the larger cultural landscape in which it was displayed and observed."

Posted by Debra Van Winegarden at 7:54 PM No comments: