Geologic time!  How the striking of the great clock whose hours are millions of years, reverberates out of the abyss of the past!  The youth of the earth is in the soil and in the trees that spring from it: its age is in the rocks.
John Burroughs, 1911

We lay upon thin pads borne by stone, faces to the thickly crowded starfield, measuring thirteen hours of true dark by breath and heartbeat and the rotation of the siderial clock. Cold clarity, absence of moon, the night sky with its archway of light was the best either of us had seen in decades.  Jupiter, King of the Planets, crossed the outer sky, a commanding yet comforting reliable orbiter of time.  Unbelievably, his orange brilliance was trumped on two nights (only momentarily) by exploding fireballs that separated into multiple meteors before appearing to plow into the South Rim very near Desert Watchtower.

I have a policy: no backpacking between November and February.  The firm grip of absolute night yields reluctantly to those precious hours when one may walk.  Still, here we were on the Escalante Route in the Grand Canyon between Tanner and Grandview.  We were fortunate to hold a permit at all but our allotment of a mere five light-deprived days left little time to explore.  My dream of Rim conquest via 75 Mile Creek and Papago will be realized in another season.  Delight was plentiful enough. As my companion observed, our trip was, "...full of capricious accident, and risk and reward, and all the effort and insecurity that makes life worthwhile."

November 21, 2011, Lipan Point. The moment of beckoning; two wanderers hear the river's call from the chasm. 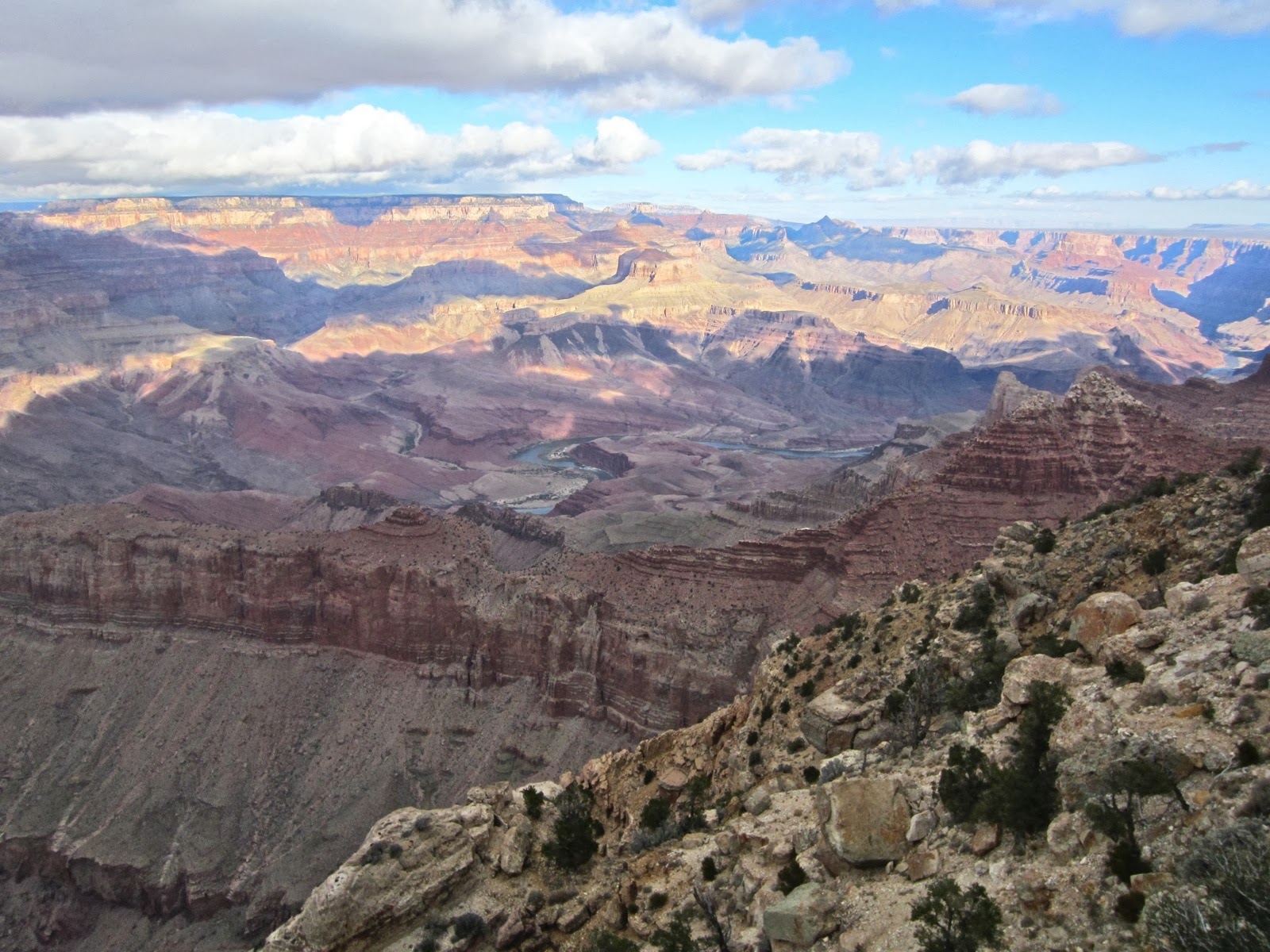 It is a roughly 10 mile, 4,600 foot descent on the Tanner Trail to the river.  Here, we have passed through the Redwall and now must wait until our final day to do so again returning through brilliant reds below Horseshoe Mesa.  The tenacity of this limestone that renders passageway infrequent, the audacity of the rock!  It is my favorite canyon formation. 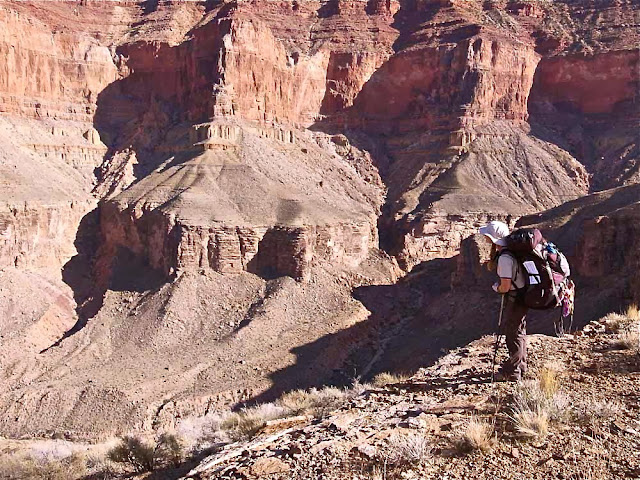 Hilltop Ruin at Unkar, is an ancient, stoic observer of the river and the boats she carries.  Great allures of this trek are panoramic vistas and the Grand Canyon Supergroup.  Comprised of nine layers, lavishly double red Dox Sandstone predominates in the Tanner region. 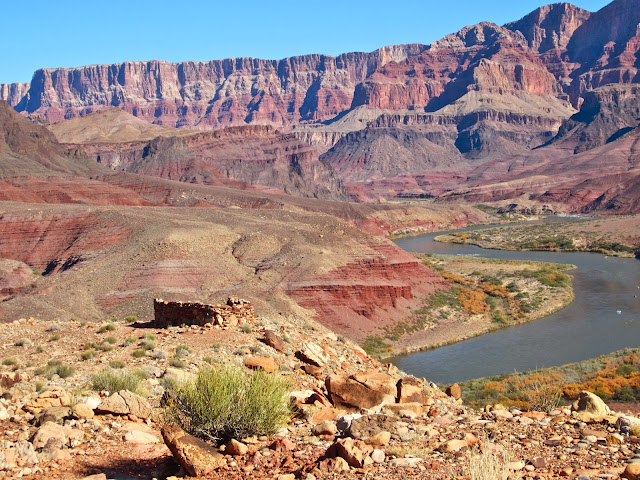 The Grand Canyon traveler must be willing to walk on ever-so-thin edges and ledges. Find the skinny trackway on the far hillside made of Canyon Spice, the color of paprika and cayenne.  Careful!  The exposure is hot. 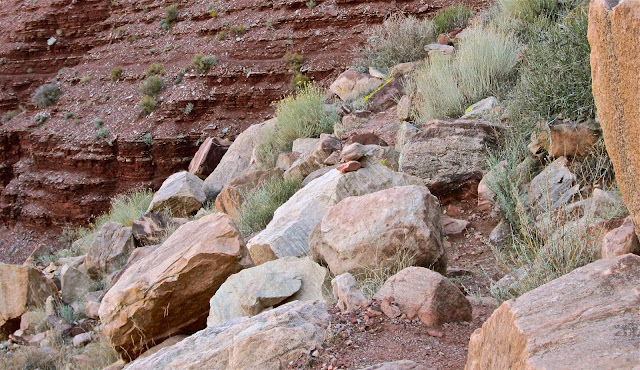 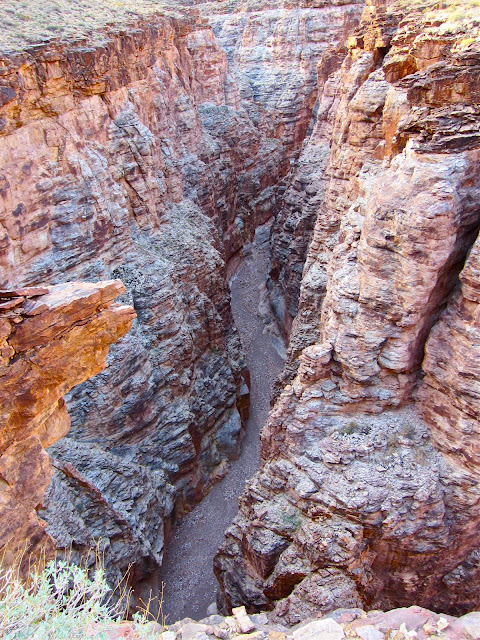 Minuscule platforms in a slippery Shinumo Quartzite bowl provide sufficient purchase to descend into 75.  Another Supergroup formation, Shinumo is as beautiful as it is uncommon. 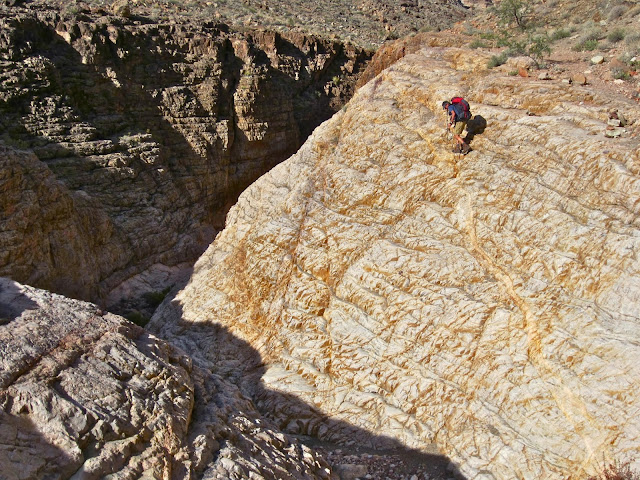 75's constricted corridor compels one to the river (so slowly). 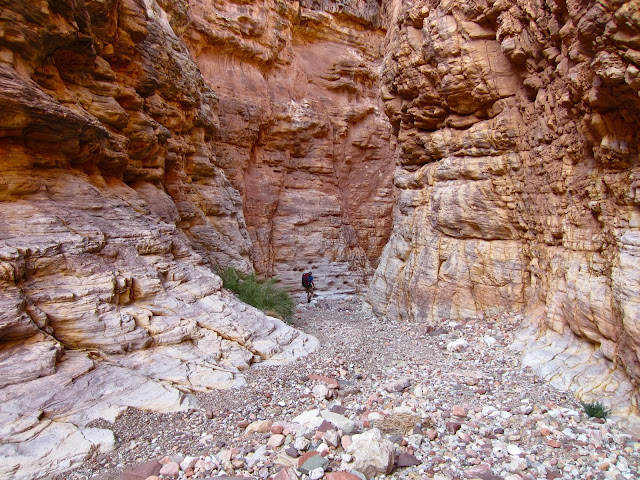 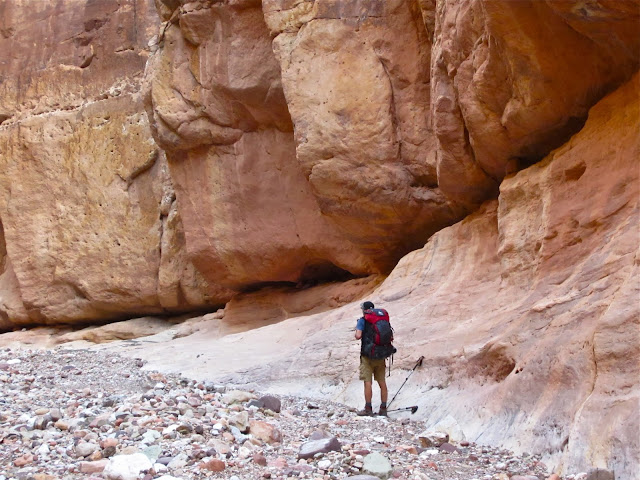 The Colorado River, canyon-cutter, from the top of the Papago Wall just before a fun scramble (note, some find it alarming) down a rubble-filled gully and onto the treadway seen below.  Hance Rapids, the terminus of the New Hance Trail, is in the distance.  The Escalante Route wends for miles along the river. Ah the luxury of plentiful water while hiking in the Grand Canyon, so rare, so cherished. 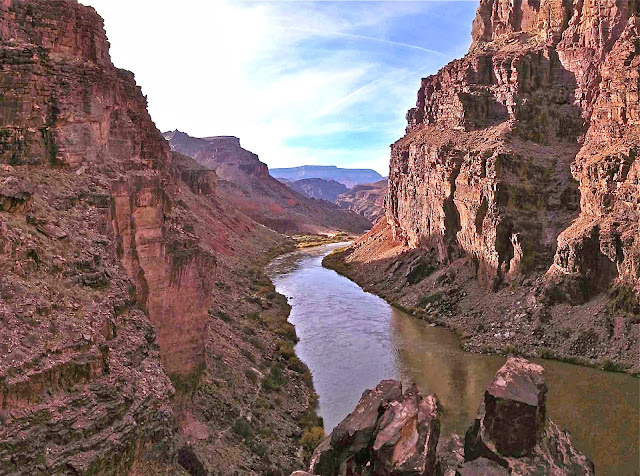 Even on Thanksgiving Day, in the Canyon rocks are still rocks and the roar of the river drowns words of wonder while a dyke of Cardenas Lava pierces Hakatai Shale above Hance Rapids at the mouth of Red Canyon. The hulking spire is simply the lesser end of a ridge spoking out from Escalante Butte. 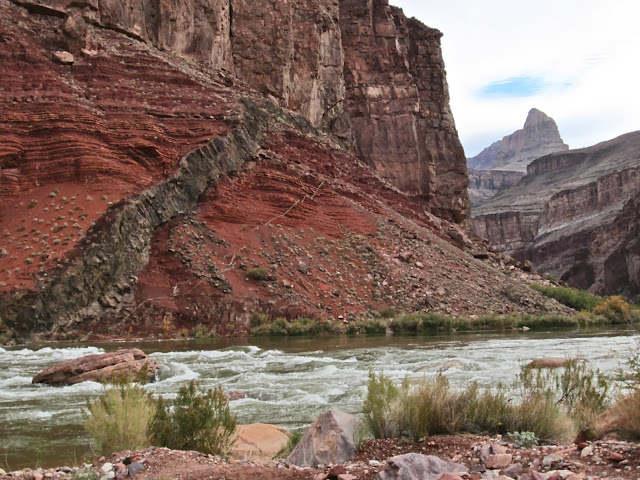 The Supergroup meets up with 1.7 billion year old Vishnu Schist injected with Zoroaster Granite down in the basement of the world at Mineral Canyon and Granite Gorge. 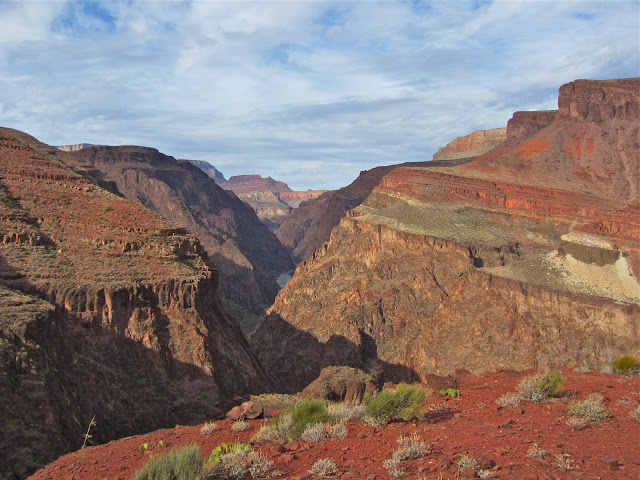 From the Tonto at Mineral's edge, ever visible Vishnu Temple, guardian of our days, with its Coconino summit holds down familiar Canyon formations and a dwindling wedge of Supergroup sandwiched between Tapeats and Schist.  We wolfed down a most delicious Thanksgiving dinner at Hance Creek: chicken, potatoes, stuffing, gravy, peas, cranberries. Just-add-water and heat! 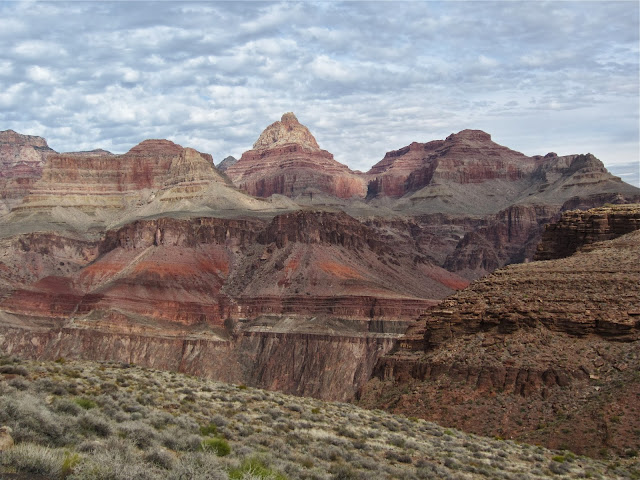 Circuit and summit the iron red Supai butte on Horseshoe Mesa.  Too much to hope for but not too much to ask, and joyfully receive. We finagled our way up through blocks on the north side until we reached the impenetrable 50 foot cap rock shown here. Cautiously we crept, circling around the never-ending butte on a rather frightening ledge to the rift at its east end. 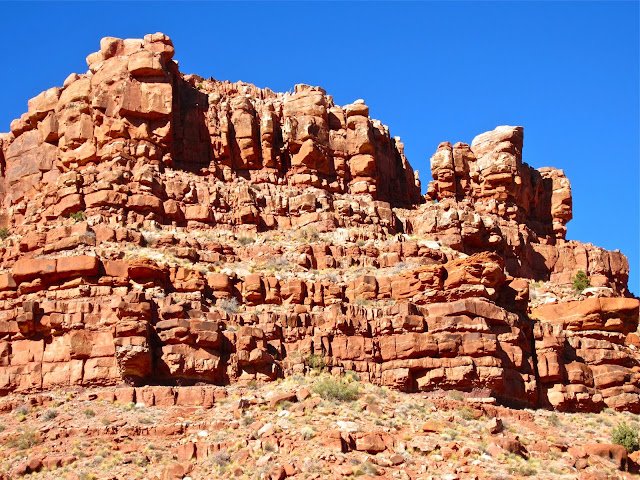 In this weakness was the only plausible route, a Class 4, lean-out climb.  The bravery of the scout must be recompensed.  Using excellent hand holds for the height impaired, I just managed to join him on the generous and welcoming summit. 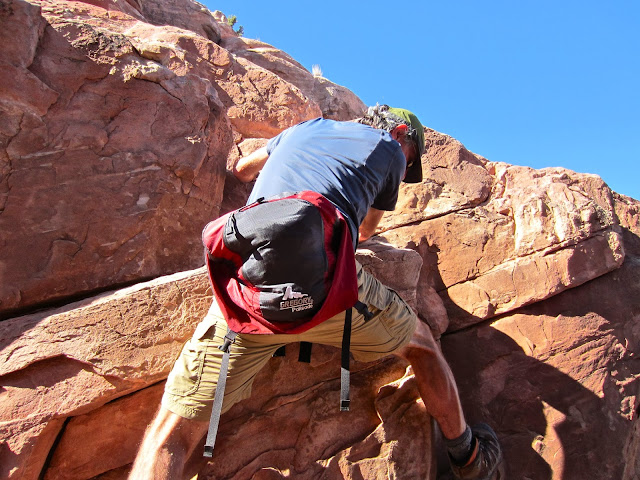 From Grandview Point, our destination. In the cavernous space is a canyon of intimidating immensity but nearby in the center of the image I can't help but notice a Coconino ridge and butte anxious for a future visit from appreciative travelers.  Next time, perhaps.  And that is how we come to know this mind-numbing place, a human portion at a time.

Posted by Debra Van Winegarden at 1:36 PM No comments: