The Colorado River is the West's Great Receiver. Rivulets that percolate from mountains and canyon widening torrents, they all contribute to The River. The Grand Canyon is intricate and immense. It justifiably consumes the lives of its most devoted explorers, the "Grand Canyon obsessed." I spent a week with five experienced canyoneers, passionate people who anticipate and embrace the arduous. Established trails have long past seen their due and now obscure routes and remote destinations remain. Our intention for this week in upper Nankoweap was to descend the rarely traveled Marion/Seiber Route and to visit Kolb Arch.

Conversation pivoted around our feet. Recollections of past hikes, strategies for adventures in our dreams. We rehashed debacles and glanced over successes. Like chemistry and music, hiking tales are a universal language we all comprehend. And while my heart is anchored in the more diminutive canyons of Utah, I too understand the need to explore a particular region thoroughly, and the feeling of betrayal if one strays too far from the landscape of desire.

We spent our first night beneath old growth ponderosas near Saddle Mountain to position ourselves for our three mile, 3,200 foot drop via the Marion/Seiber Route to the Mystic Falls tributary of Nankoweap Creek. In 1996, Doug Nering documented the nuanced navigation for this "Freefall Route". We were supremely fortunate to have Doug guide us instead of consulting him on slips of paper. It took almost eight hours to wend our way down brush choked Supai cliffs; ferret out the multi-stage Redwall descent replete with a frightening, roll-off friction traverse; and revel in Muav ledges and blocky scrambles. Our journey was both tedious and exhilarating. We made up for our first doggedly slow mile by veritably gliding down the dry, rocky streambed runout into camp.

The Nankoweap, or Tilted Mesa Trail, is the standard treadway into the multi-armed Nankoweap drainage. An unmaintained trail, it has a lively and notorious history. And yet, our route down the cleft between Marion and Seiber Points is the passage created by nature and time. It was an honor to pass this authentic way.

Thrashing down a brushy break in one of several Supai cliff bands. (Doug Nering, photo) 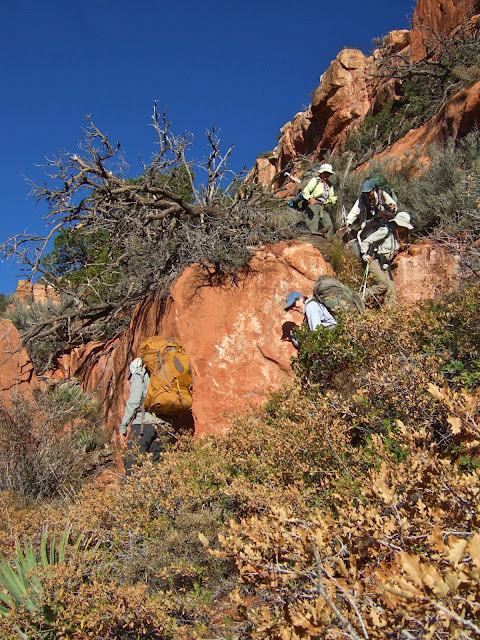 Redwall cliffs have few weaknesses. On the Marion/Seiber Route there is one, and only one, way to walk through the elaborate limestone maze. (Doug Nering, photo) 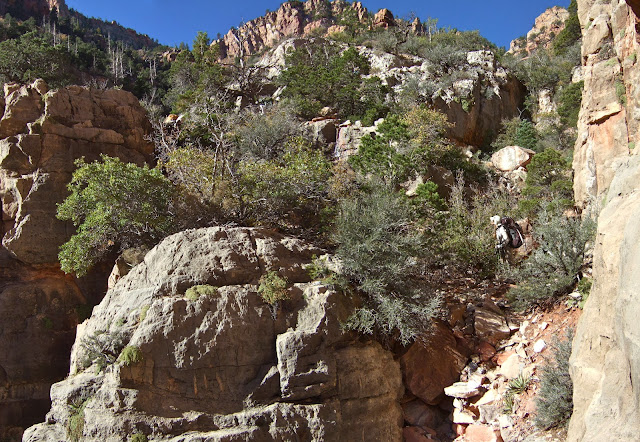 It is counterintuitive but we climbed over this thin Redwall fin via a two-foot-wide pass, photo center, and slid down a steep, rubble filled gully. (LA, photo) 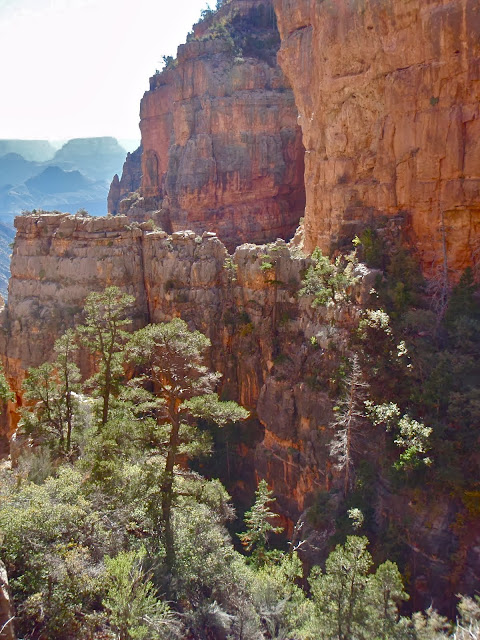 The next day, we explored the Mystic Falls arm of Nankoweap Creek, visiting archeological sites and the waterfall. This shy, well named cataract only shows a portion of itself from any vantage point. Tricklefalls continuously coat a thick cascade of verdant moss. 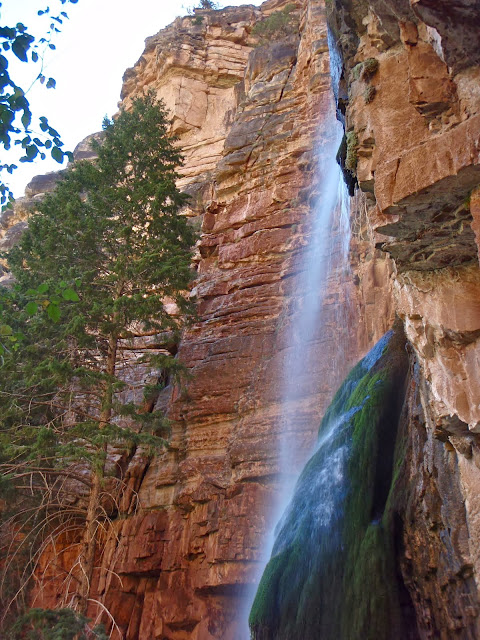 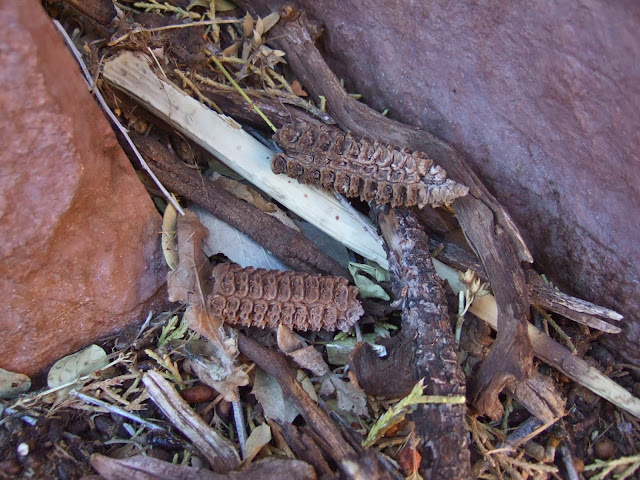 Kolb Arch was the centerpiece of our backpack. While we'd been warned that getting to the arch was a sufferfest, we did not find it so. Rather, we had a playful, even joyful day, sharing the lead, strategizing our way around a major pouroff in the Tapeats, scrambling up boulder obstacles in the drainageway, and perfecting the route on our return. Our first view of the herky and squared off arch was from a mile away. Can you find it? (Doug Nering, photo) 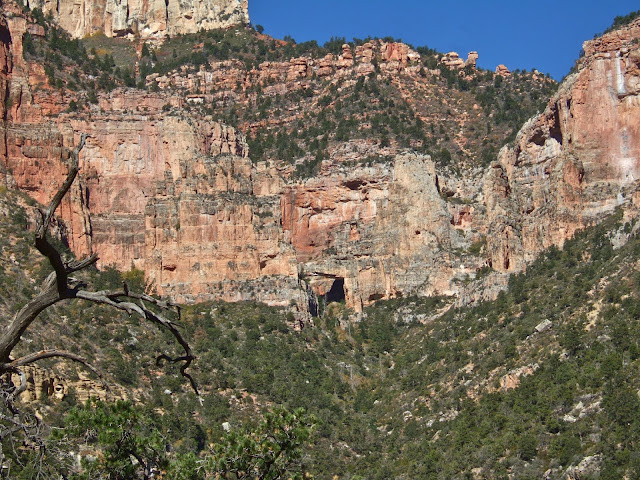 The limestone arch is tucked beneath a massive Redwall amphitheater. Autumnal maples on the canyon floor mimic apricot-colored support walls. Beneath the span is a vertical arc of grey and scarlet stone. (Doug Nering, photo) 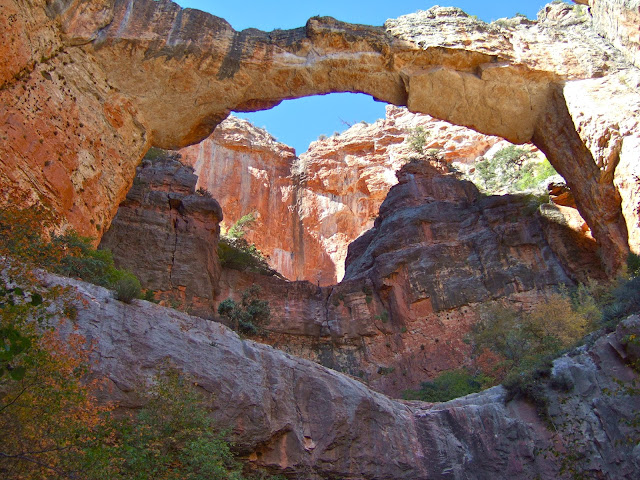 My personal sufferfest was carrying a big pack through the ridiculously choked Nankoweap Creek. Razors slashed my skin, barbs yanked out tuffs of hair while I hopped upon slippery boulders. We strayed when we could to blackbrush and sage benches above the creek where walking was easier. We were rewarded by scattered archaeological sites. Unprotected by alcoves, some crude walls remain but the structures were not as persistent as lithics and pottery sherds. The remains of everyday ware were scattered on the ground as if pots were deliberately destroyed only yesterday.

The surface of time. Remnants of an orange corrugated pot are laying just as they were left, possibly a thousand years ago. 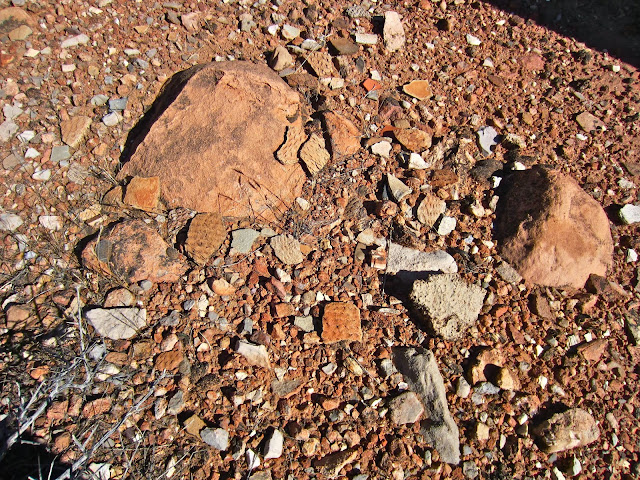 The Canyon strips time of modesty and flaunts its handsome and bawdy nakedness. The Butte Fault scrambled and jumbled orderly formations and so we began our climb out of the canyon on a rubbly, marbly, scrabbly, path to our dry camp on Tilted Mesa where we slept on the fault's crest. The skybowl unobstructed, we marked Sidereal time by the steady progression of the Pleiades, Jupiter, Orion, and in the deepest dark, Venus.

Formations reveal time. A now familiar landscape as seen from the Muav Overlook on the Tilted Mesa Trail. (LA, photo) 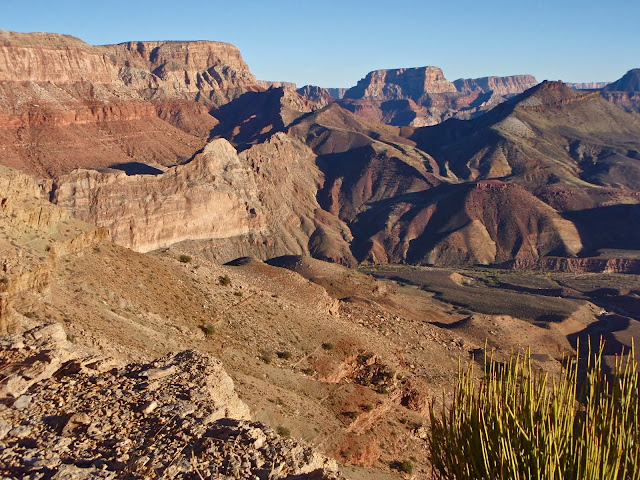 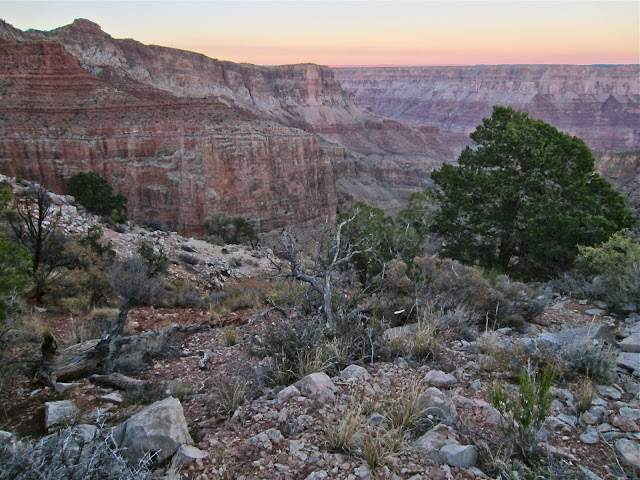 The Nankoweap Trail was originally an old Native American route to the river. John Wesley Powell employed a trail crew in the 1880's to improve it. It was used in 1922 for the Great Kaibab Deer Drive, an attempt to herd 10,000 deer from the Kaibab Plateau to the South Rim.  I adore this pathway, so quintessentially Grand Canyon. A thin, red thread in the Supai, the trail platform yields a place for a single foot, no more.  Exposure varies between 10 and 150 feet. We walked mindfully through historical time. 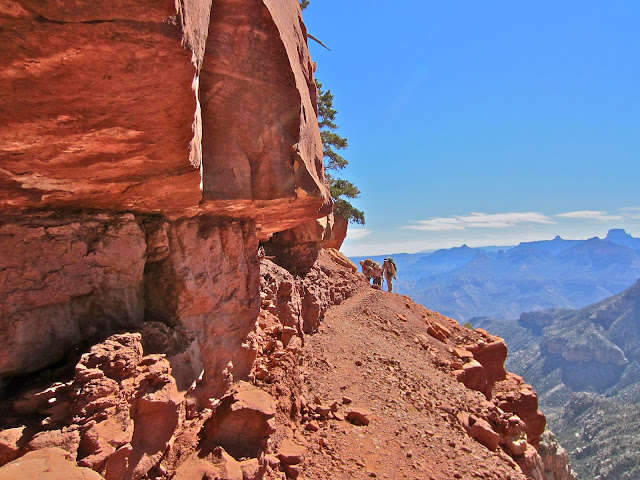 On my journeys, I sense that Earth pines for communion with appreciative humans. Off the standard route, Apache Plumes show off generations of blooms without the enjoyment of human accolade, stones suspended in time and space yearn for touch. And so we hesitate, admire their comeliness, absorb their presence, and, thus, bring The Canyon home.

Posted by Debra Van Winegarden at 11:53 AM 2 comments: