Essence: A straight-forward, no-nonsense approach to West Babcock utilizing a couloir where rocks aggressively tumble underfoot.
Travel: From the US 160/550 intersection in Durango, travel 11.0 miles west on US 160 to Hesperus. Turn right/north on La Plata Canyon Road, CR 124, and measure from there. After passing the hamlet of Mayday, the road turns to smooth dirt at 4.6 miles. There are several established campgrounds in this area. Park on La Plata Canyon Road at 8.1 miles, just past Boren Creek, and about 200 feet before FSR 794.
Distance and Elevation Gain: About 7 miles, 3,560 feet of climbing from La Plata Canyon Road, elevation 9,240 feet.
Actual Time: 6:40. It may take you less time since two in our group summited Middle Babcock as well.
Difficulty: 4WD road, off-trail past the mine; navigation moderate; Class 3 scrambling; narrow, steep couloir with rolling rock.
Map: La Plata, Colorado 7.5' USGS Quad.
Date Hiked: November 17, 2007
Quote: Do or do not. There is no try. Yoda 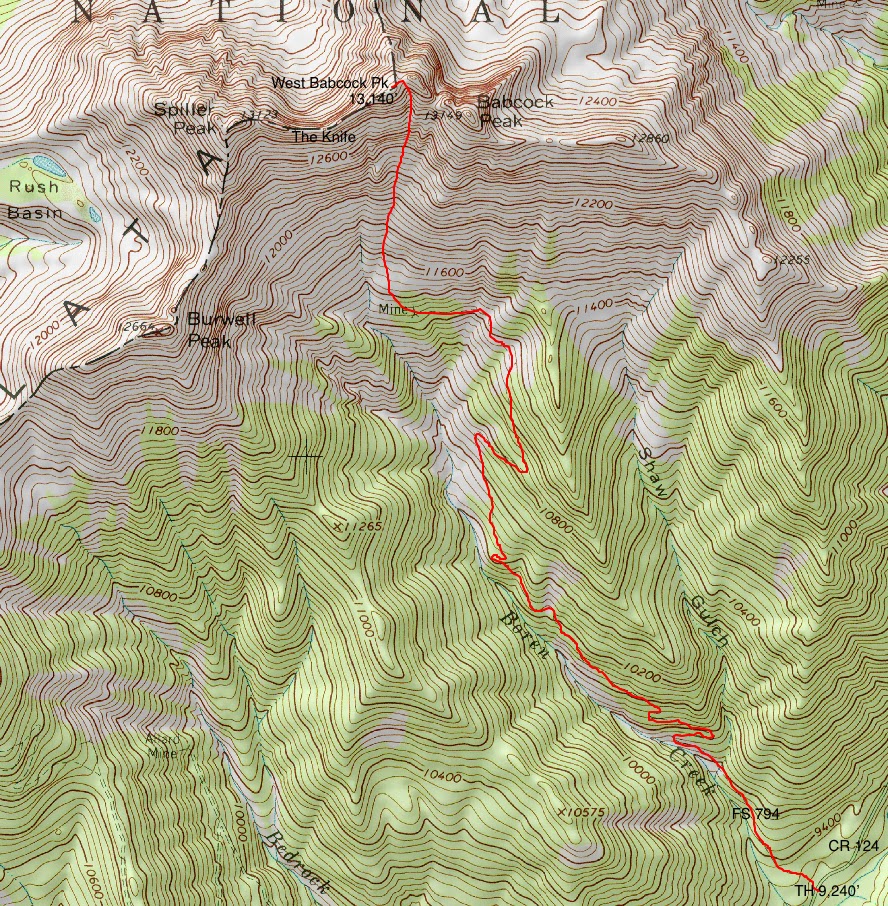 Route: It is a pleasant, quick, not quite three mile walk up the old mining road to almost 11,320 feet. At the mine, identify the four peaks of the Babcock cluster. In the photo below, East Babcock is on the right; to the left of it is 4th Crest, a rounded block; Middle Babcock is just left of 4th; finally, West Babcock has the smooth face. To the left of West is The Knife. Now, note three couloirs in the image. The route goes up the center slot that curves slightly left in the shadows, just west of Middle. Leaving the road, climb up the grassy, rock strewn slope to raw talus, and then reach the couloir.

Note of Caution: In 2016, I witnessed two, 3 X 3 foot cubes of stone crack from a Babcock couloir and, gathering more boulders, bounce-fly at 60 mph down the center of the basin where I had been moments prior. They skidded to a halt just shy of the 4WD track. It was a narrow and lucky miss. Please be fully aware and understand this location is particularly dangerous.

It is best to do this climb with no more than two people because rock in the couloir is on the move. All of the stone chunks on the floor are abraded on every face and facet. When you step, they slide and tumble. We used the right wall most of the way for essential hand holds. 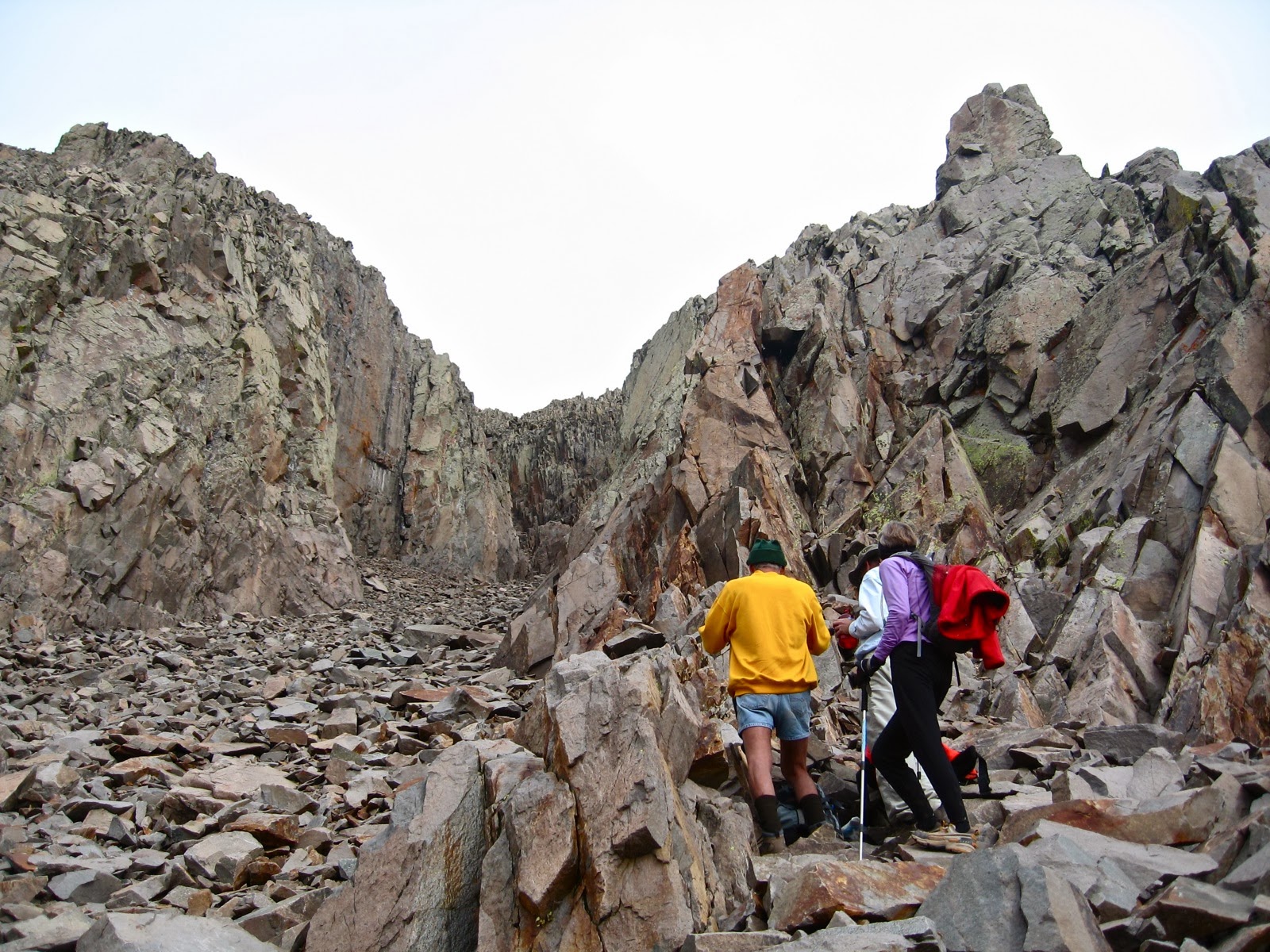 Our rolling slot narrowed and steepened. The crux is obvious. It requires Class 3 moves on bedrock covered in gravely dirt. One companion observed, "This is the mother of all couloirs...the hardest climbing in the La Platas." Be patient and mindful and you will come to the saddle between Middle and West Babcock. While you cannot climb the vertical wall to Middle from here, there is a stunning window to Hesperus, Lavender, and Moss. 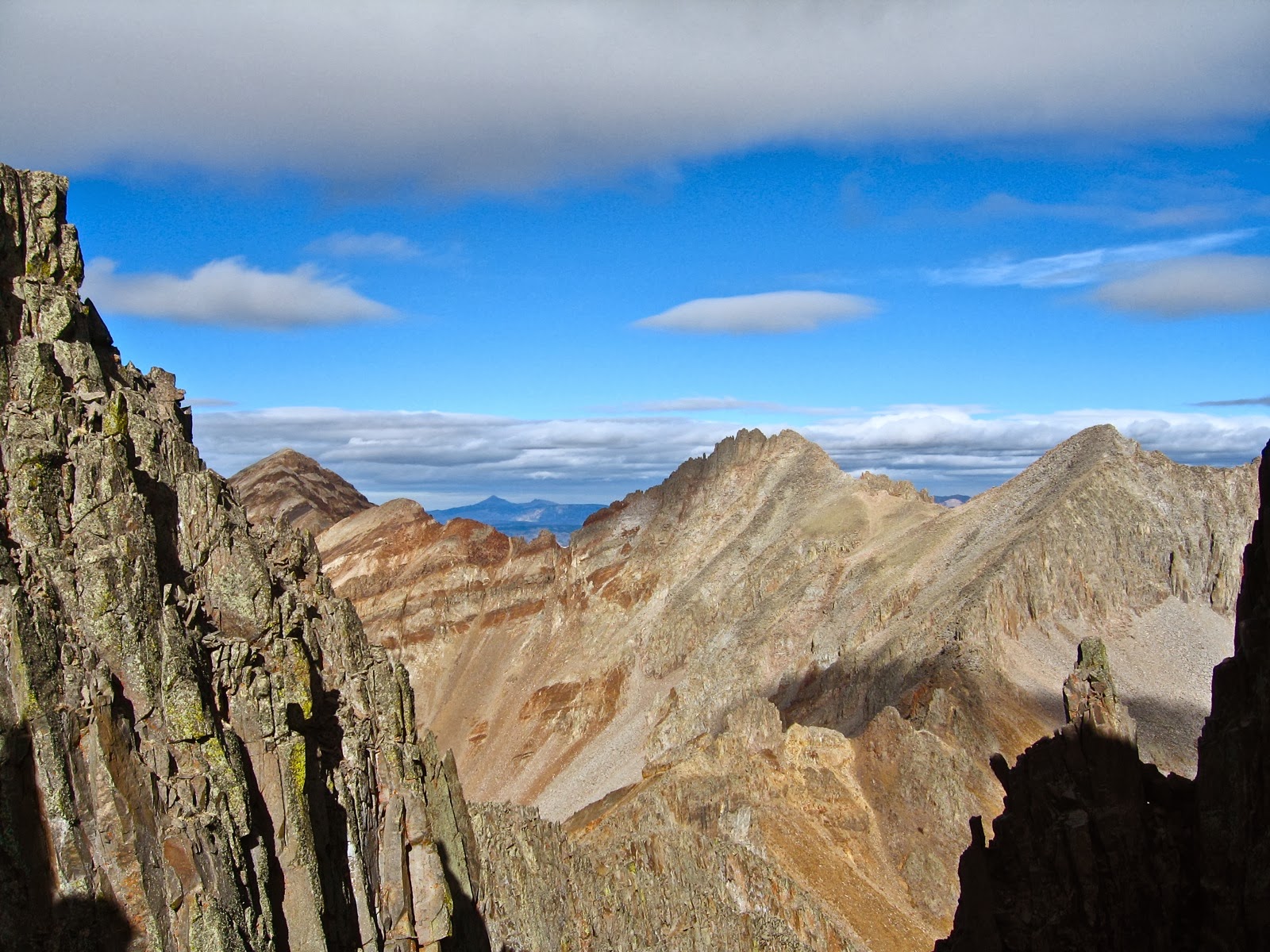 From the saddle, it is a relatively simple climb to the summit of West Babcock. Ironically, it was in this section that one person kicked loose an eight inch rock that flew into my shin and knee. Only 100 feet off the summit, I'd paid too dear a price in the couloir not to reach the peak. West is not the highest of the Babcocks, and the topo does not even note its height, approximately 13,140 feet. Middle at 13,180' feet takes the honors. And yet, West has its charm and unique character as third brothers will.

We retreated down the couloir as we'd come, more easily now, using the east wall again for support. I was able to stem the gap at the crux. We passed a secondary couloir leading to the left and two members of our group used it to gain access to Middle Babcock. While it was our intention all along to climb both peaks, answering the question of why we were in the couloir in the first place, it is wiser to give Middle Babcock its own day from a different route. Our determined companions kicked loose three substantial rock slides proceeding up the thin gap towards Middle.

Looking down on La Plata's Mother of all Couloirs. 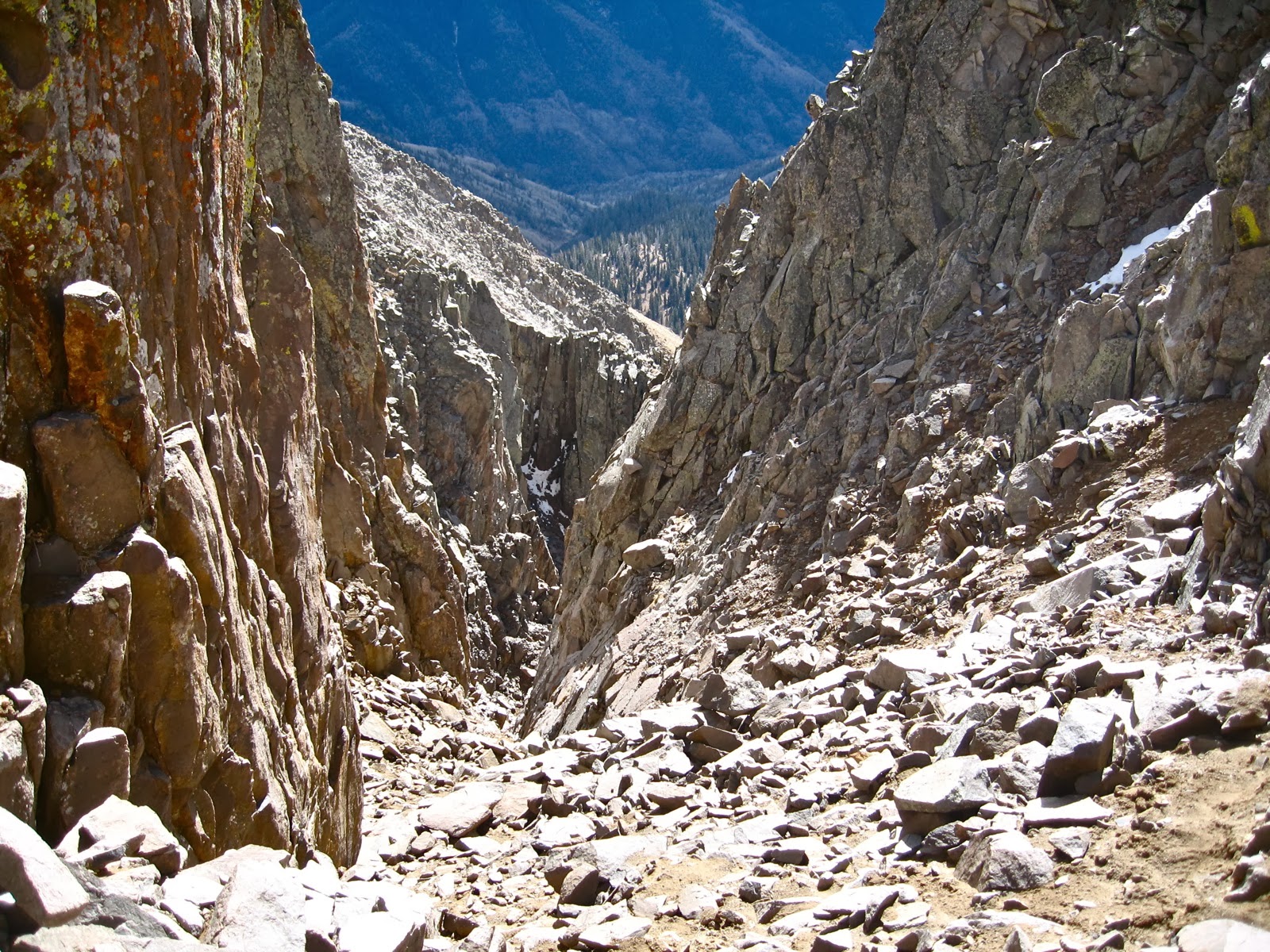 For an alternate route up West Babcock, more reasonable and pleasant, see The Knife.
Posted by Debra Van Winegarden at 12:17 PM No comments: