It is 378 miles from Durango, Colorado to Rocky Mountain National Park. Untroubled by traffic and wind, captivated by some of the best scenic beauty in Colorado, the miles flew by effortlessly.

The San Luis Valley is at its finest this time of year. Farmers were mowing and bailing. There were single rectangular hay bales strewn all about, defined by shadow and sunshine, and gigantic stacks of bales that looked like bricks of gold. Indeed they are. The harvest was surprisingly abundant. Open trucks were brimful with potatoes. The Sangre de Cristo Mountains were silent and serene in the east but the San Juans had clouds jumping up and down on their tops to the west.

On Highway 9 North towards Kremmling, my truck rolled along the Blue River which bifurcates a green valley. Black cows ranged beside a red barn with 15 deer, elk, and moose racks mounted about the entrance. Their antlers looked strikingly pointingly similar to the grey sawtooth peaks in the west.

Almost to Granby, I entered a 35 mph gorge road paralleling a mere trickle stream. The Colorado River! Does this great carrier of western waters begin in the park I wondered? I felt a sense of exaltation when a friendly ranger welcomed me to Rocky Mountain National Park mid-afternoon.

Four cow elk grazed in my site at the Timber Creek Campground the following morning while a bull elk bugled a few feet off in the trees. Two resident campground moose tore at willows on the banks of the headwaters of the Colorado River. It had rained lightly until 11:30 pm, clearing to reveal the realm of stars.

I debated the wisdom of riding my bike since at 8:15 when I took off from camp the sky was 99% covered in cloud. I'm so glad I took the chance but the clouds played their part in keeping me from going up and over all the way to the east side, a 64 mile ride round trip. Trail Ridge Road is my new favorite, a perfect biking roadway. Traffic was light, and while the road went well above timberline, it was a full two lanes wide and buttery smooth. Seriously, there are no imperfections on this Colorado show-case byway. Switchback edges were lined with rock walls. Retaining walls on the uphill slopeside were carefully sculpted. It was a little exciting in places (precipitous) but I just took the room I needed.

The climb began gradually then pitched up in the switchbacks where you can look down on three levels of asphalt at once. It was 6-7 mph steep in places. I gained 3300 feet in the first 14 miles to the road's high point (12,183'). Then I flew down to Iceberg Pass and back up to Rock Cut. The ride accumulated 4100' of climbing, 34 miles.

Trail Ridge Road is not plowed in the winter and for good reason. Winter is long. In fact, for every 100 feet in elevation gain, spring comes a day later and autumn, a day earlier. So if Estes Park, the eastern gate to the park is at 7,522 feet, winter lasts 112 days longer a few miles up the road. Further, the highest surface wind gust ever recorded was 221 mph on Mount Washington. Longs Peak was second at 201 mph. Winds of 115 mph have been recorded on Trail Ridge.

The Alpine Visitor Center at 11,796' is past the next switchback and a few hundred feet above treeline, typically about 11,500' in Colorado. 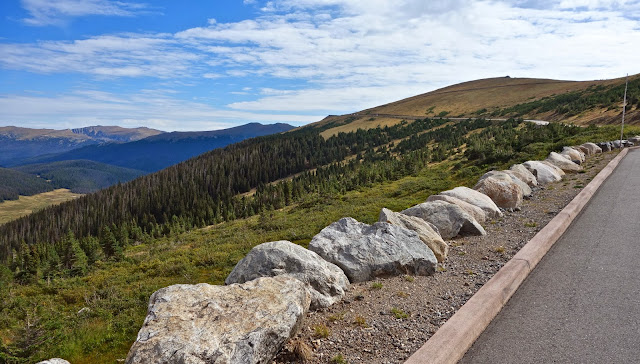 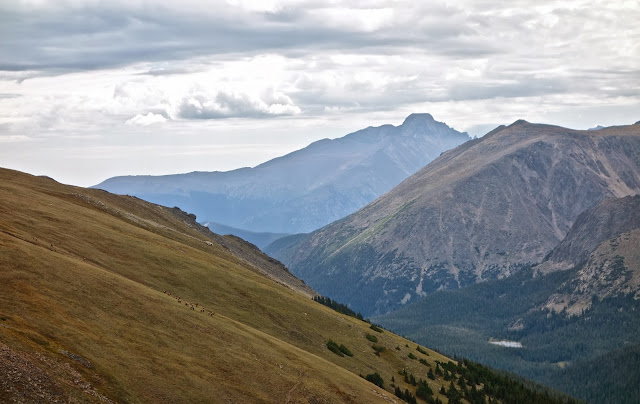 Royal elk grazing within yards of the road. 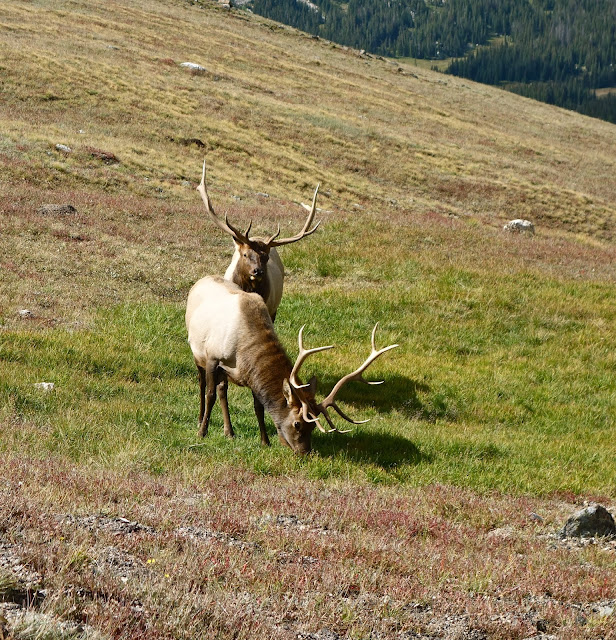 Curiously, the Great Divide is part way up the west side of Trail Ridge. As a Westerner, the Divide is the defining edge of my universe. 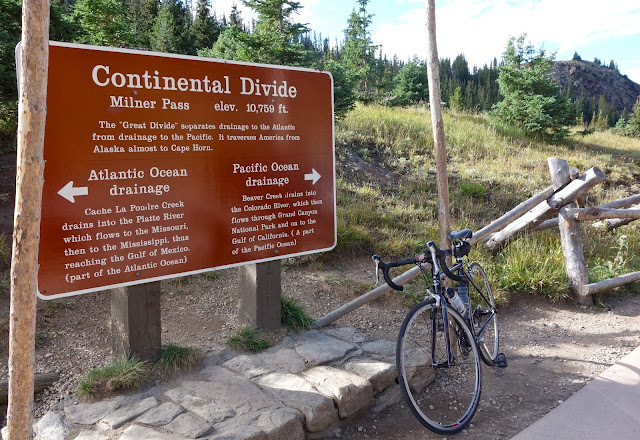 On my second day, I climbed to Mount Ida which resides right on the Continental Divide. While my map does not indicate a trail, it is actually very well defined until the rock fellfield where the way becomes self explanatory. 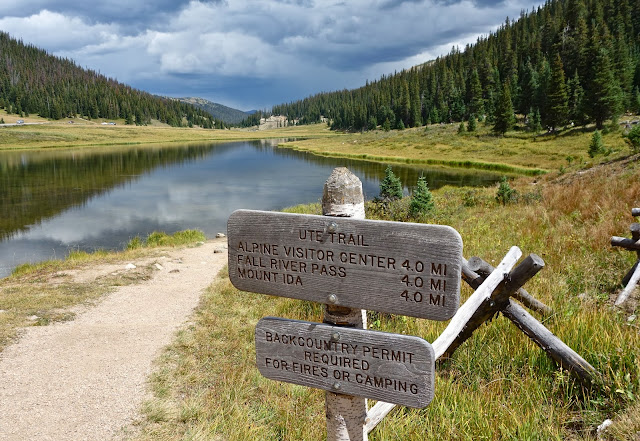 Ida is the highest peak, 12,889', off in the distance. The rolling tundra was so easy and pleasant. I spotted eight pikas, two marmots, and four royal elk. 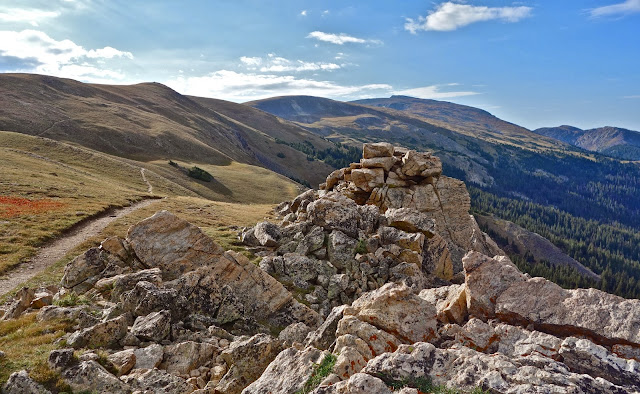 The drive from the Rocky Mountains to the Grand Tetons transpires on empty roads crossing empty country, Wyoming. A single windmill or horse on the crest of a hill is an event. I slowed for a pronghorn and found another seven grazing town grass in beat up Jeffery City. I was passed occasionally by cowboy hats driving dually guzzler trucks and Lincolns. 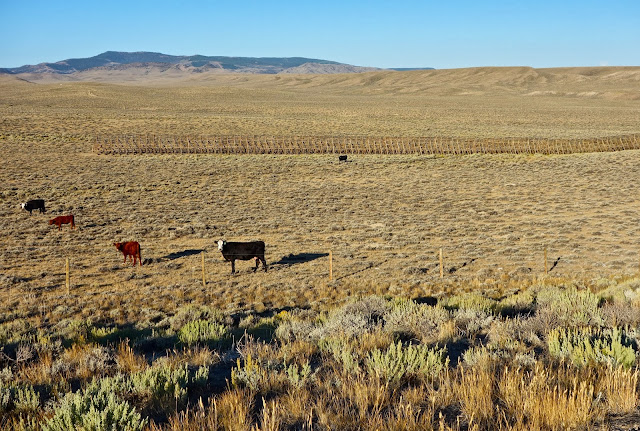 The first view of the Tetons left me gasping out loud. The range looks like a fantasy, jutting and weird and ridiculously high and startling. 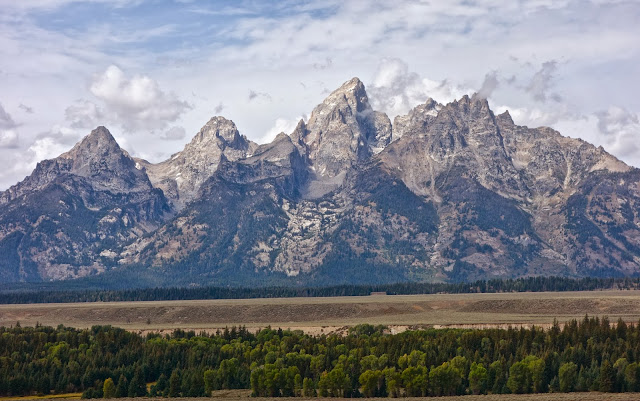 Moran Peak in the morning before 100% cloud cover. 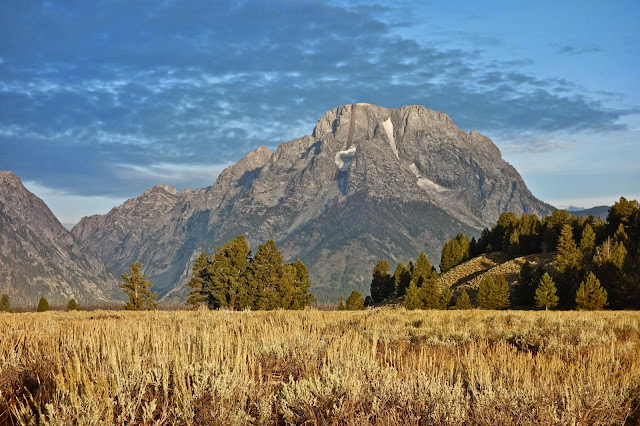 The climbing ranger recommended Static Peak as a good solo hike. But really, a super long hike on a day that had a 90% chance of rain by early afternoon? No problem, he said. The narrow road to the trailhead was gridlocked because of an exhibitionist bear eating roadside berries. Many people, even more people, with long-lensed cameras were shooting. It made me smile to see their reaction to this hungry bear but consequently I didn't get hiking until 8:39. I didn't see another person until mile 7.7 and then it was three teenage girls from Jackson climbing their first Teton peak. They needed to be redirected to the proper route.  Clouds shrouded neighboring peaks but the girls and I exchanged cameras and with patience, got a few pictures. The weather was a little disconcerting but it never did rain for which I was exceedingly ecstatic. The Teton Range is made of ancient rock, schist and gneiss 2.68 billion years old, but the range itself is quite young, uplifted relatively recently and glacially carved. I lucked out on this inaugural hike and will be back for much more: 16.2 miles, 4,800' gain, 7:20 total time, on a perfect trail to within 500' of the peak, then an easy ridge climb.

From Static Peak, 11,303', Timberline Lake and the Grand Teton cluster in the background. 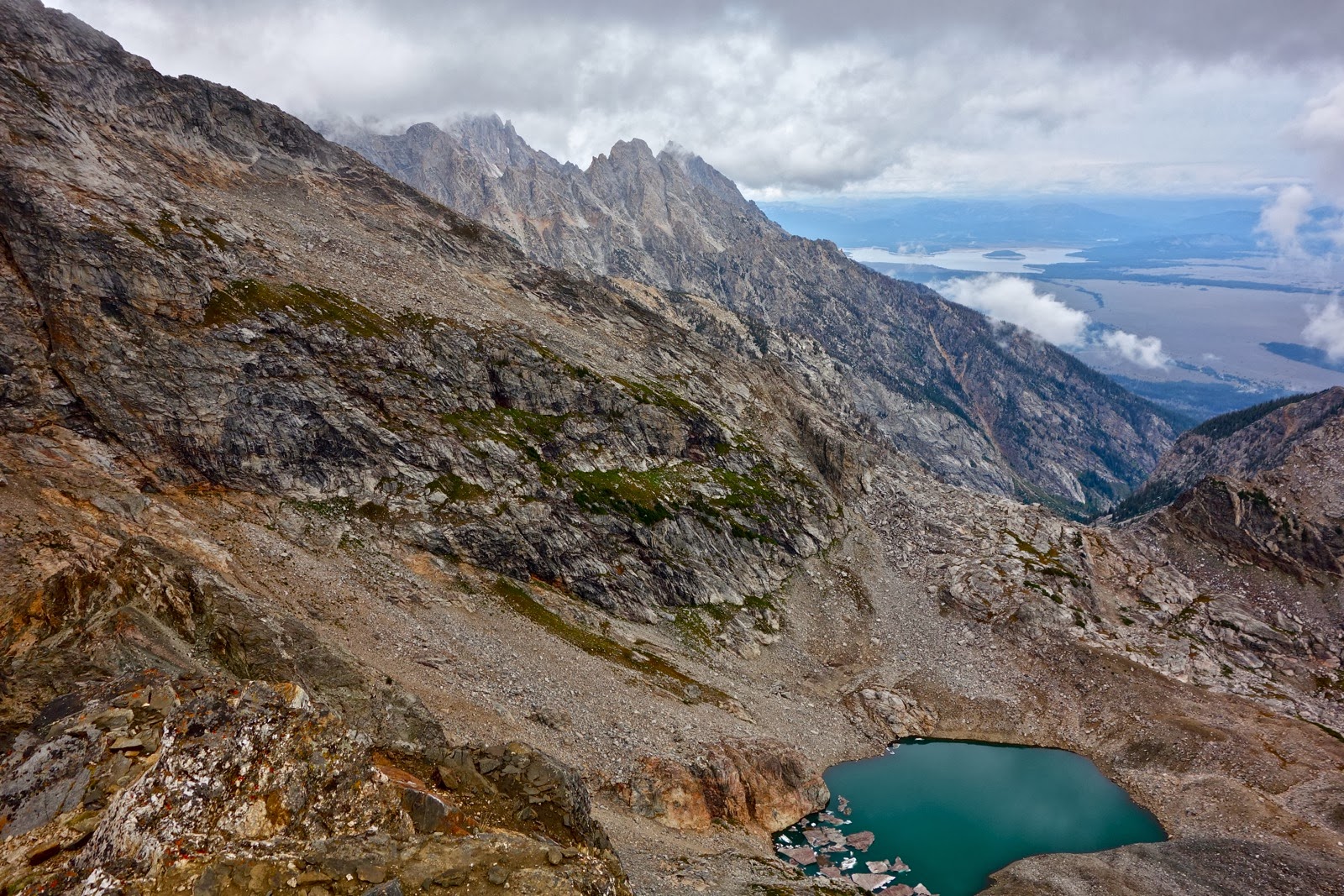 If I'd known then as I do now that there are grizzlies in this park I wouldn't have left the parking lot. 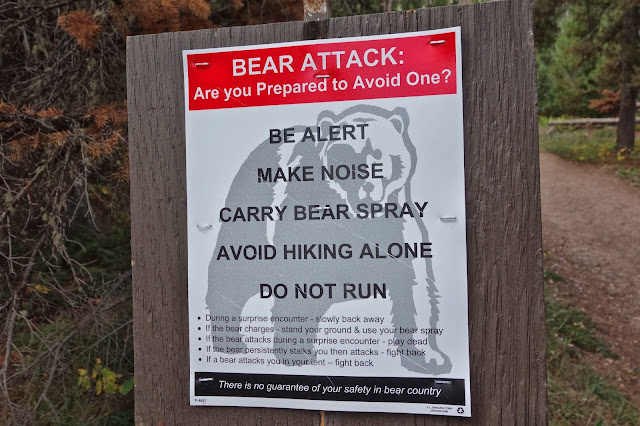 Gros Ventre is the perfect campground. There were plenty of empty spaces to choose from and friendly, quiet people. It's the sort of campground where couples ride around on townies, smile and wave.

It rained every afternoon and throughout the nights of this trip, a little unexpected for September. There was a steady downpour on my final night; it rained so hard it leaked inside my topper.  In the morning I pedaled the five miles to the bike path hoping to get a photo of Static Peak since it was shrouded after my hike. But the valley was stubbornly cloaked in fog. I came upon a wild bison herd. Needing to pass through, a local woman rolled the window down of her van and said, "Either get in my van or hang on to the mirror." I rode by her side and came within five feet of bulls as we plowed through the pack. On the way back, I waited for a break and shot photos. It was worth the chilly ride to see these magnificent beasts of the American West so close. Of note, the idyllic bike path goes from Jenny Lake campground (most always full) to the town of Jackson. I rode by the Jackson Airport, the only commercial airstrip in a national park, or so I was told by a prideful local. 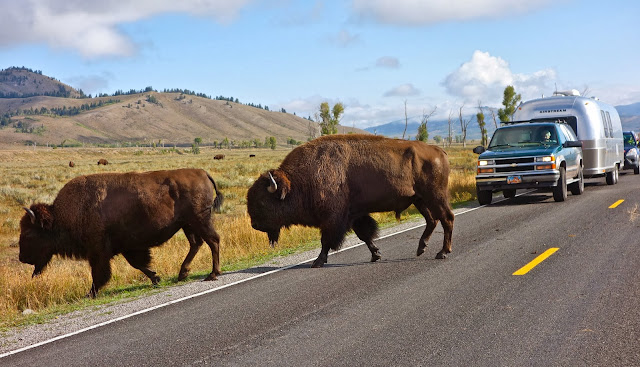 Reluctantly, I moved on for northern Idaho was my next appointed destination. I had not even dabbled in the wonders of this park. Charming towns politely scattered along the asphalt path threatened to further distract me from my goal. I am utterly smitten with the America West.

In Montana the rivers run north carrying anglers in floating vessels. Water flows up broad, long valleys with hills on either side which I expect the locals call mountains. In their modest manner they hold appeal. Very occasionally summits rise above timberline. 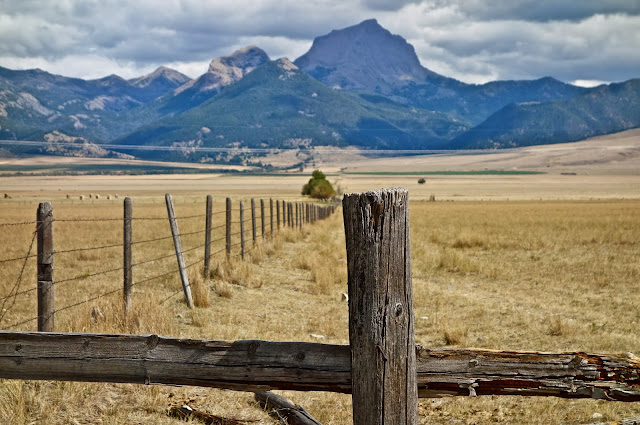 Rural Idaho is a country with clean shapes. Golden hay meadows, grey cylindrical grain elevators, and red potato trucks. All potato trucks are red, it seems, the shinny new ones and the old rickety ones. Altogether, I traveled through seven western states, 3,747 miles. It was harvest time and the road trip's defining thread was surprisingly not in the spectacular but rather the humble hay bales dotting the landscape along the entire loop as beads on a necklace.

Posted by Debra Van Winegarden at 6:12 PM No comments: