Essence: Barnroof Point is at the far end of a north trending cuesta spanning the Lightner Creek and Dry Fork drainages. While it lacks the drama of adjacent North Perins Peak and Perins Peak, compelling features include sandstone rim travel, a vibrant ponderosa woodland, reach-out-and-touch views of the La Plata Mountains from the vertiginous summit, and solitude. This half-day, early season hike is free of snow and mud even when loftier ranges in Southwest Colorado are buried. Barnroof is the highest of the three mountains immediately west of town and its winter closure period is the least restrictive.
Travel: From the US 160/550 intersection in Durango travel west on US 160 for 3.3 miles. Turn right on CR 207, Lightner Creek Road. Park in a large dirt lot at the Y intersection with CR 208 at 4.3 miles.
Distance and Elevation Gain: 5.0 miles; 1,800 feet of climbing
Total Time: 3:00 to 4:30
Difficulty: Trail, off-trail; navigation moderate; the abrupt cliff edge can be avoided; oak brush is thick in places so wear long pants.
Map: Durango West, Colorado 7.5' USGS Quad or Apogee Mapping
Latest Date Hiked: May 29, 2019
Winter Closure: The hike is within the Perins Peak State Wildlife Area managed by Colorado Parks and Wildlife. This trail and lands west of CR 208 are closed to public entry December 1 through April 15 to protect wintering big-game and spring-nesting peregrine falcons. Note that the closure on the east side of CR 208, including the Perins Peak duo, is extended through July 31. Posted: dogs must be on leash.
Quote: I believe that the process of attention is what makes you fall in love with the world. John Muir Laws

Hikers perch on the small viewing platform of Barnroof Point for an uncommon perspective on the La Plata Mountains. (Thomas Holt Ward, photo) 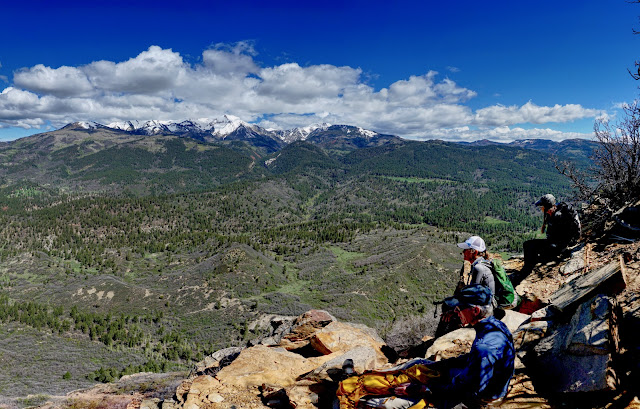 Route: Cross the Dry Fork of Lightner Creek and walk northwest while steadily gaining altitude all the way to Barnroof Point. Return as you came or descend off-trail on the south ridge. 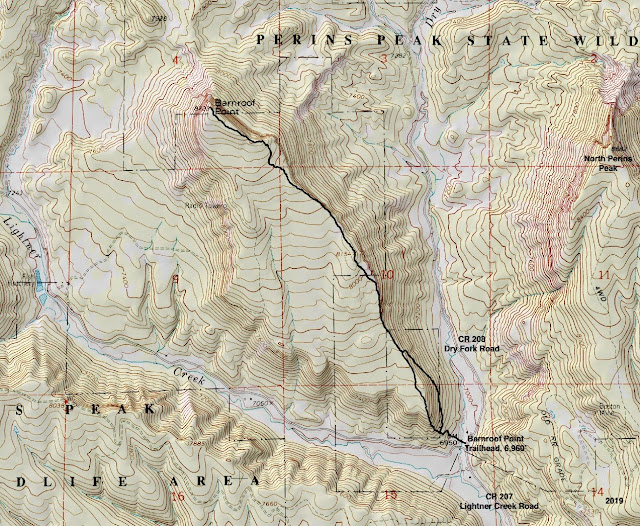 The trail leaves from the west side of the parking lot, elevation 6,960 feet, and immediately crosses the Dry Fork. Most likely it will live up to its name but in the spring of 2019, water was flowing. 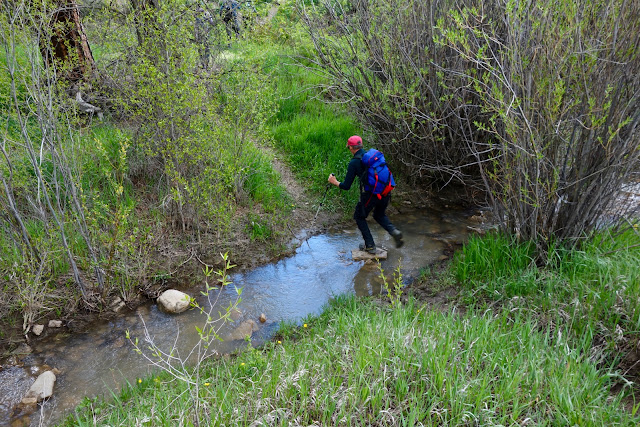 Pass the posted Colorado Parks and Wildlife boundary and then ascend an east-facing grassy slope that simply could not get any greener. This image depicts the south ridge return route. (THW, photo) 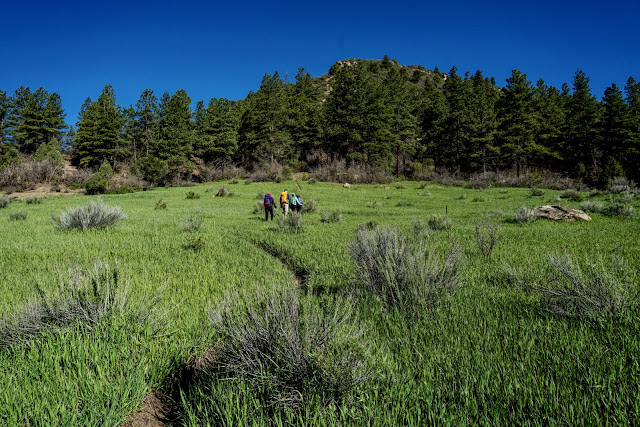 Climb steadily and somewhat steeply. A switchback links the footpath with an abandoned roadbed which makes a northerly rising traverse. The track is cut into Mancos Shale but traction is excellent thanks to shattered sandstone that eroded from the rim above. Some weathered blocks made it down the plunge intact. Gravity never sleeps. This image looks back on the bucolic Lightner Creek lowlands and Twin Buttes. (THW, photo) 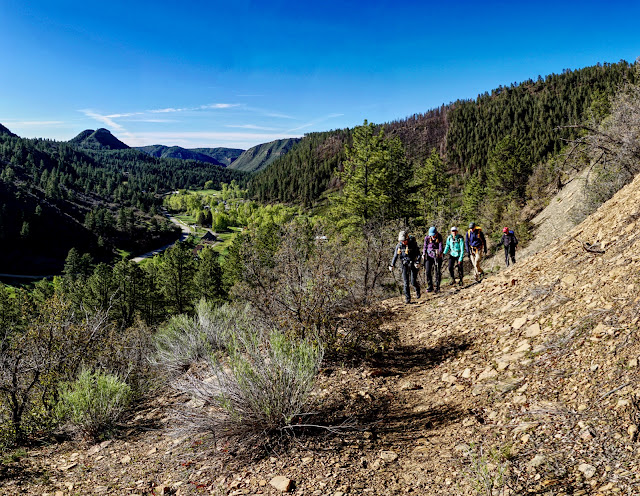 Ahead is the rimrock ringing the cuesta. Spring has been a long time coming and in late May the glossy leaves of scrub oak are just now beginning to appear. Most of the blooming plants are still sleeping. 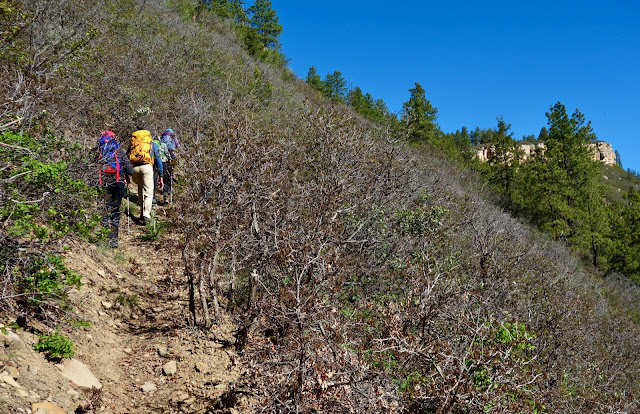 The engineered trail sputters out as it passes a band of rock at 0.6 mile. Hold the trajectory on a social trail that very soon turns sharply up the hillside. Footing is good enough when the soil is damp; embedded stones assist when the earth is dry. Trekking poles are helpful up the 80 foot pitch. 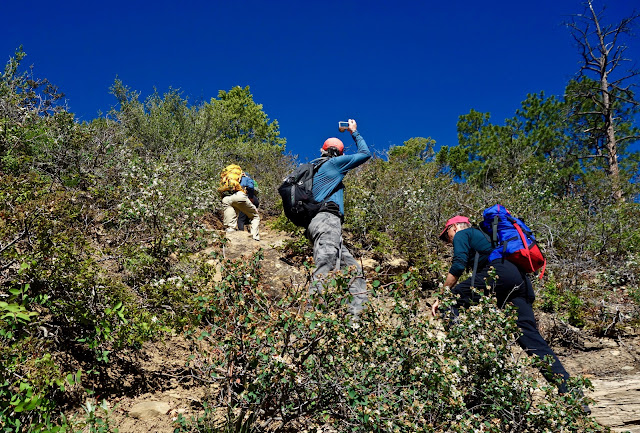 Arrive on the broad ridge at 0.7 mile, 7,640 feet. If the usual cairn is absent at this location make a mental or physical marker for yourself so you don't blow right by on the return.

The mountain is a classic cuesta, an asymmetrical ridge with an escarpment on three sides and a long and gentle backslope that conforms to the tilted beds of resistant sedimentary strata. Locate a wildcat trail and begin ascending through flourishing, aromatic ponderosa pines. (THW, photo) 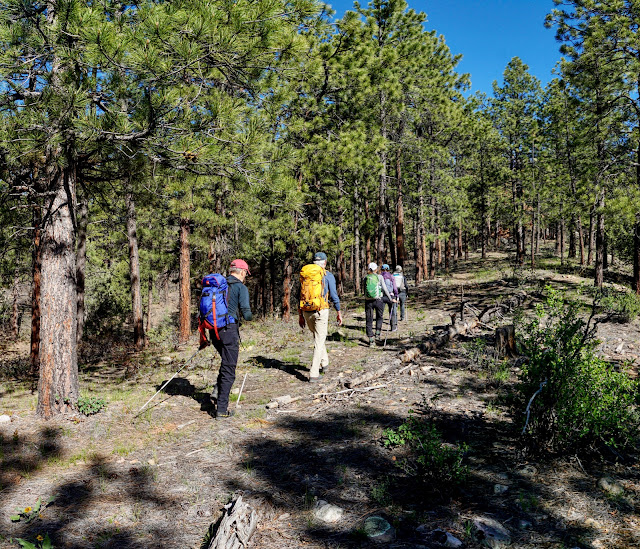 The social trail shies away from the precipice. We hiked freestyle hovering on the cliffrock, a linear platform relatively free of brush. The cuesta surface at this elevation is Point Lookout Sandstone named for the upthrusting prominent point near the entrance to Mesa Verde National Park. (THW, photo) 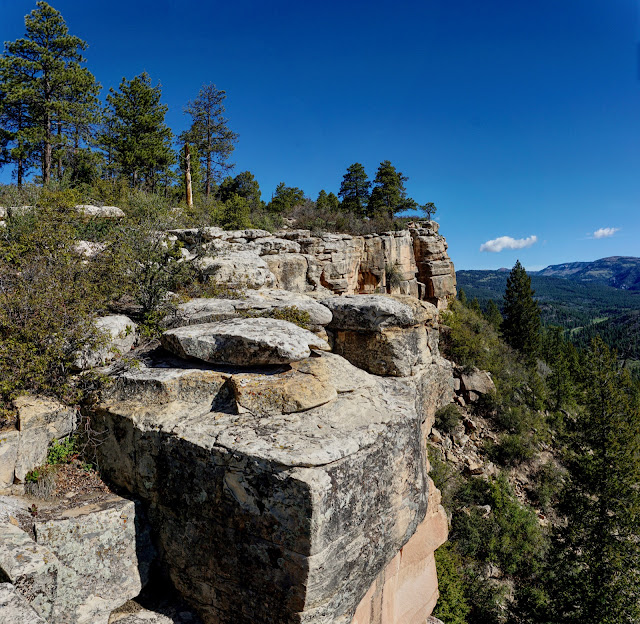 After crossing a dismantled barbed wire fenceline at 1.2 miles, follow the trail away from the rim and over Point 8,154'. On the north side a springtime patch of mule's ears precedes an expansive sandstone sheet reminiscent of Southern Utah and Grand Canyon's Esplanade. After copious rain the water pockets were brimful. (THW, photo) 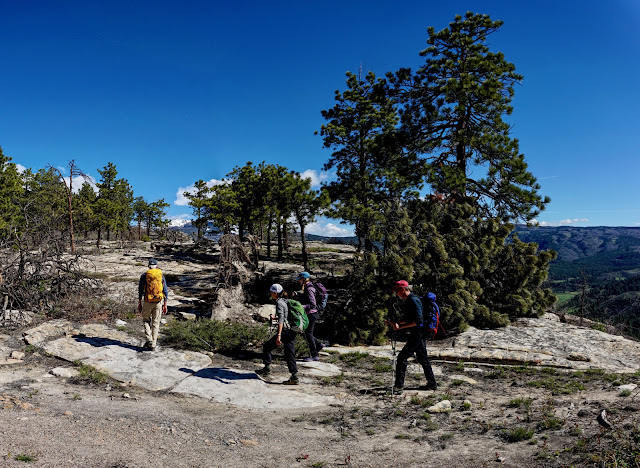 Gaining elevation, the coal-rich Menefee Formation, the middle layer in the Mesa Verde Group, overlies the sandstone sidewalk. The yellow hued blocks seen floating on the surface further up and comprising the summit are Cliffhouse Sandstone. Studying the image below, above it all sails a peregrine falcon. The peaks in the distance are Bald Knob and Lewis Mountain. 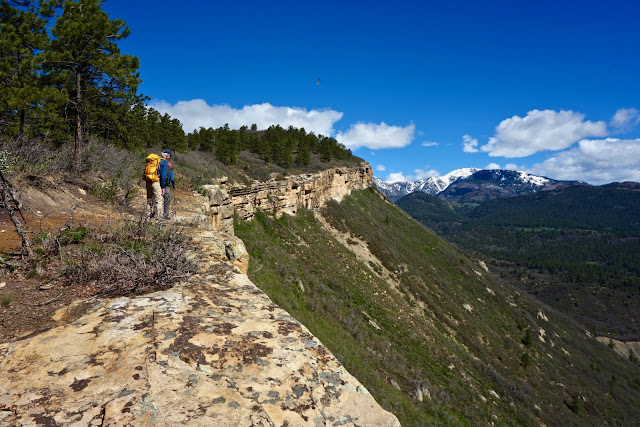 Looking over the Dry Fork bottomland a friend mused, "Where am I? This is so impossibly green. Is this really Durango?" Upon reaching Barnroof Point we will be looking due east over the top of North Perins Peak. 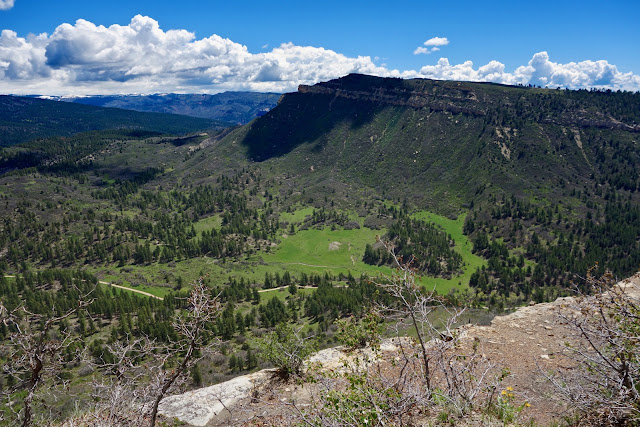 Perins Peak with its remarkably sheer east face has landmark status in Durango but it is a subtle lump from this western vantage point. 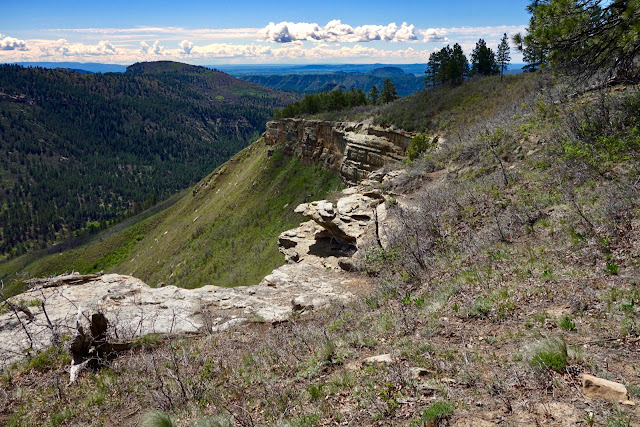 Leave the rim and climb a second roller at 2.2 miles, 8,600 feet. As you move into the interior weave through the scrub oak and snowberry on game trails. While Barnroof has a maligned reputation for being a brushy affair, much of this can be avoided with careful route selection. Still, you will be grateful for long pants.

The ridge narrows and a view opens to the west for the first time. Closing in on the northern terminus of the mountain boulders reside on the ridgecrest in a linear jumble. There are three caves, maybe more, possibly a neighborhood of bear dens. Here beasts may slumber under the watch of old growth ponderosa. In addition, plentiful elk scat was found on the upper mountain. (THW, photo) 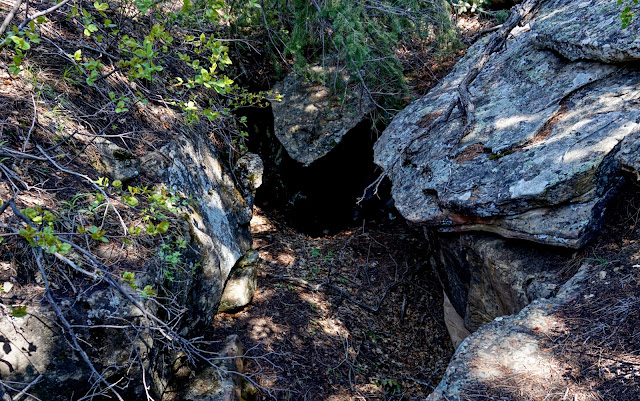 Don't get your speed up. The summit comes unexpectedly and culminates in a serious drop at 2.5 miles. There's not a lot of room and the Cliffhouse boulders are assembled rather precariously. The peak register was placed by local, legendary climber Mark Ott in October, 2016. 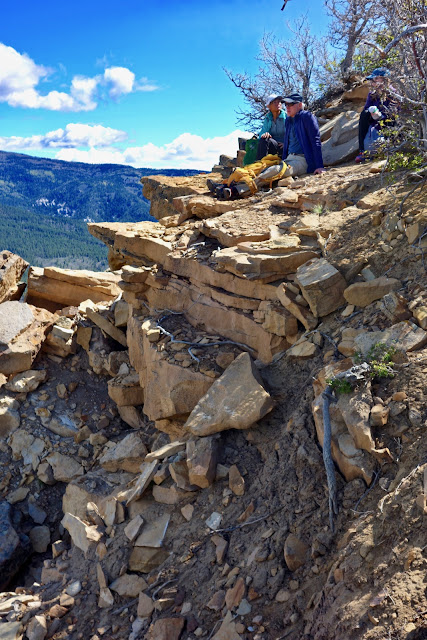 The La Plata Mountains, Durango's backyard range, are only a few miles distant in the west. The peregrine we saw gliding and calling over the summit could dart over in moments. The centerpiece in the east block is, of course, Silver Mountain. 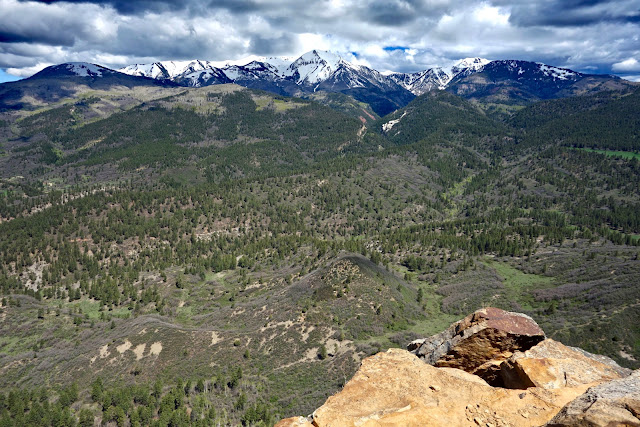 Most hikers are advised to retrace their steps on the standard route to the trailhead. If you would like more adventure remain on the backslope. 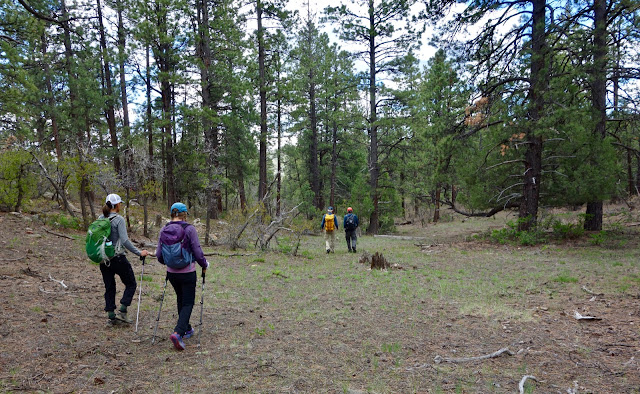 The ridge narrows 0.3 mile past the standard bailout at the southernmost point of the cuesta. Look around for the safest drop through the cliff band. Your line need not exceed Class 2+. 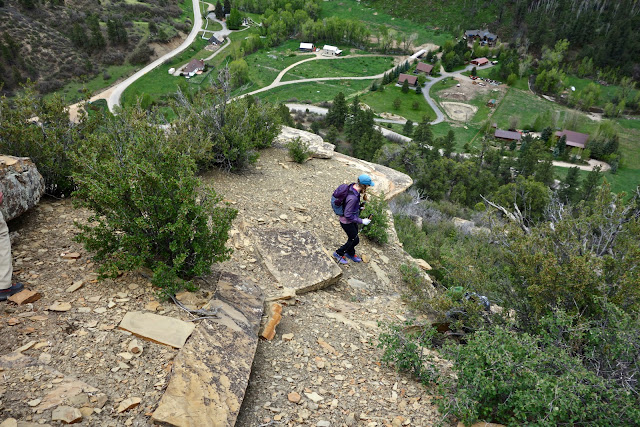 A carabiner was left attached on this overhung cliffrock. We noticed pairs of steel anchors drilled into Point Lookout Sandstone at various locations. (THW, photo) 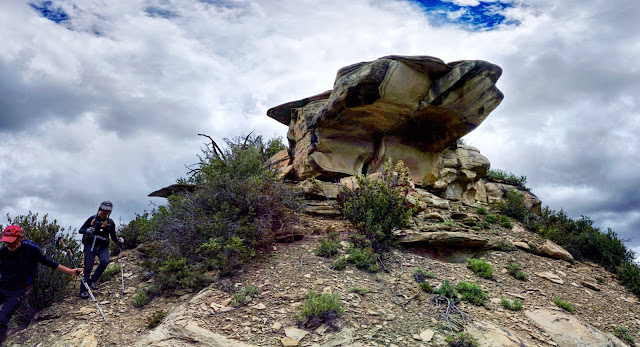 Plow steeply down the south ridge and intersect the upcoming footpath just above the verdant hillside. (THW, photo) 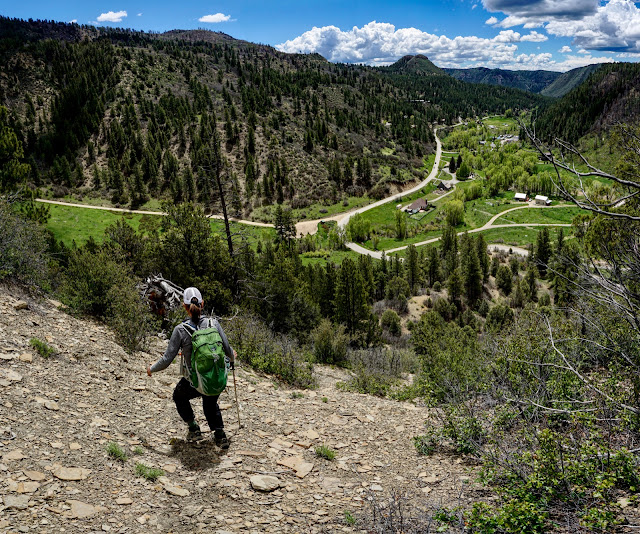 Signs of ancient visitation remain on the mountain. On a rock art panel, five turns of a red spiral culminate in the head of a venomous snake. Standing to its side are five linked anthropomorphs. A student of archaeology speculated the pictograph figures are at least 1,000 years old. Later tribes added a string of elongated human figures and likely pecked over the paint, creating contrast in the patina. We felt a bond with those who came to honor this very place over the centuries, imbuing the hike with timelessness. If you happen upon the rock art, please be respectful. (THW, photo) 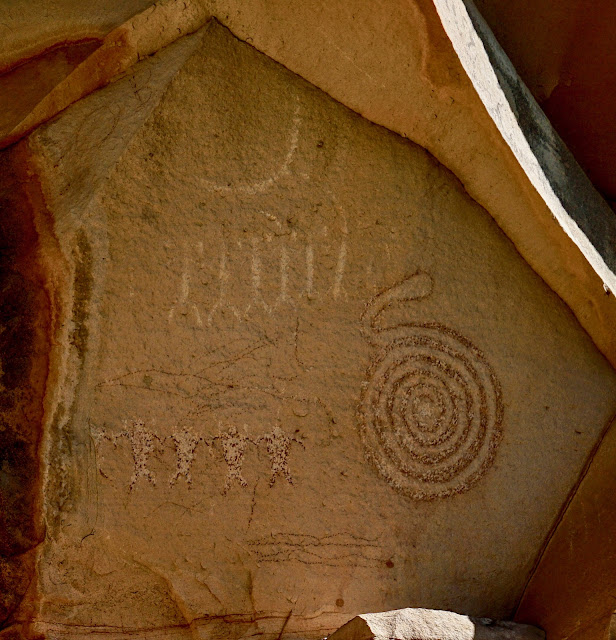 This image was captured from the trail coming out of Deep Creek on a June evening in 2019. The footpath crosses over a low pass at the north base of Barnroof Point. (THW, photo) 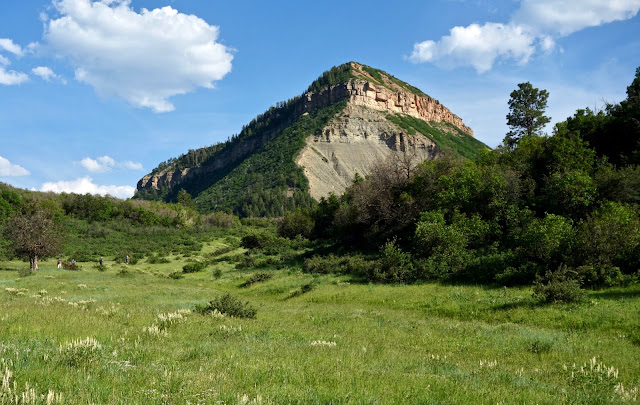 Posted by Debra Van Winegarden at 8:42 PM No comments: