The day the United States Government Shutdown, my companion and I were driving to Zion National Park to meet three other couples. Disappointingly, but understandably, they chose to stay home.  We did a quick plan adjustment and headed for open country.

Heading south from Hwy 89 on House Rock Valley Road, the Wire Pass parking lot was surprisingly stuffed with vehicles. We took up residence in the mostly deserted, technically closed, Stateline Campground where we slept on the ground, the sky shot with stars, crystalline down to earthline where they were swallowed by planetary darkness.

It is irritatingly improbable to score a permit for North Coyote Buttes, site of The Wave. The ranger at the trailhead on day two of the Shutdown gave us the nod by saying he wasn't enforcing. So away we giddily walked. 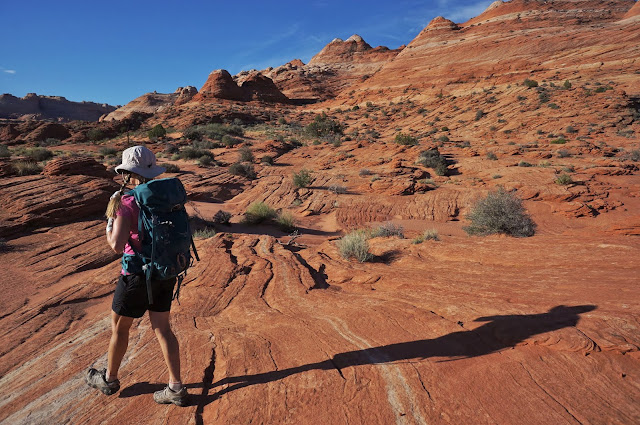 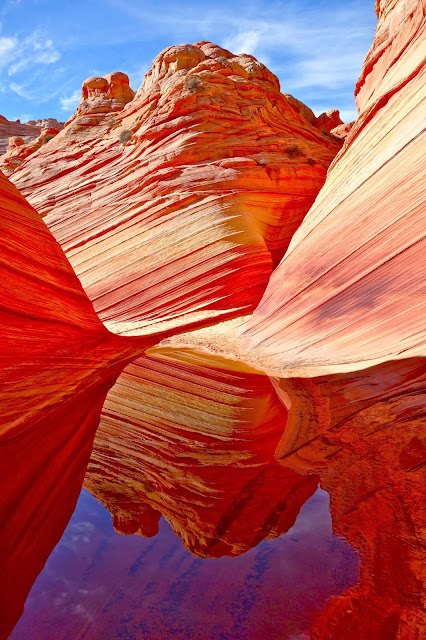 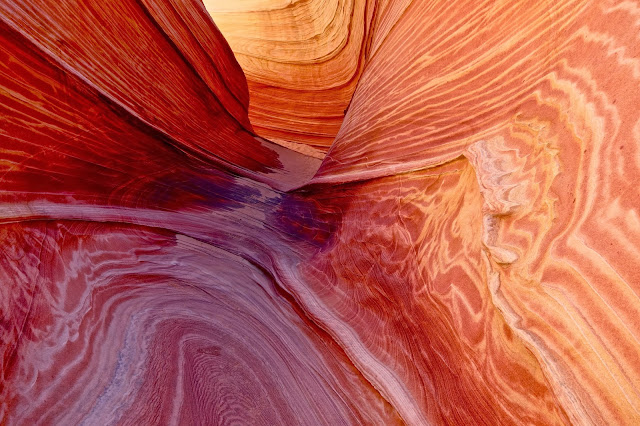 Ten foot circle of chaos held firm by Stripe World Order. Voices inside rocks are not silent; they mirror a similar place inside of me. 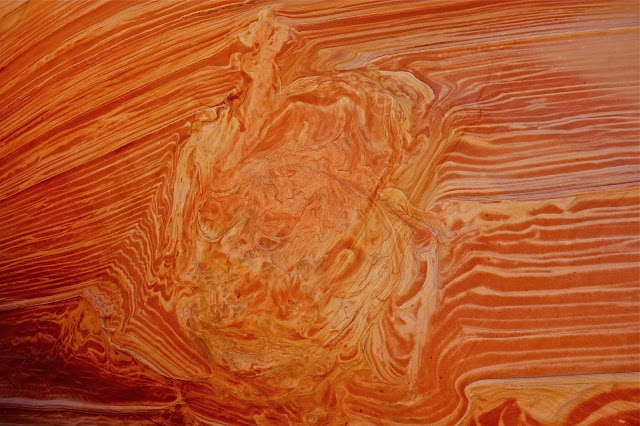 Twenty foot section of bedrock that doesn't know what to make of itself; still, this is relationship perfected. 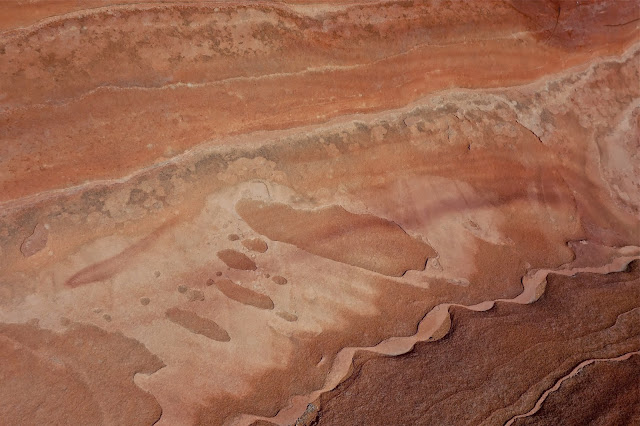 As it happens, it is a good thing we were exactly there on that day for upon our return, we caught up with a Chinese couple in their mid-80's from New York City. They were very much lost and weak from exhaustion having been hiking for seven hours. We escorted them home.

Our second day met with initial disappointment as the road to the Middle Route into Buckskin and Cobra Arch was washed out. So we attempted to find Starlight Arch. My friend later wrote, From our parking area a break in the Vermillion Cliffs was visible to the north about two miles away, so we headed for that. We followed a side drainage of the creek to a steep, narrow gully coming down from the cliff proper through the Chinle Formation. Numerous small obstacles were all passable to the cliff base where a clear view of the break was available. Not possible! 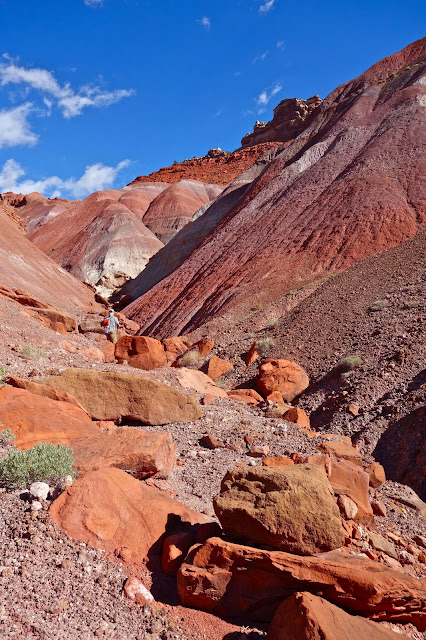 A dry river flows at the base of Vermillion Cliffs. Mollie's Nipple is in the distance. 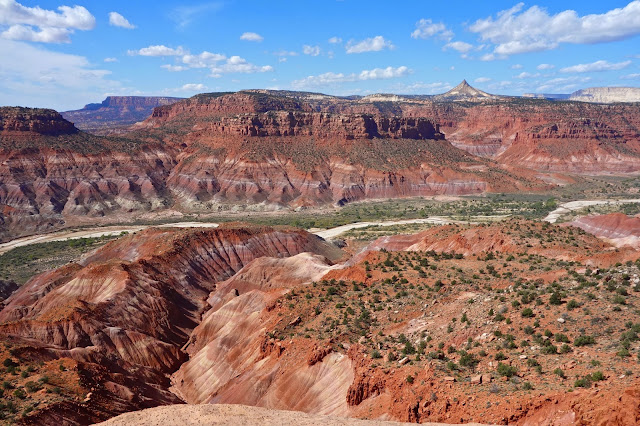 To the right, however, the cliff was somewhat broken and offered possibilities. Pursuing these, a narrow scrambling route was eventually discovered, including a delightful 'crack in the wall,' and an exposed final leg-up to a narrow micro-ridge and onto safe ground. Exploring south from this point, we found large, beautiful wind-eroded formations of white Navajo Sandstone, but no arch! After lunch at our southernmost excursion along the cliff top, we decided to retreat as we had come, in spite of clear route-finding challenges...In the end, although the hike turned out to be one from the non-existent to the undiscoverable, we happily christened ourselves 'Vermillionaires' for our unique penetration of the cliffs.

Impassible pouroff in the break, our scramble and squeeze route center. Opportunity created by obstacle, uncharted route finding holds the possibility and promise of everything we cannot yet see. 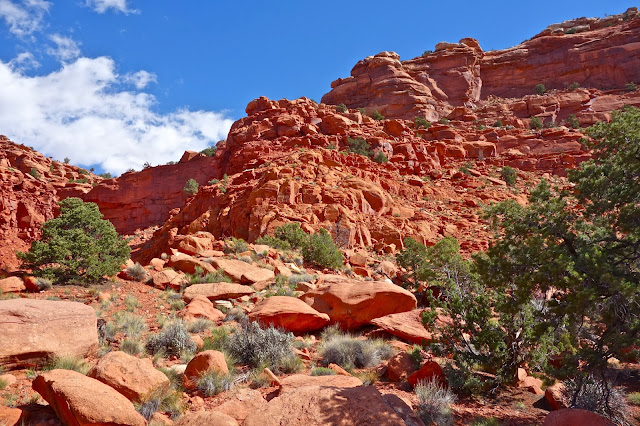 Page, AZ was simply over-flowing with international tourists ousted from our National Parks. I found myself apologizing multiple times to disappointed French, German, and Chinese travelers. Town was literally jammed with tour buses. We half expected to see a bus parked at Waterholes Canyon a few miles south of Page. The upper portion of this slot is nearly as spectacular as renowned Antelope, without the fees and hoards. We spent an additional two hours dangling off precipices in our attempt to penetrate the deeper, lower canyon but it is hopeless without ropes.

The interior of everything that matters glows. 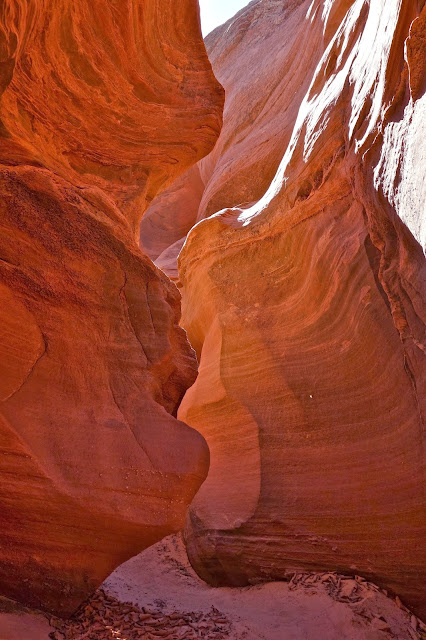 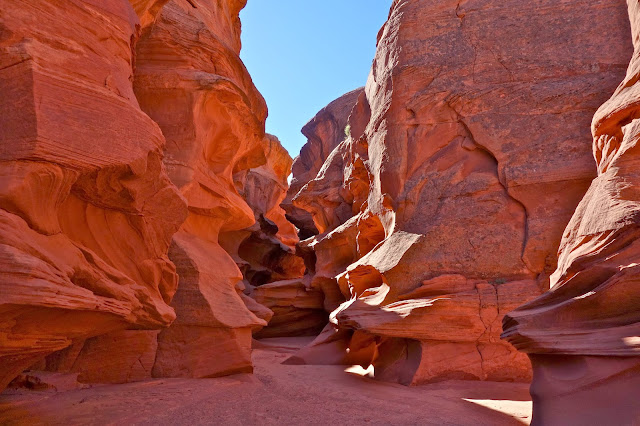 The road was so trenched and treacherous to the Page Hoodoos, we walked in solitude. Stone columns happily hoist their partners as a human provides scale. 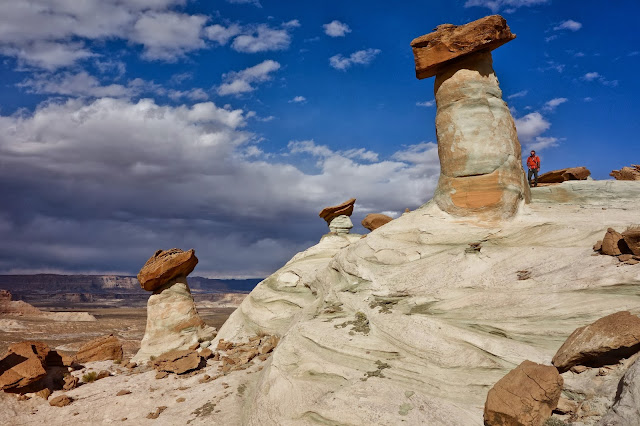 I am drawn to the tallest tower of castle ramparts above the hoodoos. Lake Powell and Navajo Mountain are in the distance (THW). 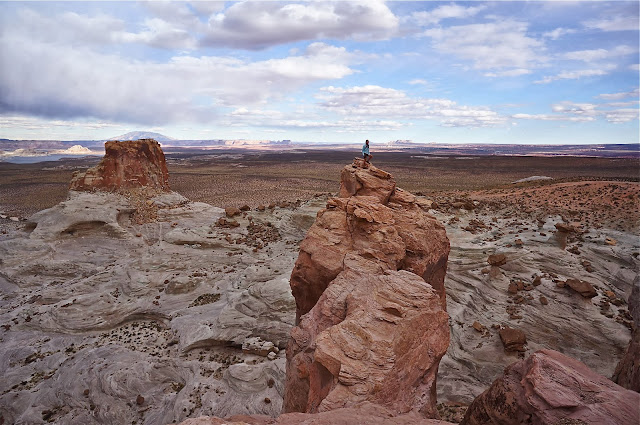 We bored our way out through deep sand to Paw Hole in South Coyote Buttes; walked past this complicated, cross-bedded stone edifice; admired the filigree inside the alcove, and in time, found "Finland". 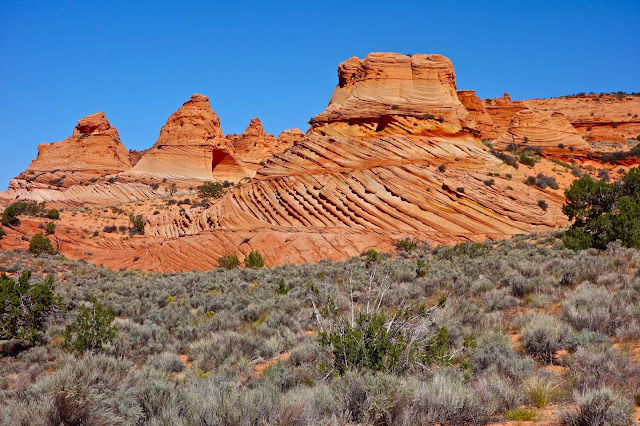 If I could discern this stone's story of origin, I should ask how it came to live in the three dimensions pictured. Alas, it'd require a PhD in geology to understand how rock dares to structure itself as it does in Finland. 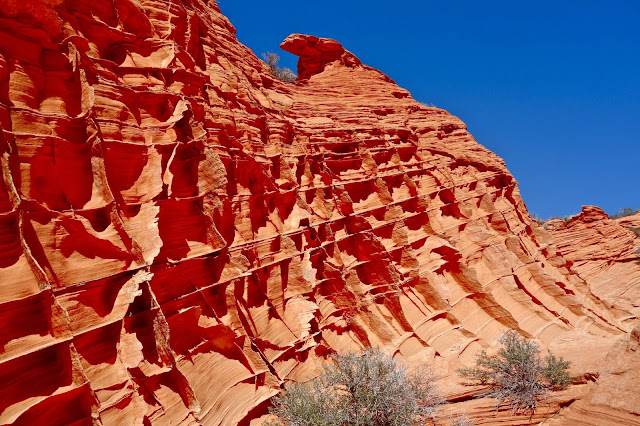 Do not enter on a klutzy day. Careful placement of feet is required at all times, even when you are laughing along with these guys, more bizarre than creatures in my dreams (THW). 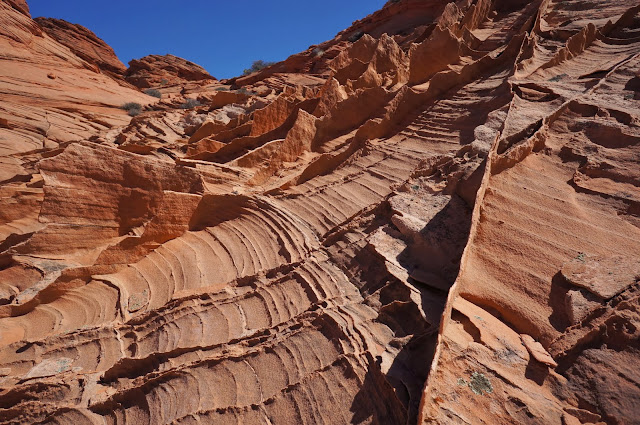 Sheets of sandstone were a half inch thick. Interior bonds are strong but on the outside the rock is as fragile and delicate as a wafer. 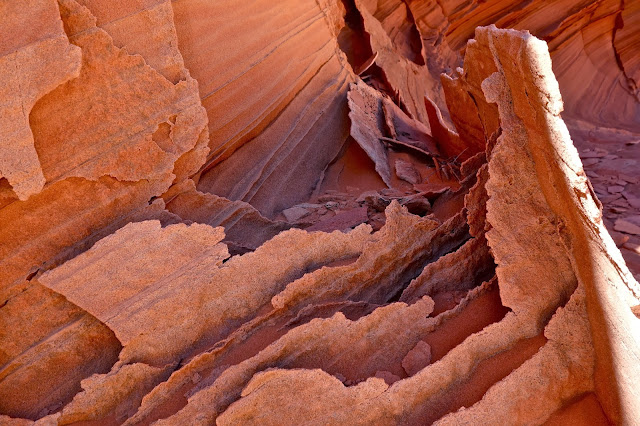 The jig was up on the sixth day of the Shutdown. Hoping to walk in the non-permitted upper section of Buckskin Gulch, a ranger ordered us off our very own public land. We drove home, but not before making a hearty run at it, even capitalizing on this utterly ridiculous, perilous, and heartbreaking Shutdown situation.

Posted by Debra Van Winegarden at 1:59 PM No comments: