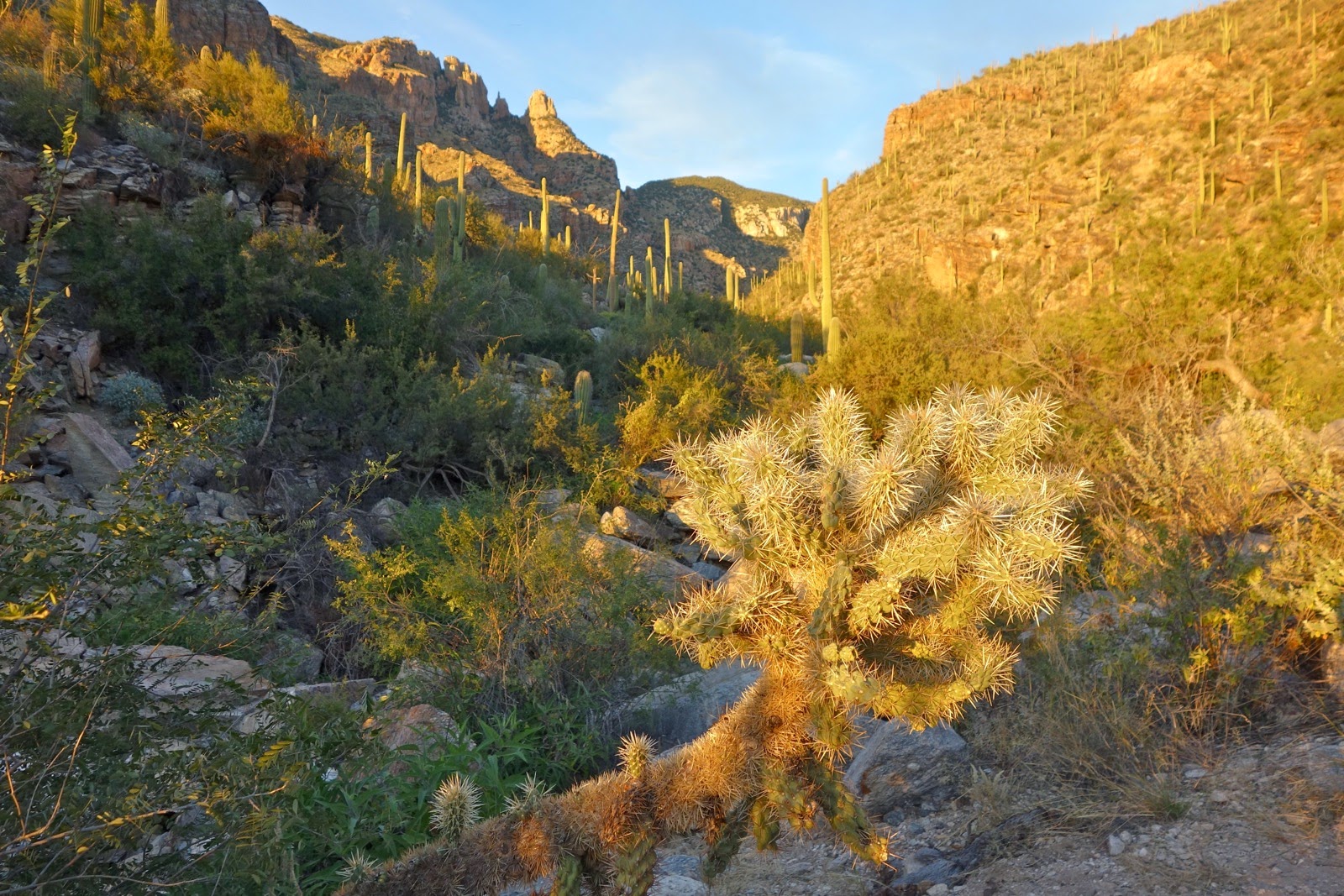 Route: Hike 2.8 miles on the Finger Rock Trail to Linda Vista, 5,240 feet. Take a social trail steeply down to Finger Rock Canyon and then up to Saddle 5,980', northeast of Finger Rock Guard. Follow a cairn'd scramble to the summit. 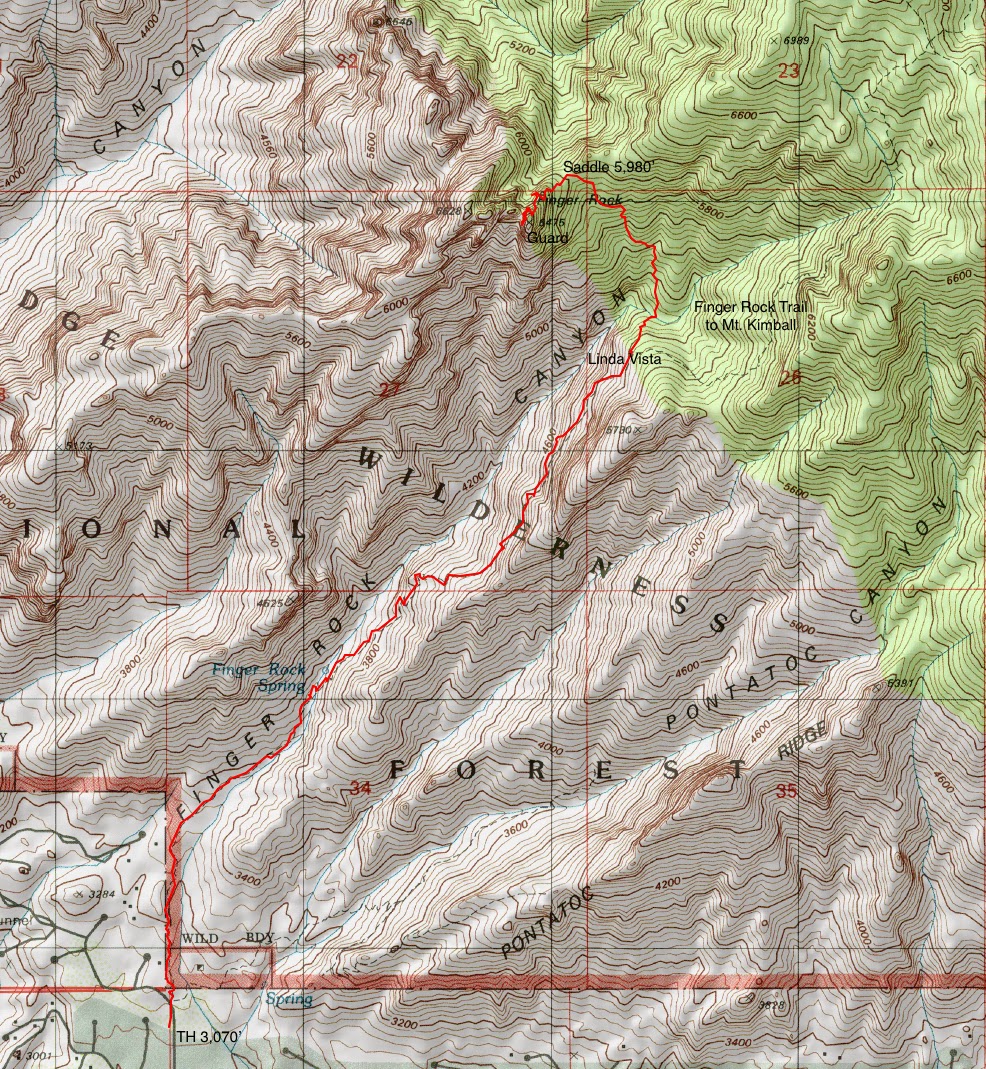 From Trailhead 3,070', at 0.1 mile the Pontatoc Trail branches off to the right. Stay on Trail #42. The trail is well known, in part because it provides the quickest access to Mount Kimball, 7,258'.  It is a somewhat challenging treadway embedded with boulders ranging from bowling ball size on up. Expect to wind around and climb over stones with a fair share of 18 inch step-ups. Stretches of dirt offer reprieve. 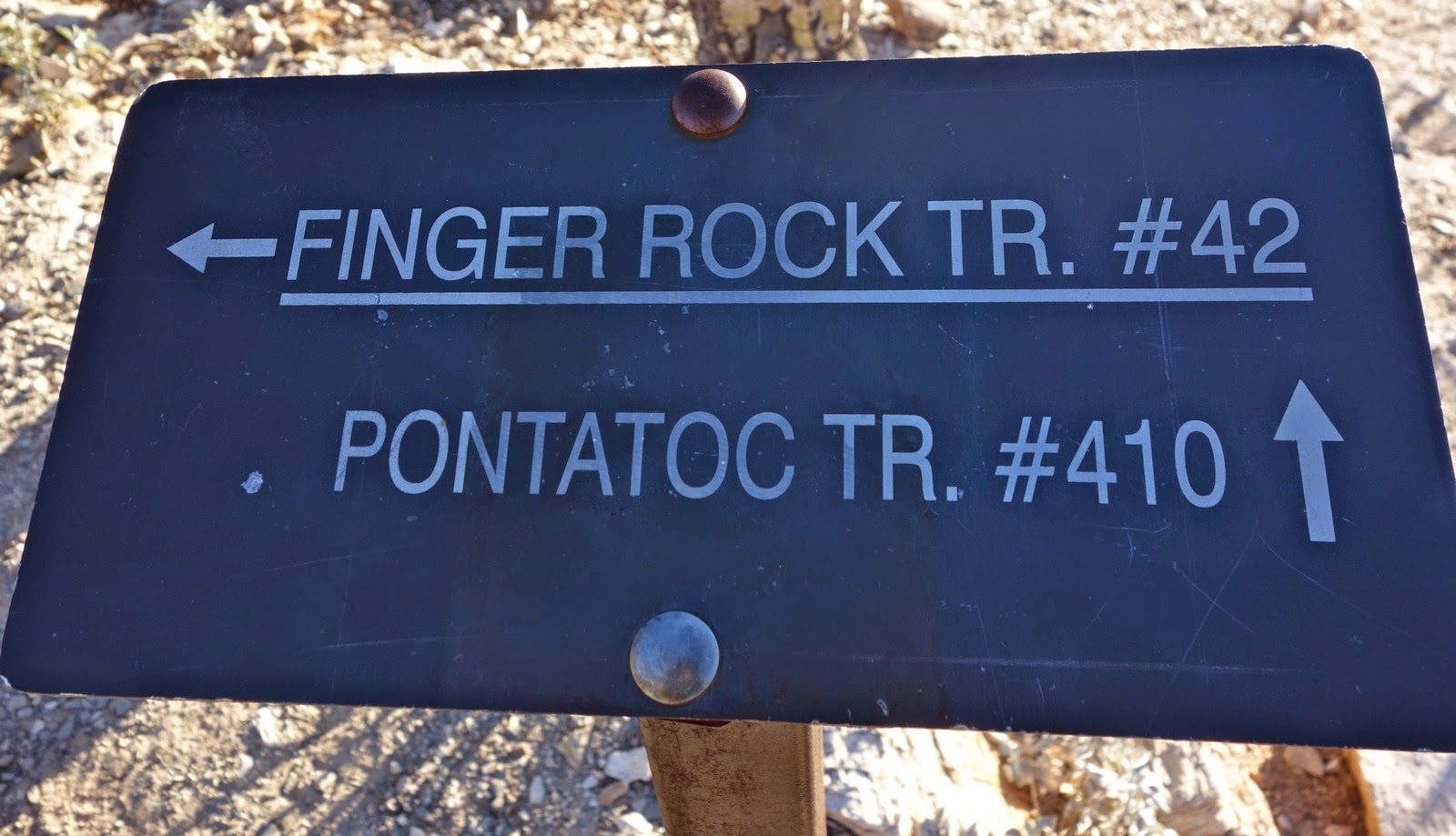 In the lower canyon the throngs of saguaro are so magnificent you'll think you are in the national park. Keeping company are ocotillo spikes, prickly pear, brittlebush, staghorn cholla and, in the spring, Mexican gold poppy. At skyline in this image is The Tombstone, Prominent Point (Pt. 6,628'), Finger Rock, and The Guard. 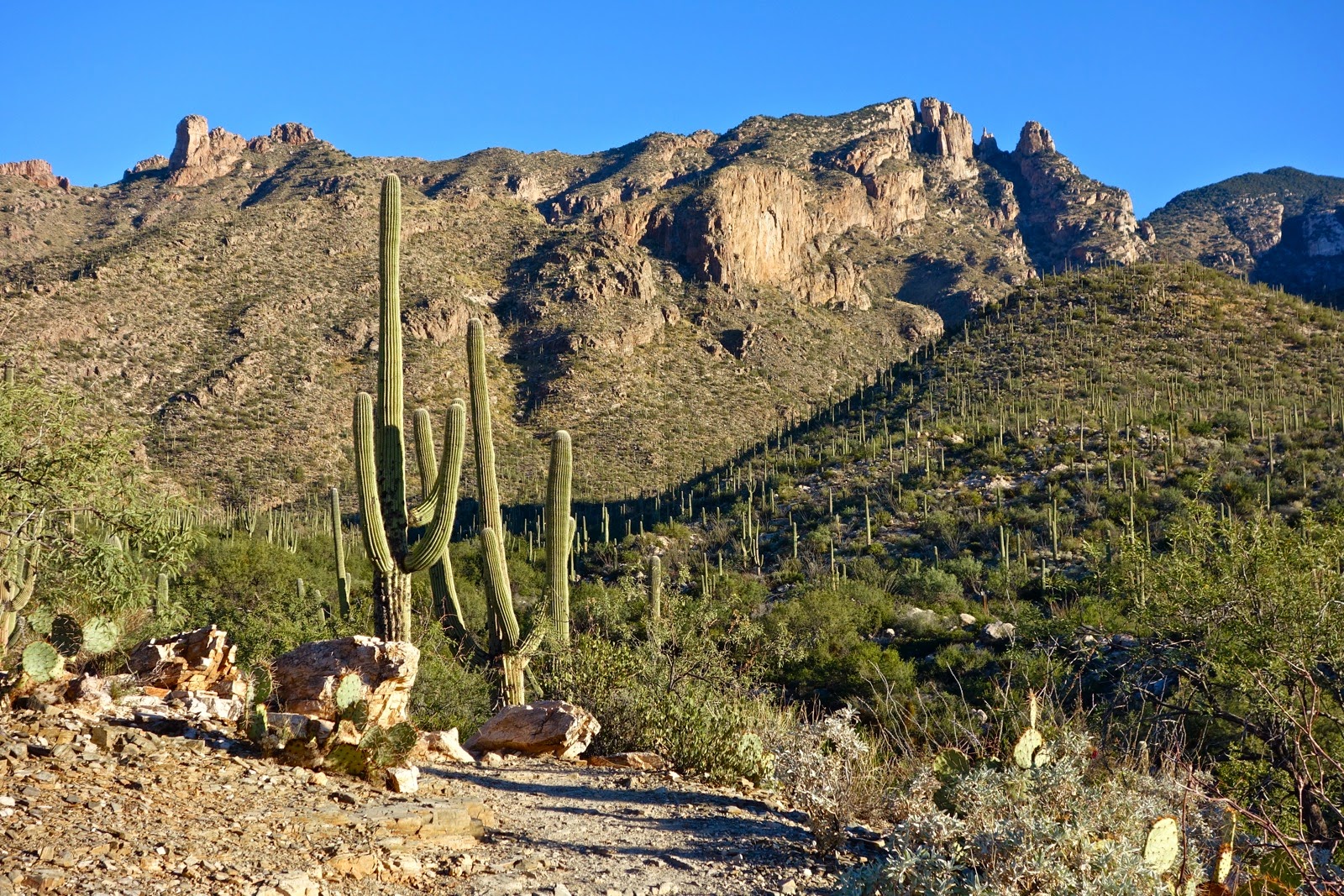 Cross the draw at 0.9 mile and then pass Finger Rock Spring. The climb starts in earnest at 1.2 miles. The trail launches onto a rising, northeast traverse, staying well above the canyon bottom on its southeast side. While clinging comfortably to the edgy hillside, the middle path threads between cliffs above and below. This is the most open of Santa Catalina Mountains' major front range corridors with ever-expanding views. 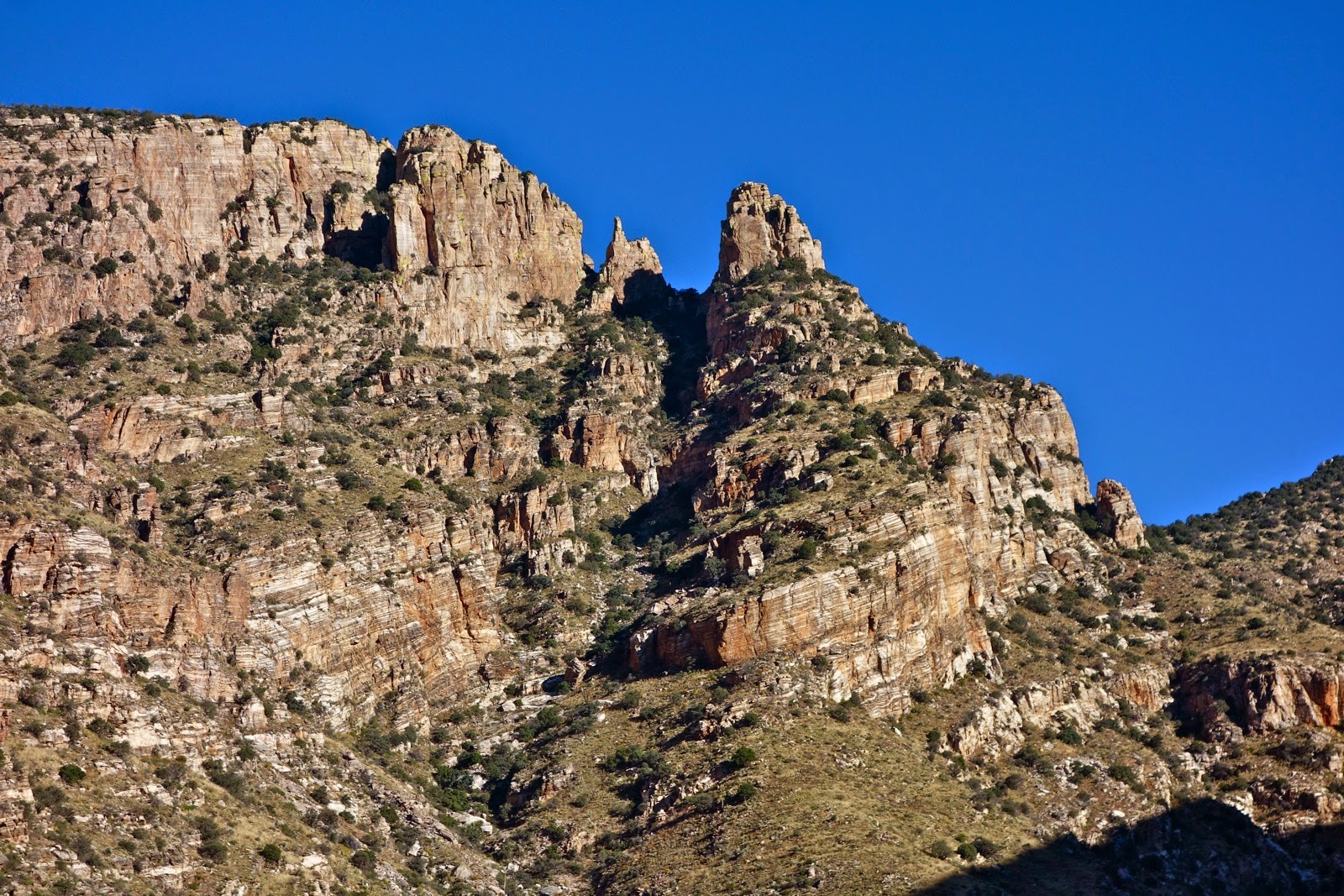 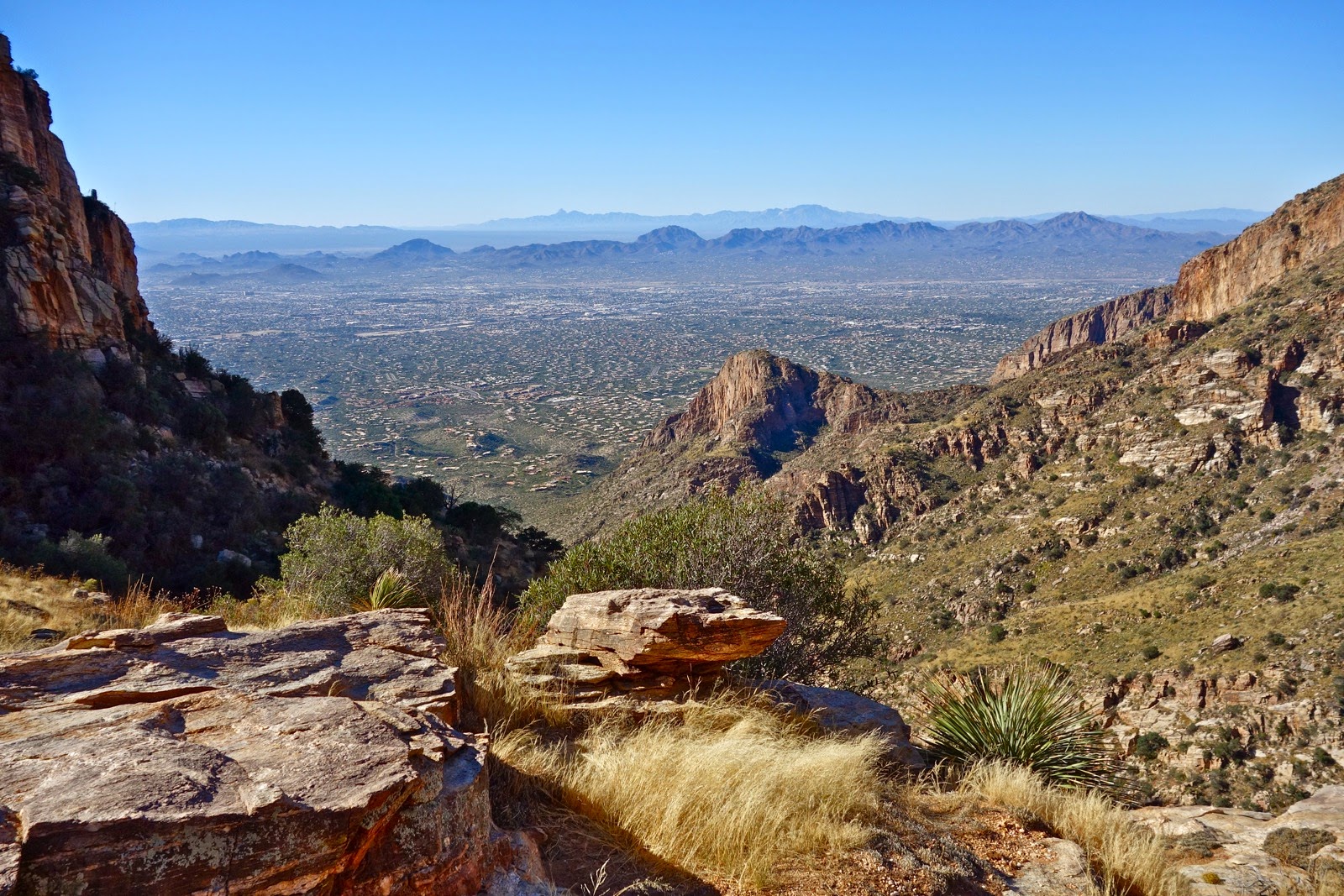 Linda Vista is where our route diverges from the on-going Finger Rock Trail so take a moment to get oriented. The trail to Mt Kimball is marked with a cairn; it heads east and bends around Pt. 5,730'. The Guard course uses an unmarked, thin track heading north. The image below was taken from Linda Vista and shows our next objective, Saddle 5,980', right of The Guard. 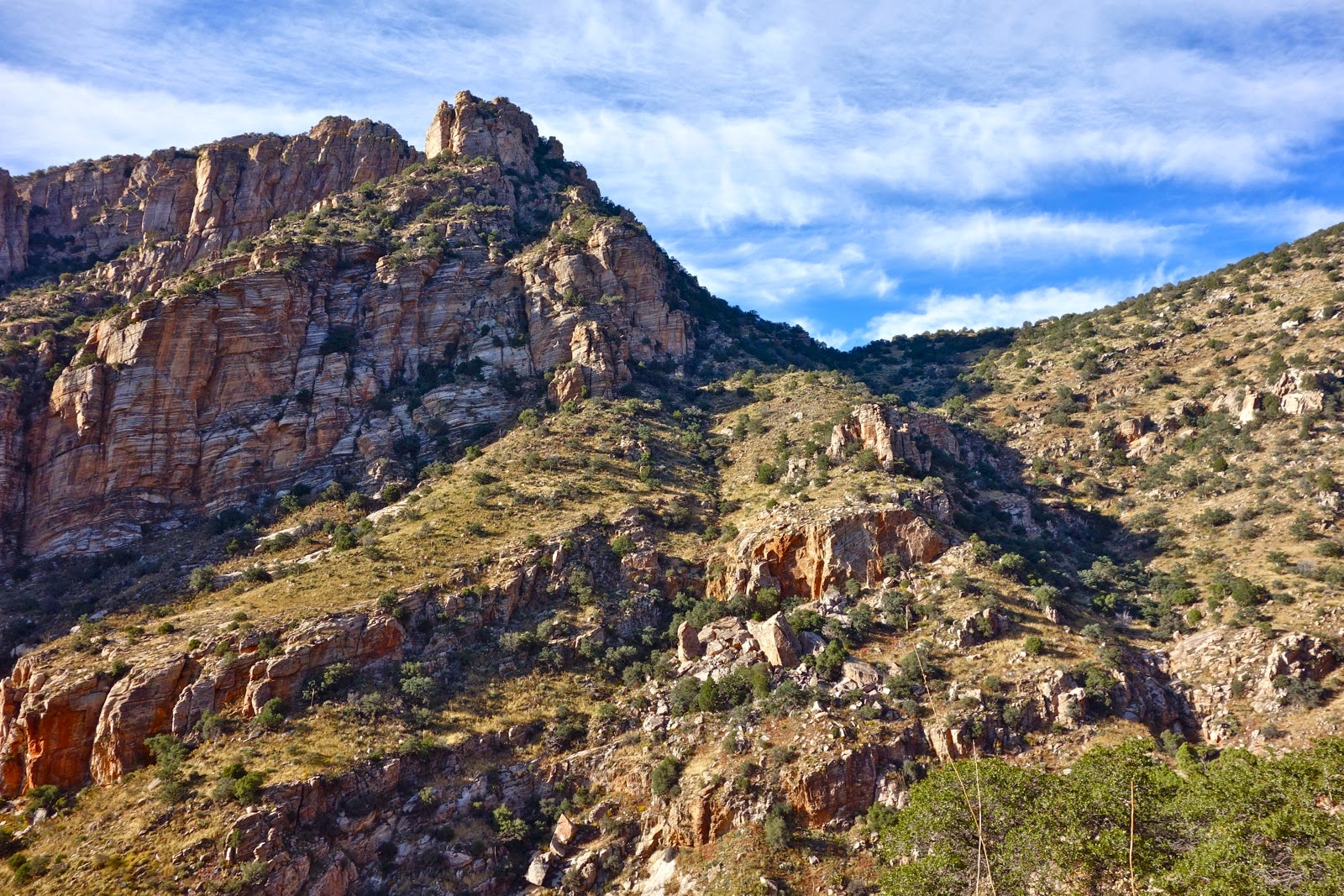 Plunge down a well-trampled, steep social trail losing 150 feet in less than 0.2 mile to the bottom of Finger Rock Canyon. Cross the usually dry wash on Santa Catalina Gneiss with veins of white quartz. Don't count on gathering water. 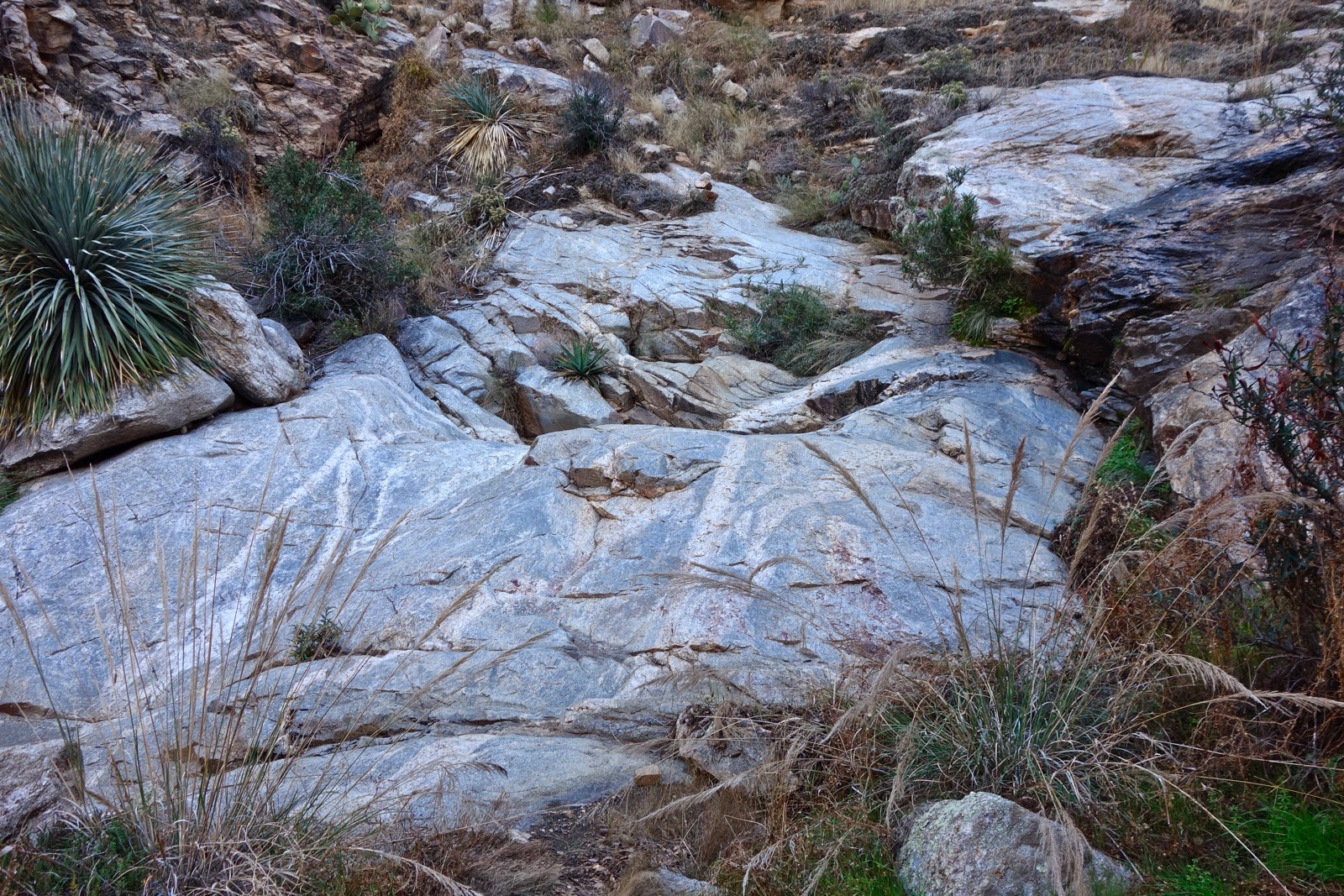 The use trail to the saddle is distinct, direct, and periodically steep. It presents nothing more and nothing less than necessary to get the job done. Sotol and beargrass dot the plantscape. This image looks back on Linda Vista, the narrow bench at the base of Pt 5,730'. 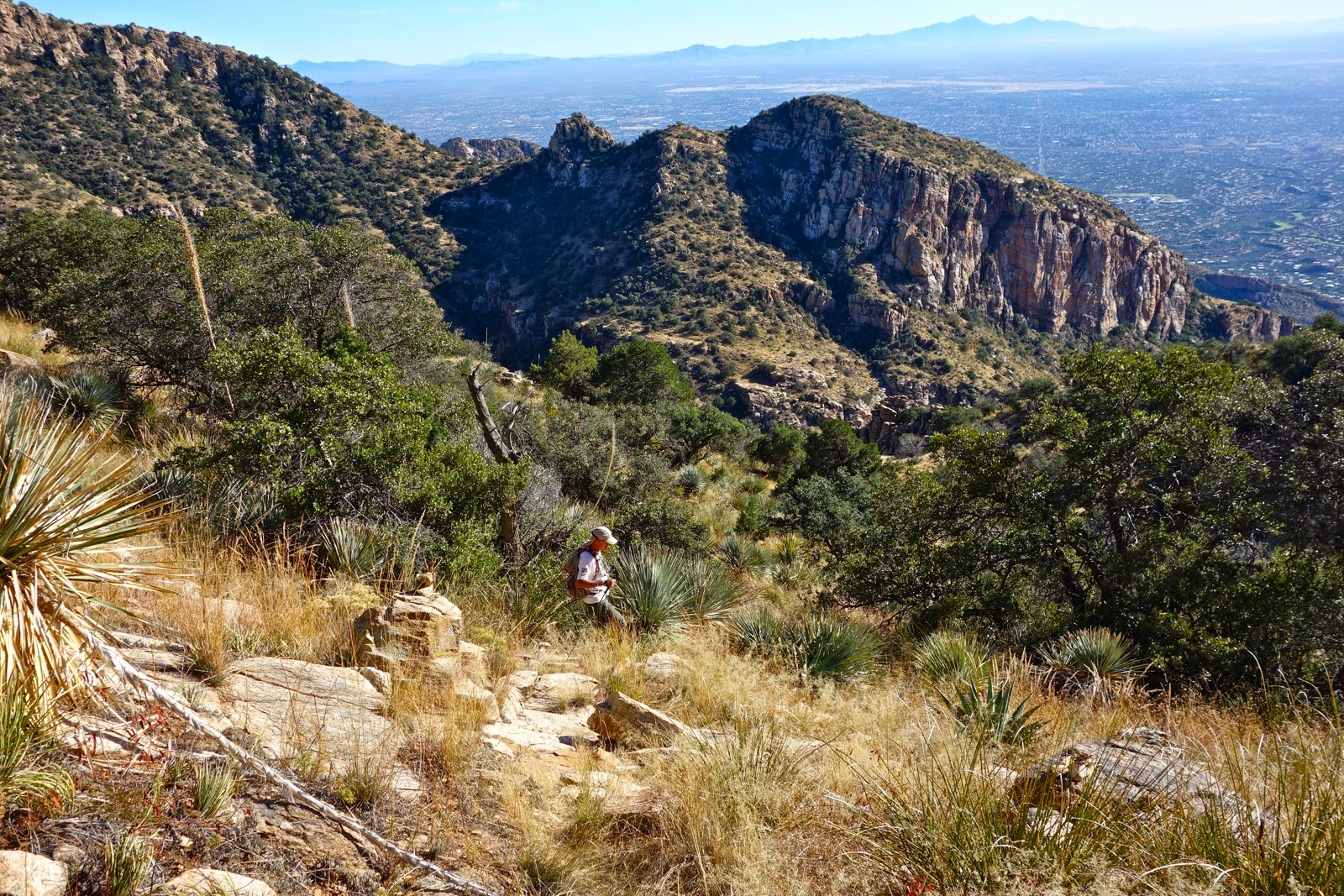 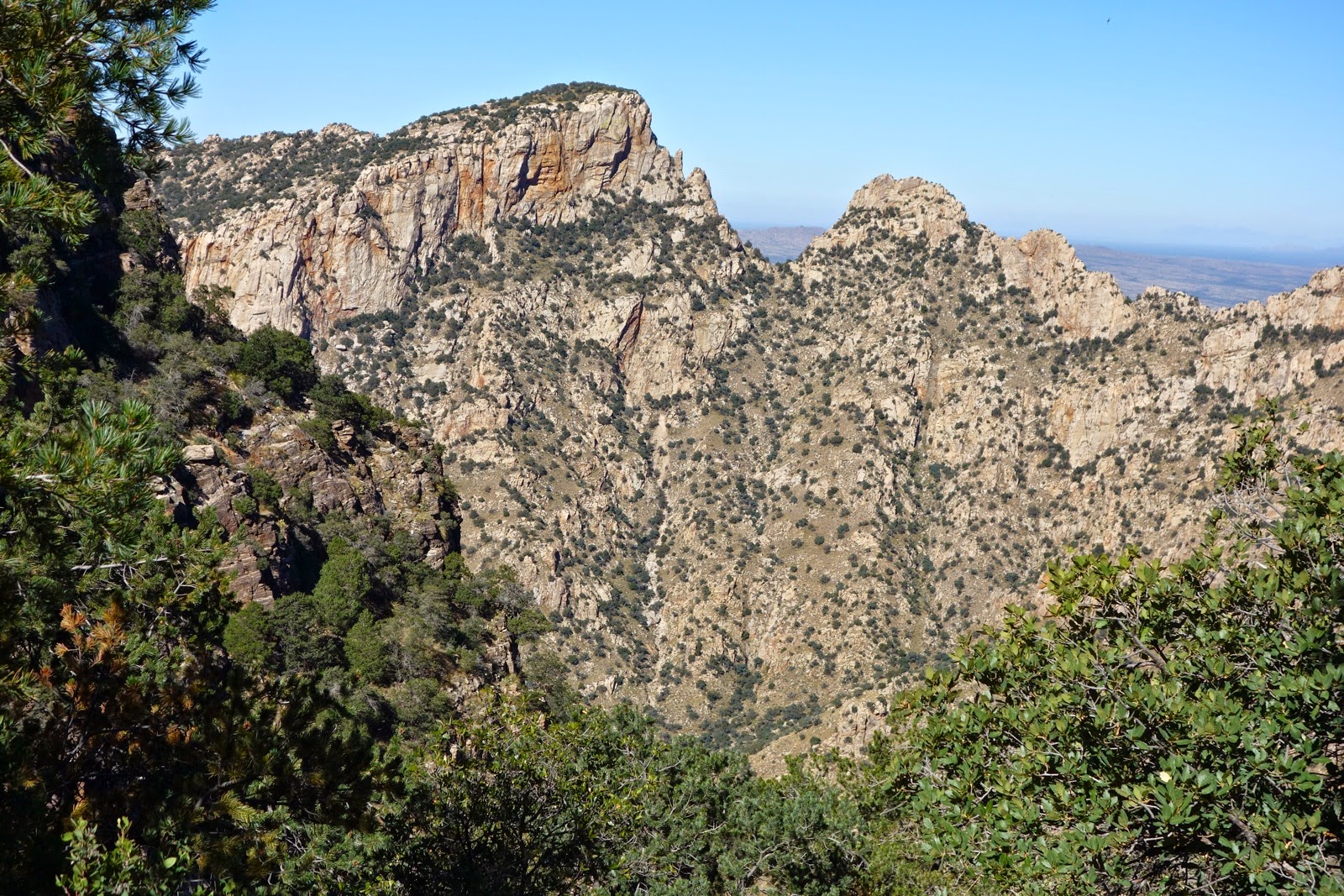 It is 0.4 mile from the saddle to The Guard; roundtrip takes an hour. Look for a faint path heading southwest, aiming right at the crag. The cairned route is up the northeast side. Pay careful attention to these little rock piles for the passage is convoluted as it wends its way up through a congregation of pinnacles. It's going to feel playful, unlikely, embracing and almost secretive. When can you so easily scramble up a 500 foot, all-tower prominence? If the exposure is bracing, back up and find the correct route. 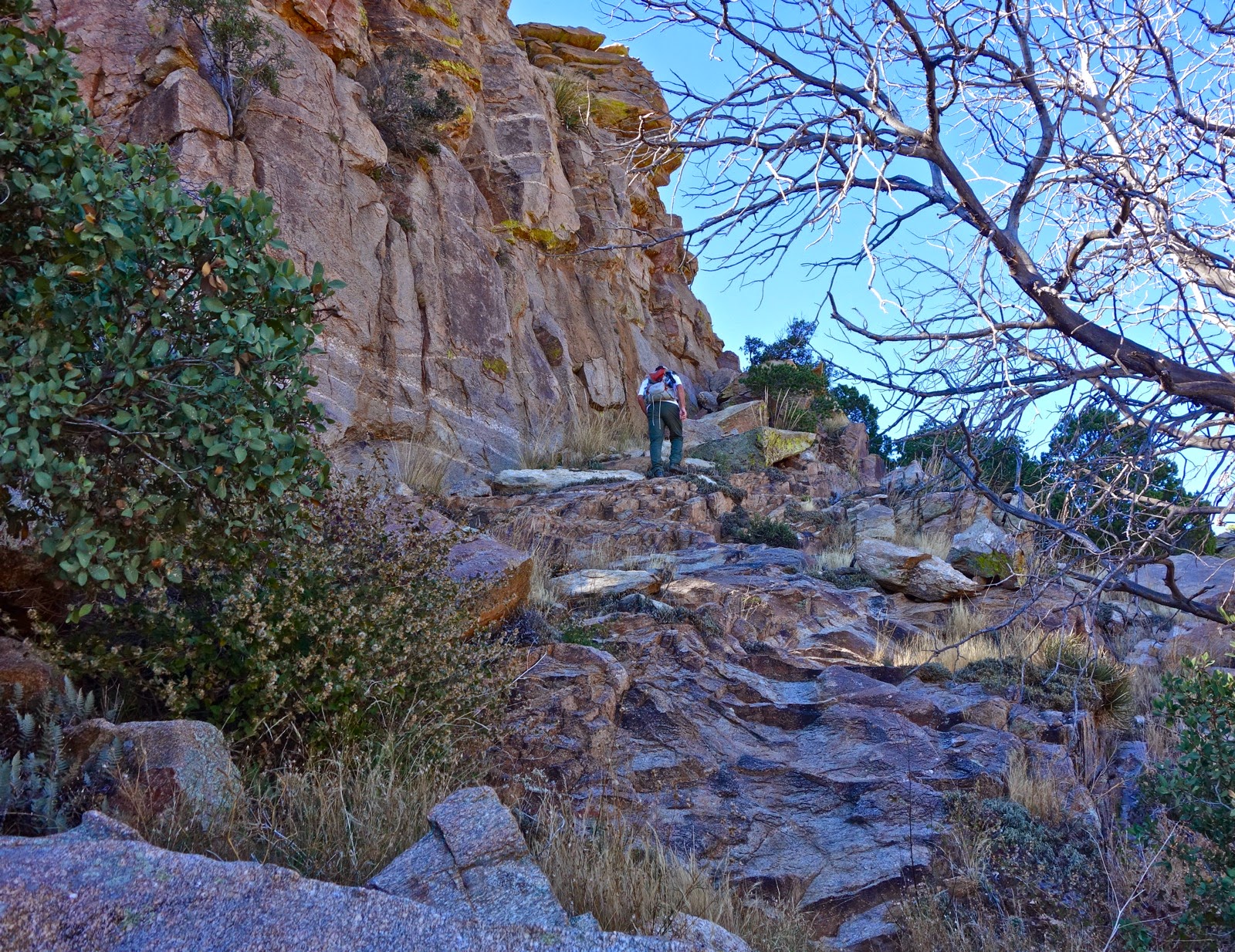 You will come to a 15 foot wall with two routes. As you face the wall, the left has better holds and is more protected. Squeeze between rocks and trees, scramble up short pitches. It is enchanting. 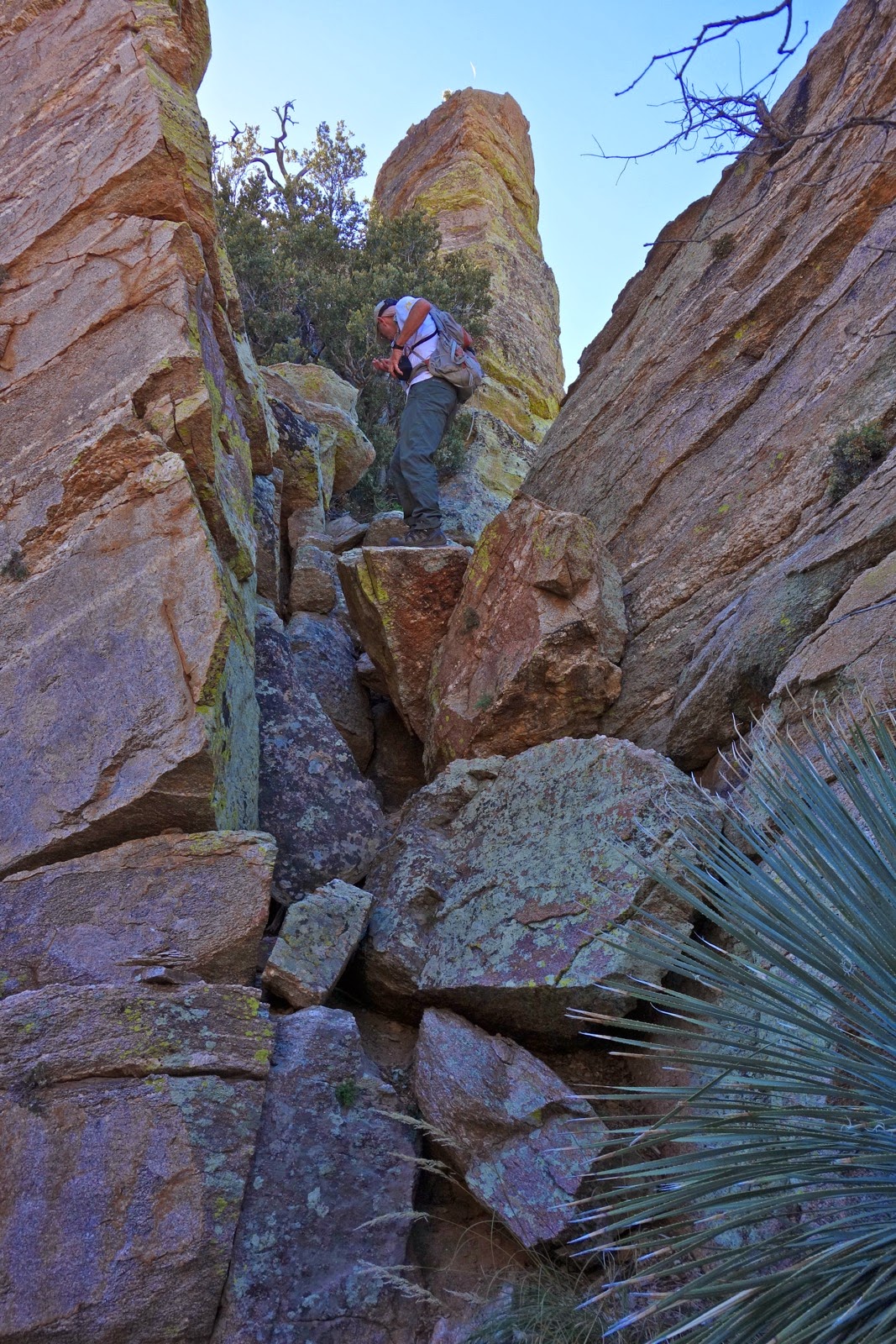 If you climb for the sheer joy of it, this is your world. 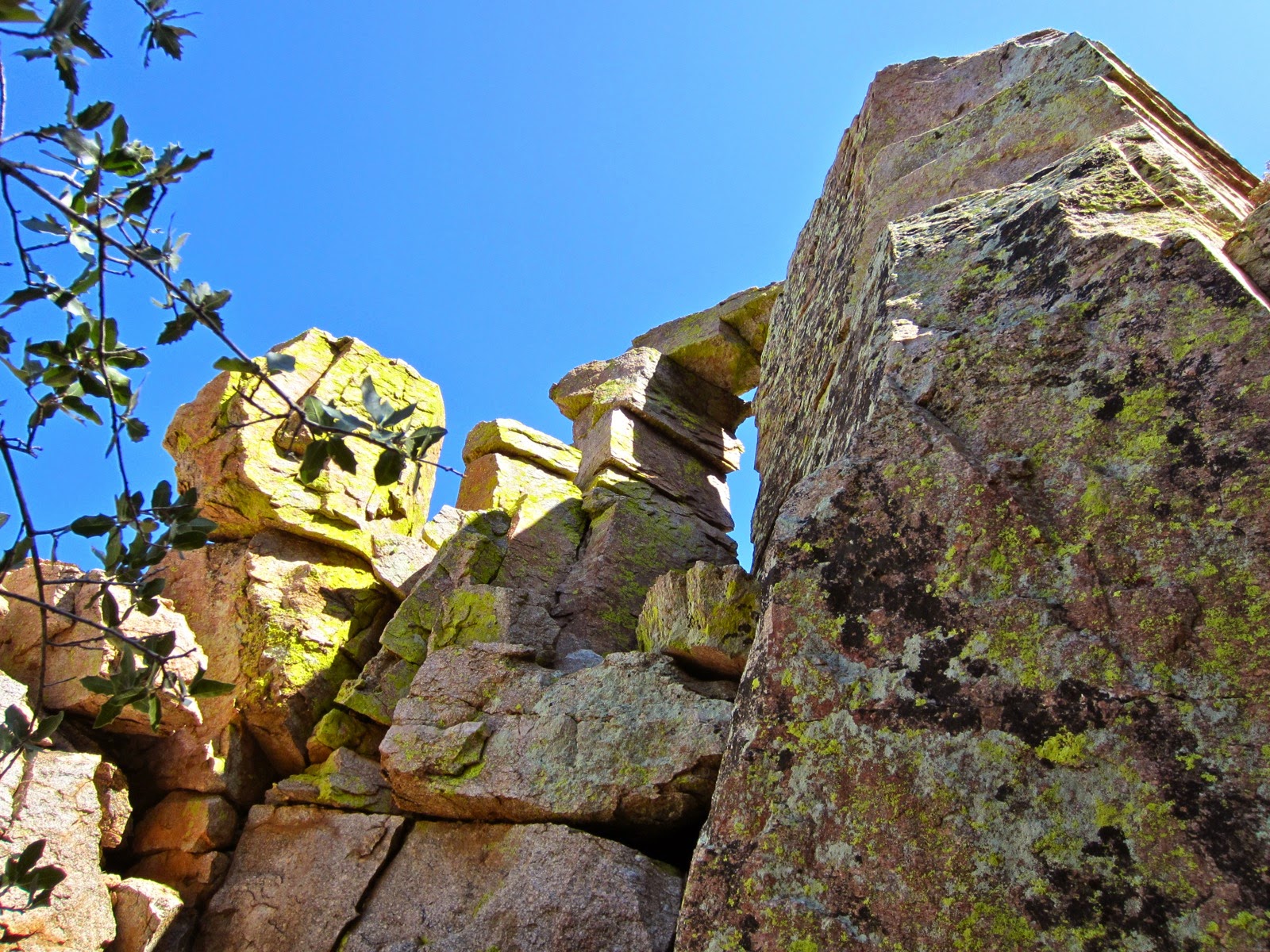 To get on top, do one airy move--scale a four foot overhung rock with good holds and mild exposure. Stand on top of the first of three towers. 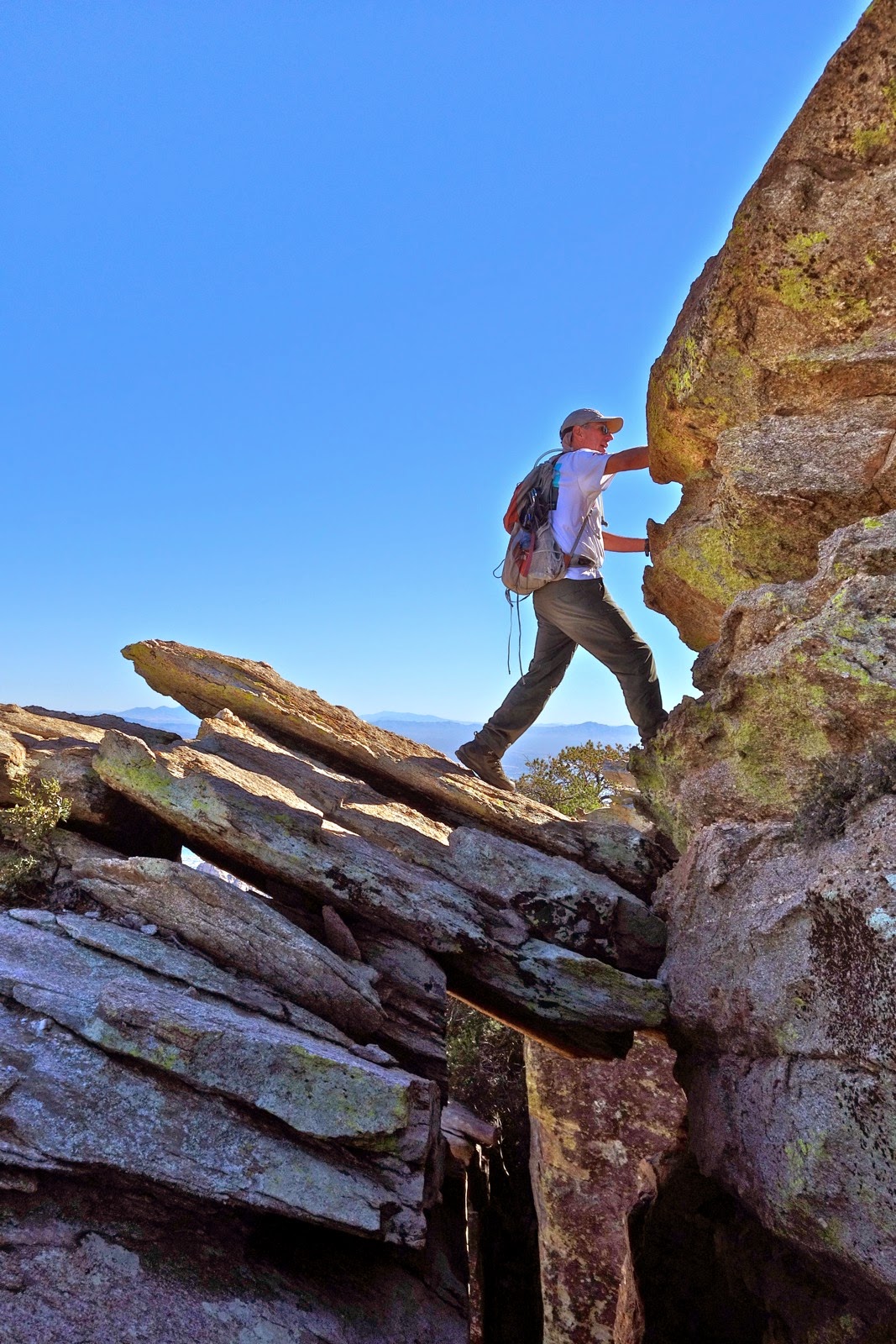 From this comfortable pinnacle, Finger Rock is a breath away to the north, camouflaged by Prominent Point East. In this image, it is just left of center with a rock stack on its top. 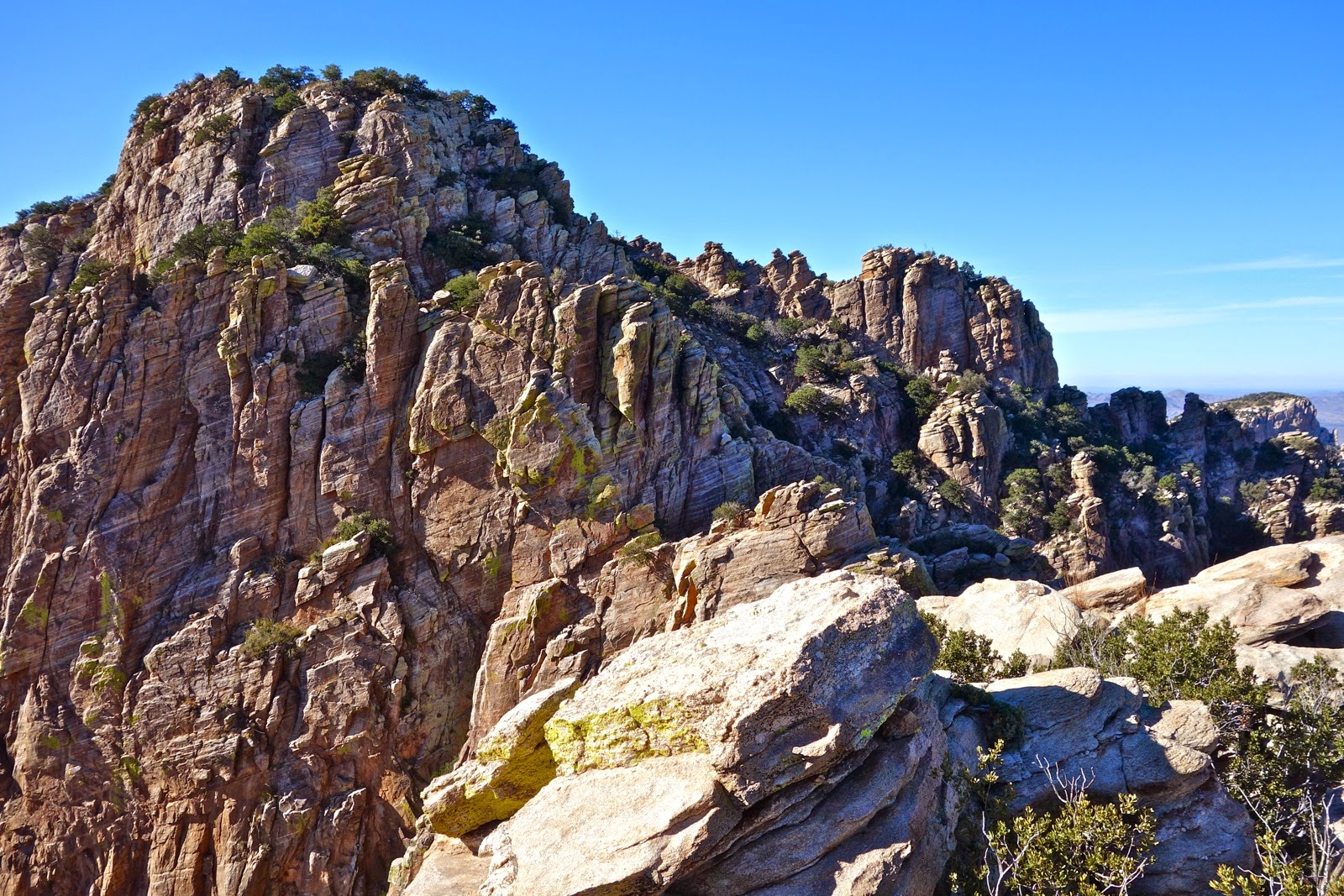 Traverse to the slightly higher middle tower by walking on pedestals. Exposure increases dramatically but the footing is excellent. This freefall observation point is muted slightly by the subsidiary third tower. 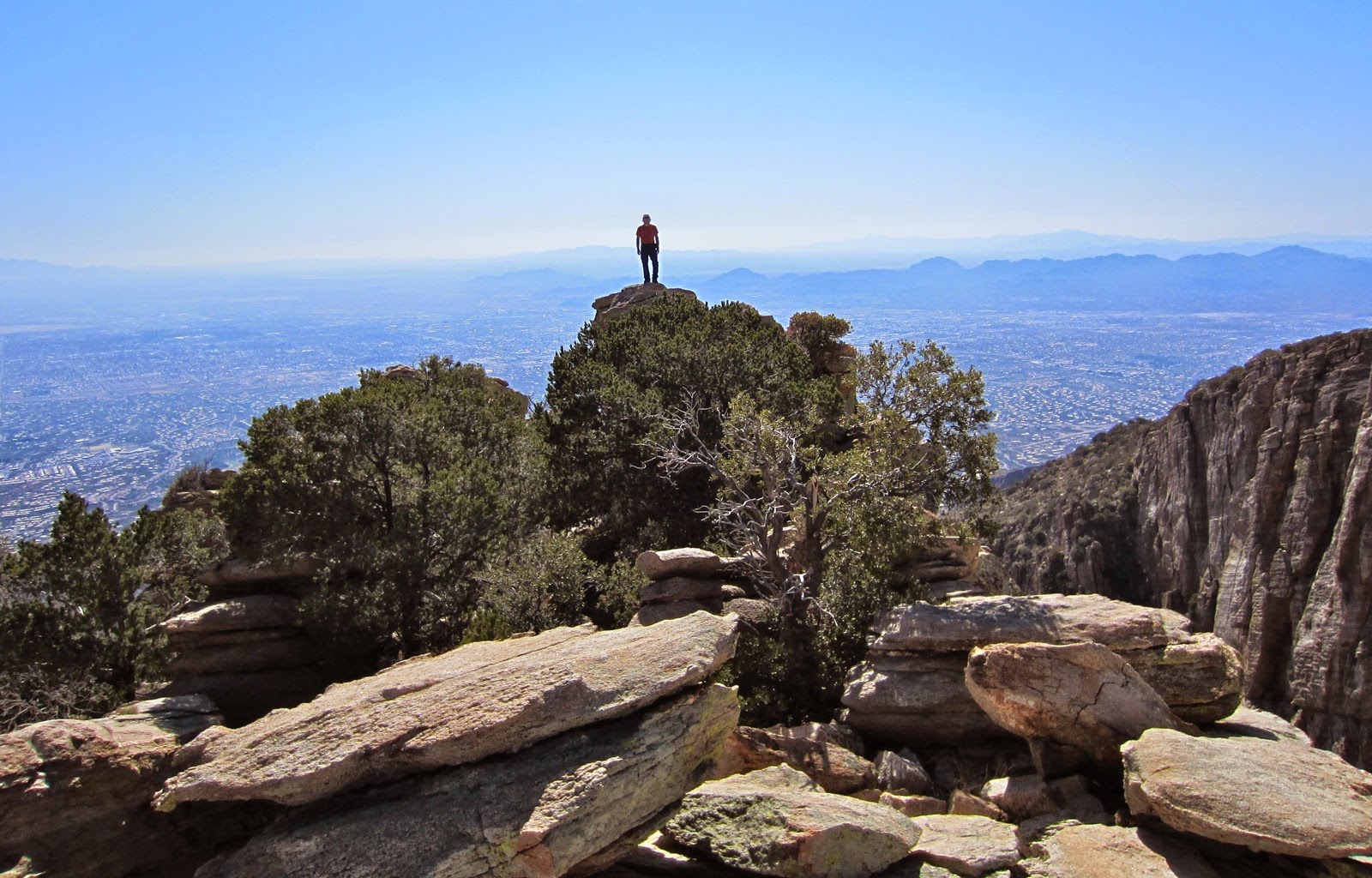 On the descent, stay alert for there are alternative cairned routes, some trickier than others and one heading off towards the west. Stay on the northeast side of the prominence. Once past the short airy downclimb, look for this squeeze. 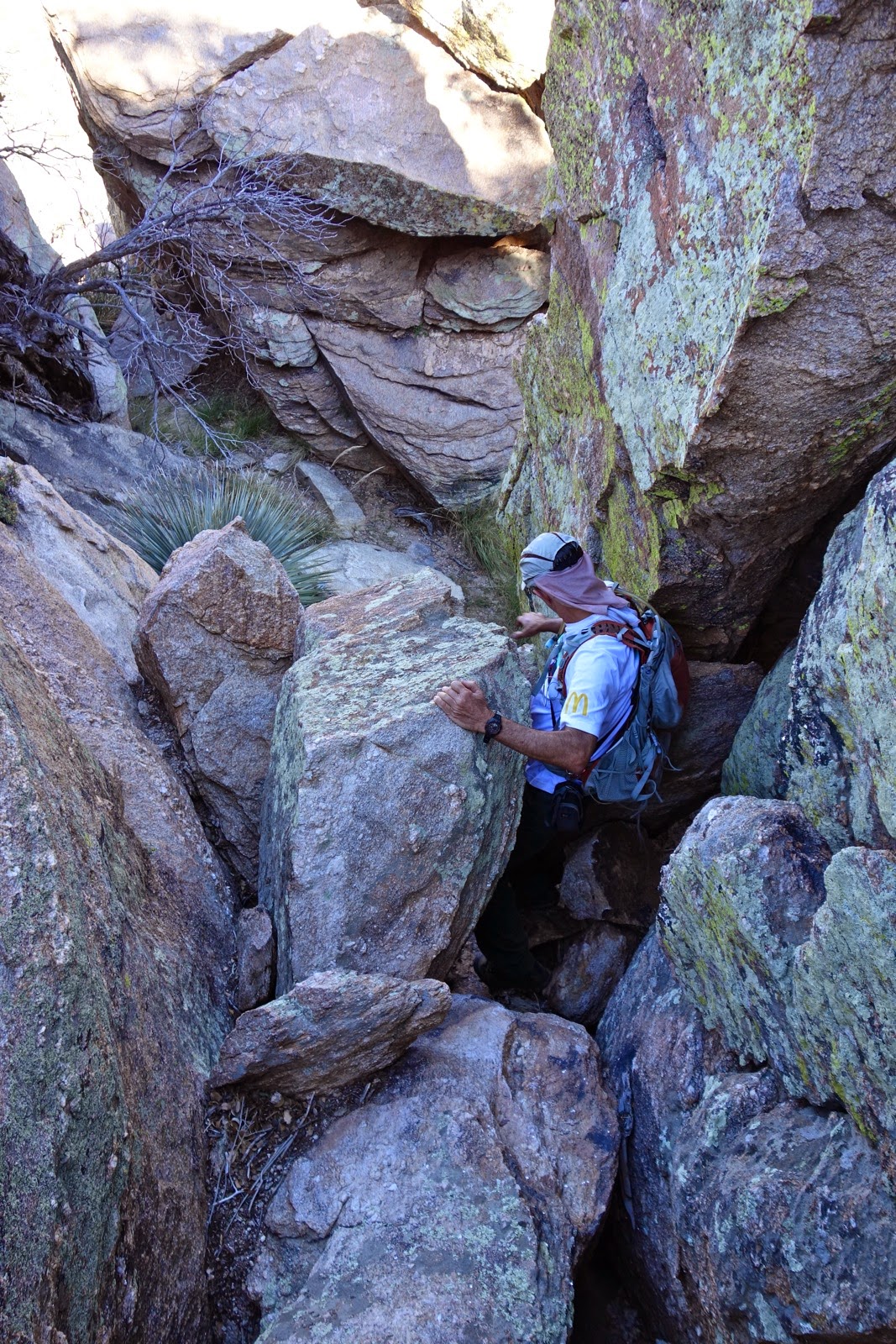 Slither down the wall. 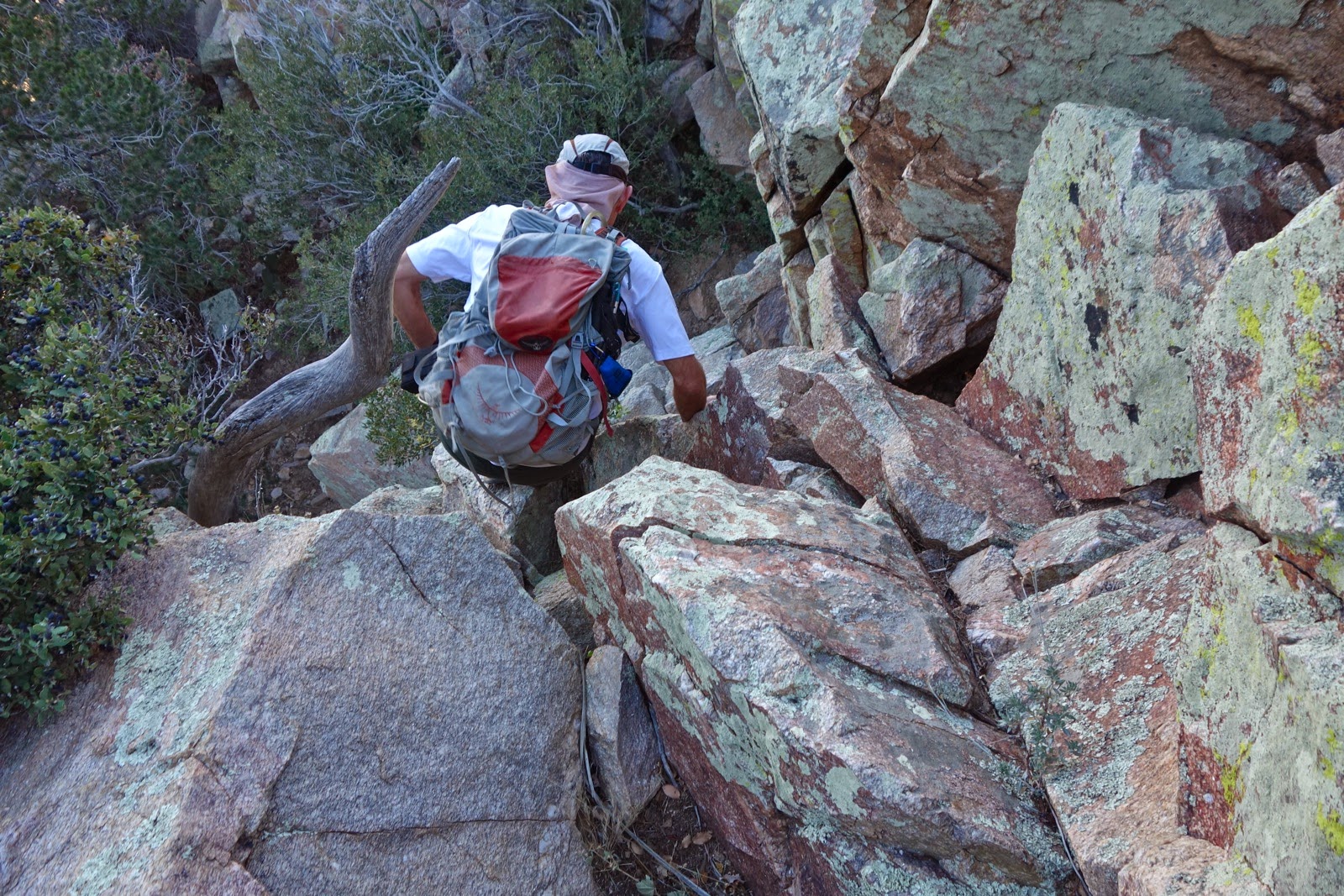 From Saddle 5,980', return on the social trail to Linda Vista. 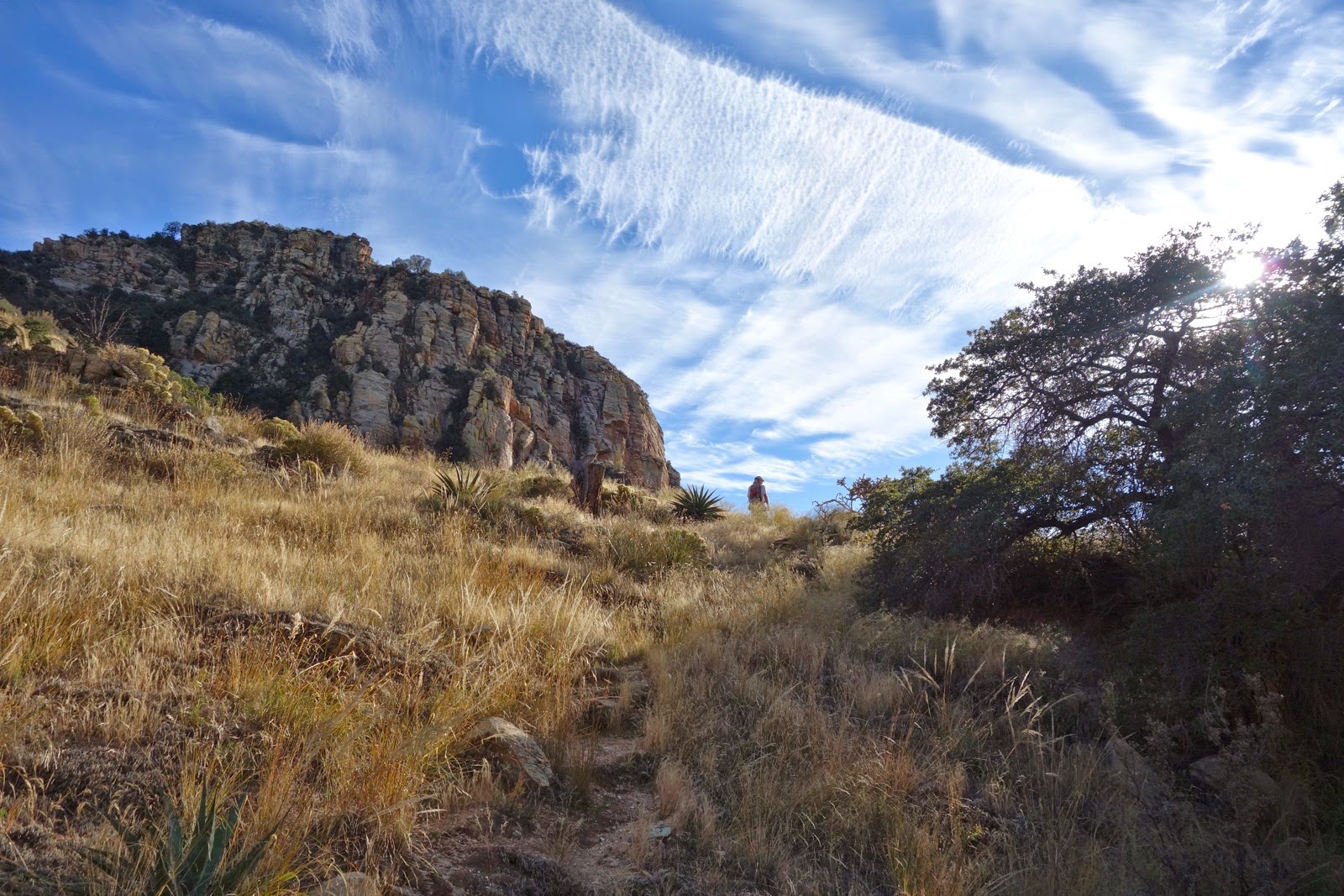 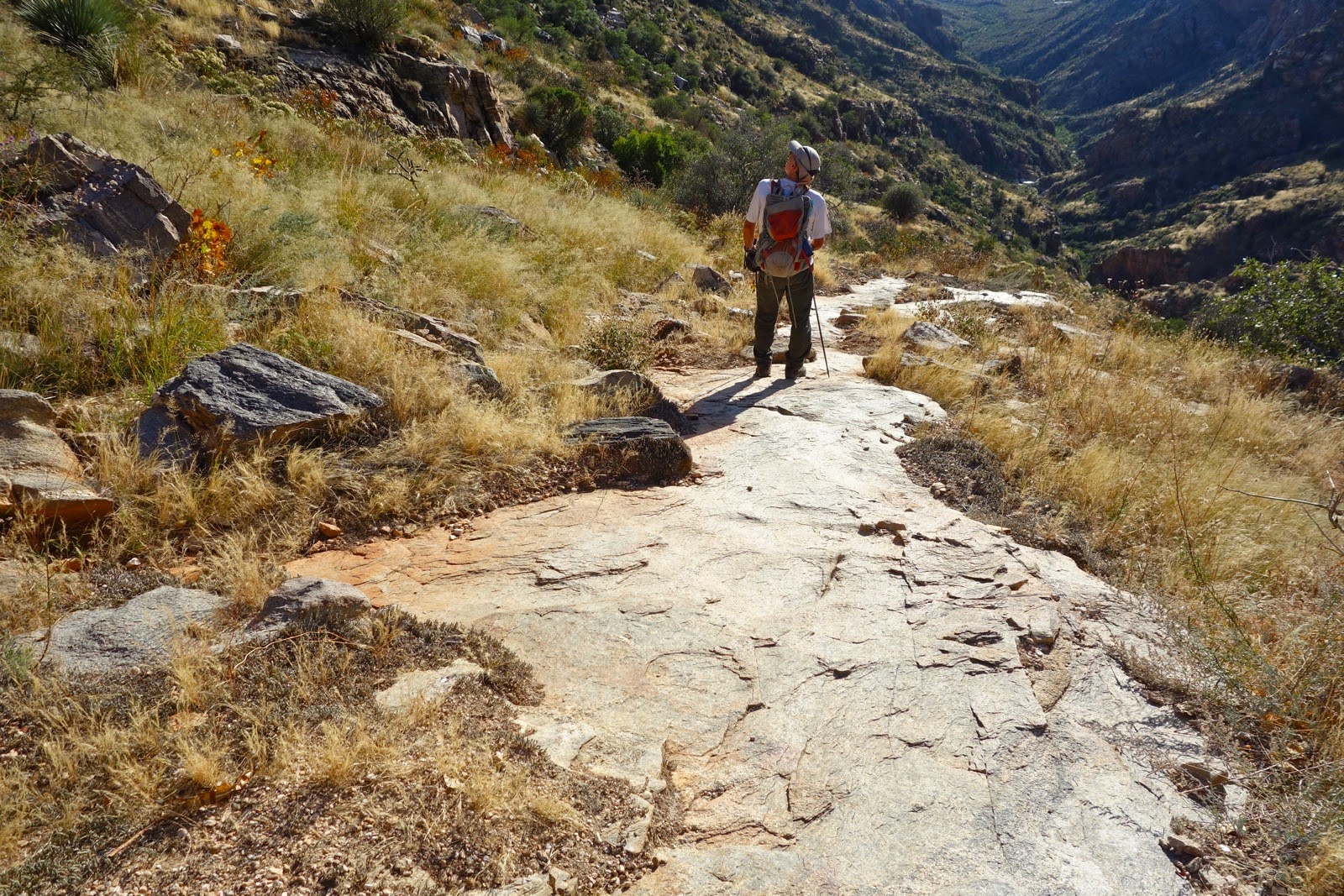 Time it right and see Sun set over the Tucson Mountains from the trail. 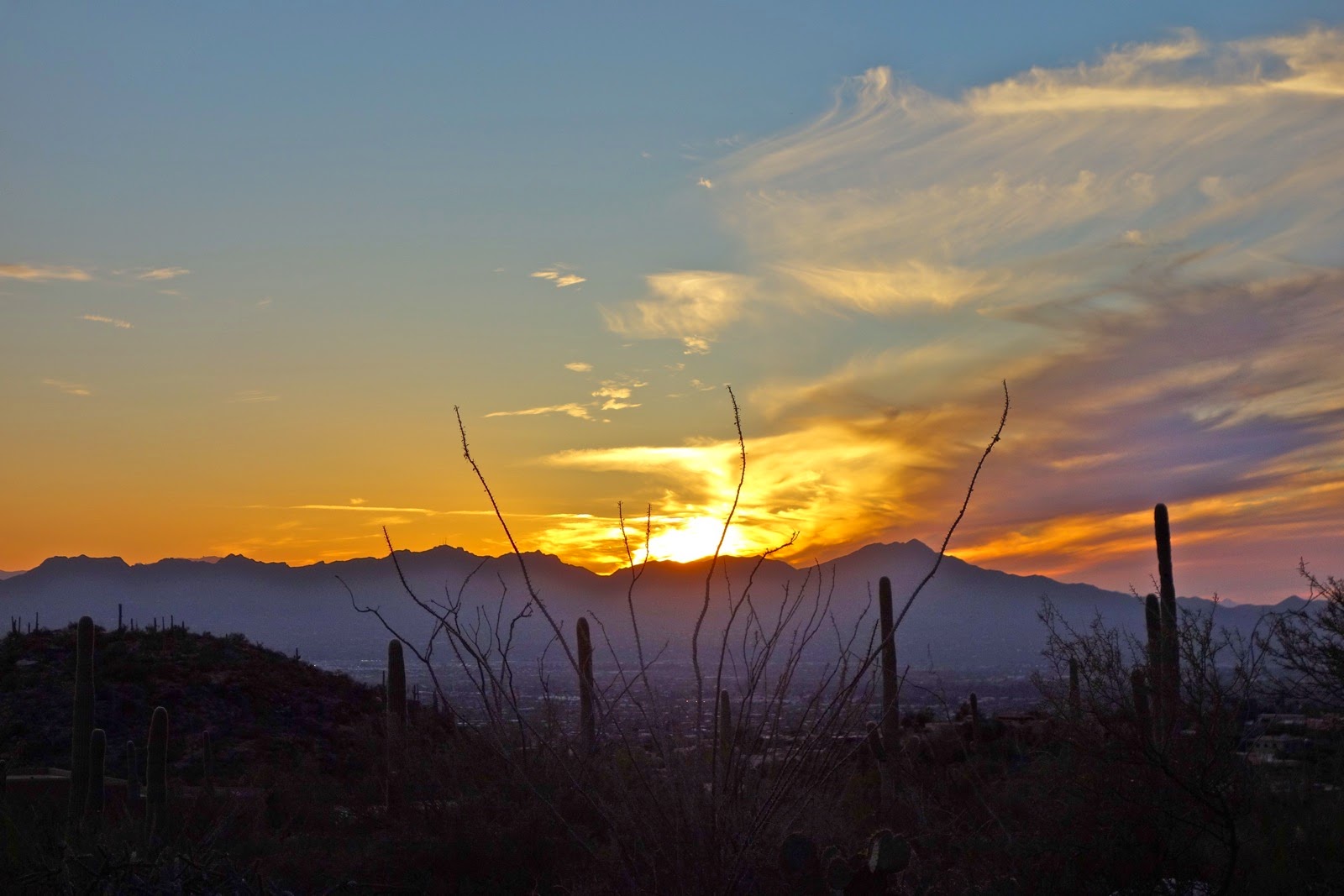 Prominent Point Exploration:
We were hoping to climb Prominent Point from Saddle 5,980' but found it well-armored. We tried four approaches, all unsuccessful. The entire backside of the ridge is complicated with towers. However, we did discover cairned routes to the notches on either side of Finger Rock. From the saddle, take a vague trail northwest. It wraps around the base of The Guard. There are series of cliffs to negotiate so follow cairns carefully. There are abrupt elevation changes, ledges, and exposed scrambling. Climb very steeply to the notch between The Guard and Finger Rock. It is a tiny opening and Tucson is obscured by trees. We descended to another cairned route that climbed to the notch between Finger Rock and Prominent Point. This notch was more open with bigger views to the southwest.  Daring and skilled climbers may be able to achieve the base of Finger Rock from these notches (see below). Slithering up a hopeful crack we lucked out on a superb vantage point of Finger Rock. This optional exploration, only for navigational-savvy desert climbers, added a mile and 700 feet of elevation gain. 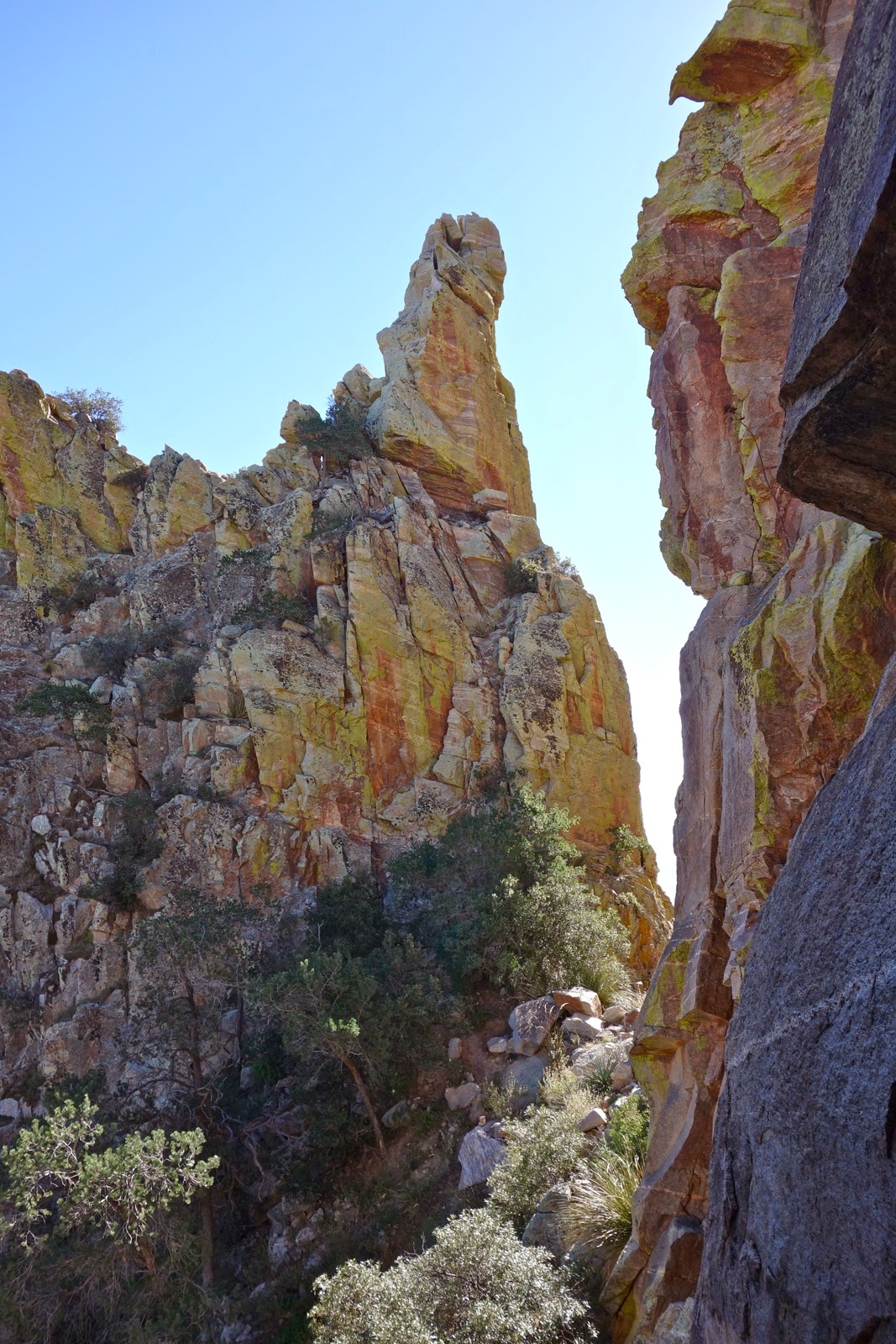 And finally, the image below was shot from the ridge just below Mt. Kimball. It clearly shows the upper portion of the entire hike: Saddle 5,980', Finger Rock Guard, Finger Rock, and Prominent Point East and West. 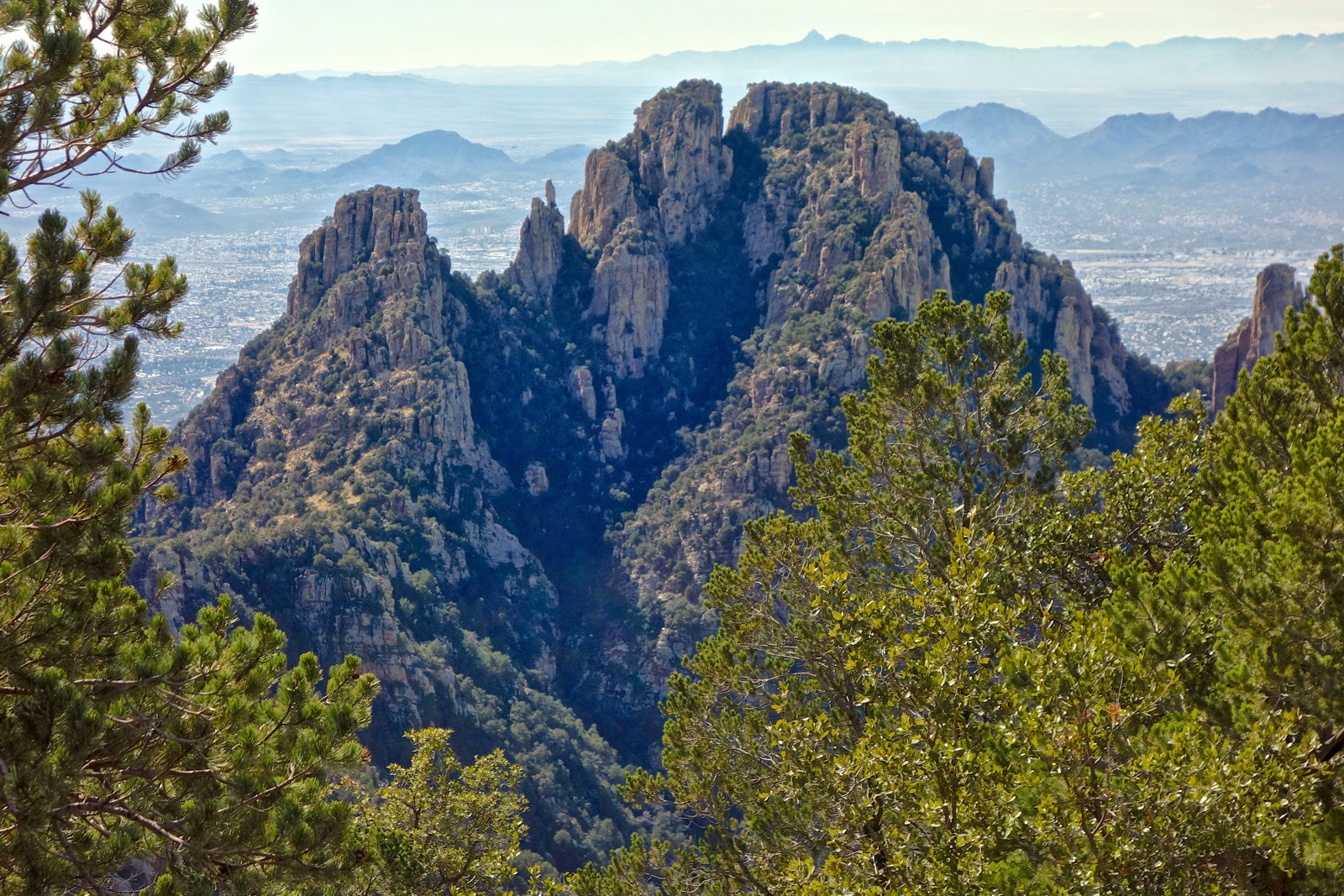 Posted by Debra Van Winegarden at 8:18 AM