Essence: Pinkley Peak is the highest prominence in the Puerto Blanco Mountains, located northwest of the Kris Eggle Visitor Center in Organ Pipe Cactus National Monument. The climb is short but don't be fooled; it is not a walk. Navigation and progress is tricky through this chaotic volcanic landscape. There are several route options posted on the internet, but not this one. The greatest likelihood of success (and the most appealing) is via a ridge with fascinating and diverse features. The mountain is riddled with caves and arches. On the open bajada organ pipe cactus are robust and elaborate.
Travel: The climb begins from the Pinkley Peak Picnic Area located on the left side of Puerto Blanco Drive, a 37 mile scenic loop. The road begins just west of AZ-85 and the visitor center. Drive out a two-way, graded gravel road for five miles to the beautiful picnic grounds with a ramada, tables, and an outhouse but no water.  If you wish to complete the loop, from there the road is one-way and high clearance is recommended.
Twin Peaks Campground: Reservations required during peak season, January through March. The peaceful village has 208 sites, solar showers, and starry nights.
Distance and Elevation Gain: 4.2 miles; 1,600 feet of climbing
Total Time: 3:00 to 5:00
Difficulty: off-trail; navigation moderate; Class 2+ with mild exposure; carry all the water you will need; hike in cool weather only, some shade in caves.
Maps: Lukeville; Tillotson Peak, AZ 7.5' USGS Quads, or Trails Illustrated Map No. 224, Organ Pipe Cactus National Monument
Date Hiked: March 29, 2019
History: The mountain was named for Frank Pinkley, archaeologist, park ranger, and NPS Superintendent of 27 Southwestern National Monuments. He was developing Organ Pipe Cactus National Monument at the time of his death in 1940.

Volcanic Pinkley Peak is visible all along the access road. The fault-block Puerto Blanco range has a tilted assortment of rhyolite, ash-flow tuff, lava, and breccia. Erosion and rubble has created a somewhat formidable mountain. 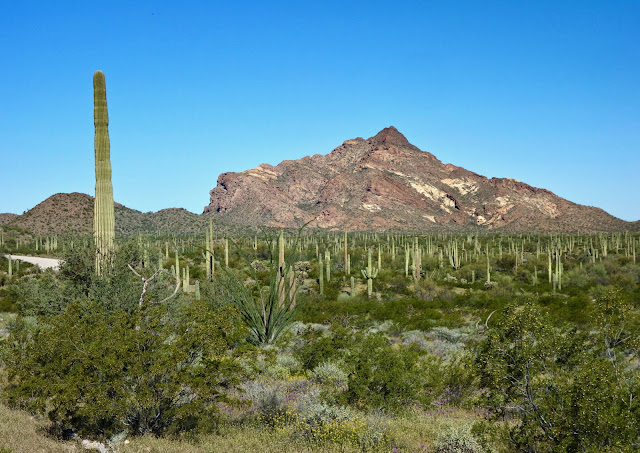 Route: I am grateful to the ranger in the visitor center who casually mentioned he, "went up the south ridge." From the summit, the south ridge makes a broad arc to the southeast. From the picnic area walk west to gain the ridge. Our track is the black line route. Next time we will attempt to access the ridge sooner as indicated with the blue line. Note: this topo uses 20 foot contours. 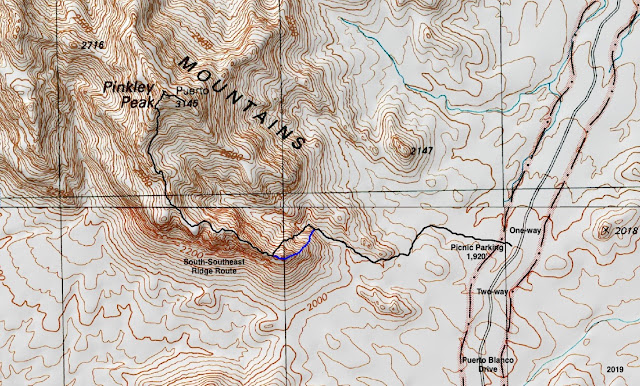 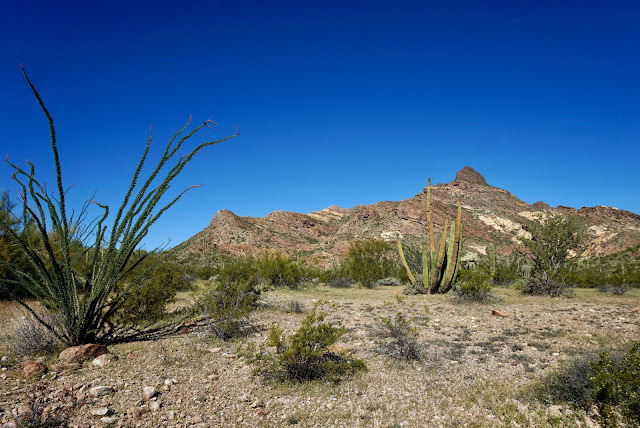 There was a big bloom in March, 2019. Brittlebush, rock hibiscus, fairyduster, ocotillo torches, and desert rosemallow added color to the saguaro, palo verde, and abundant cholla varieties: buckhorn, chainfruit, teddybear, and silver. We wandered all around searching in vain for a reported cristate organ pipe cactus. But we did find plenty of elaborate oddities, including this ultra tall specimen. 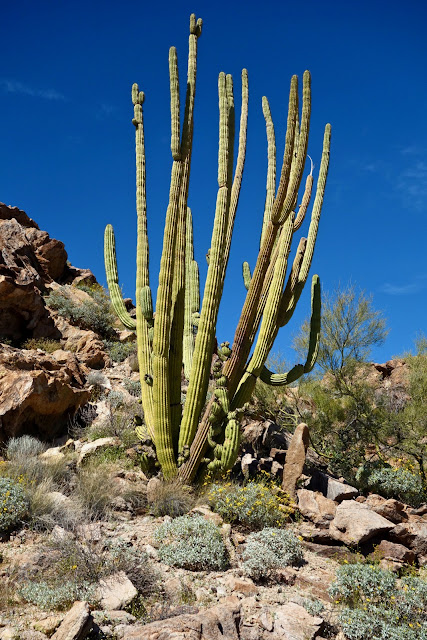 Our cristate search took us west-northwest into a draw between a couple of hills south of Point 2,147'. We turned west and went over a low ridge where we pondered routes to the south ridge. We climbed the green slope seen below, hugging the smooth stone outcrop just left of image-center. On the return, we simply skirted the base of the low ridge as indicated on the map above. (THW, photo)

A better choice may be to scale the rock plates directly to the ridge. 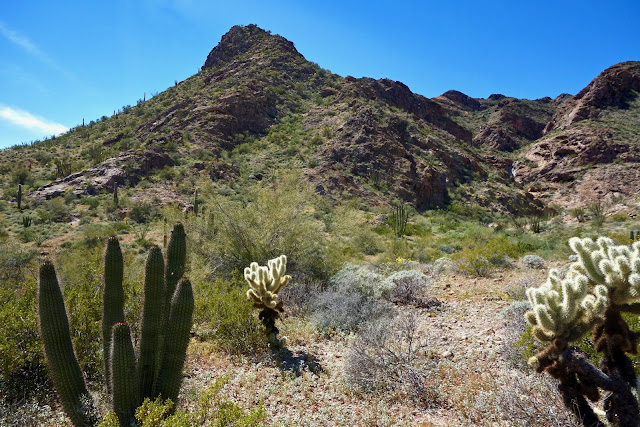 At the base of our climbing slope was a drainage with a smooth bedrock floor, shown, that led into a heavily vegetated ditch. On our return we attempted to descend through the draw. 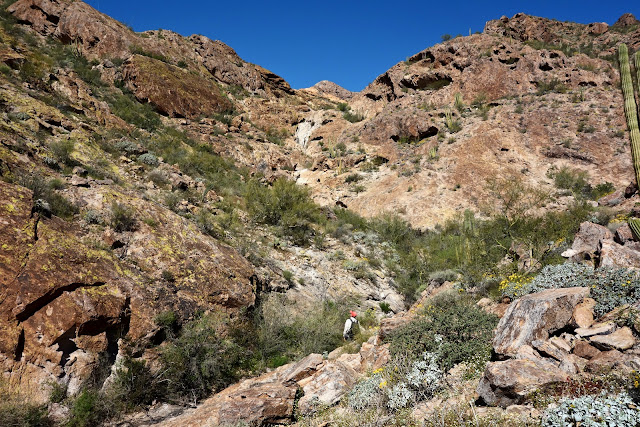 It was troubled by cliffs and we were turned back at this dry cascade. 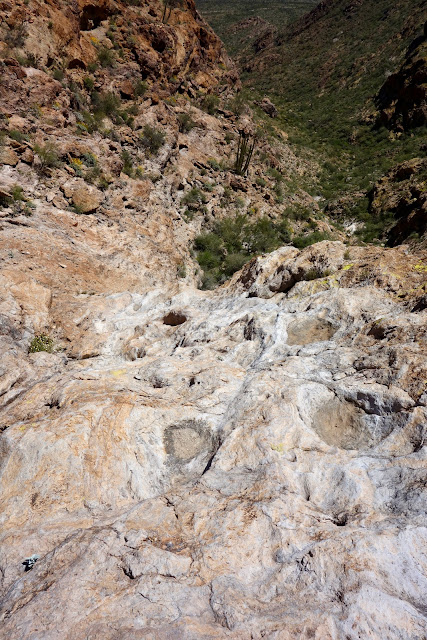 We walked on a few variegated slabs of rhyolite while ascending to the ridge. 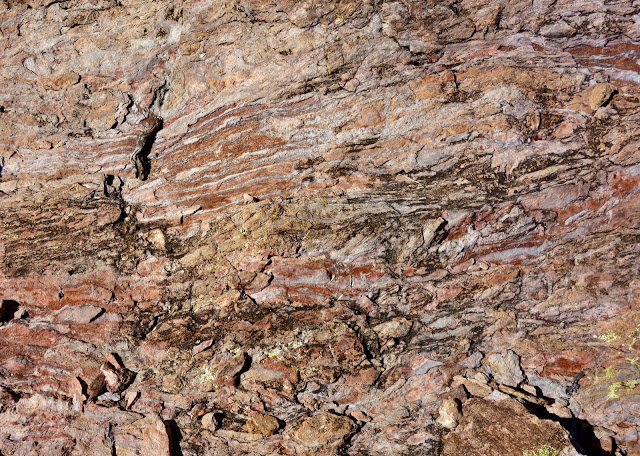 We intersected the south ridge at elevation 2,360 feet. An arch in an eroded fin was an unexpected delight. We ducked into the aperture and then looked through the window to the Ajo Range. (THW, photo) 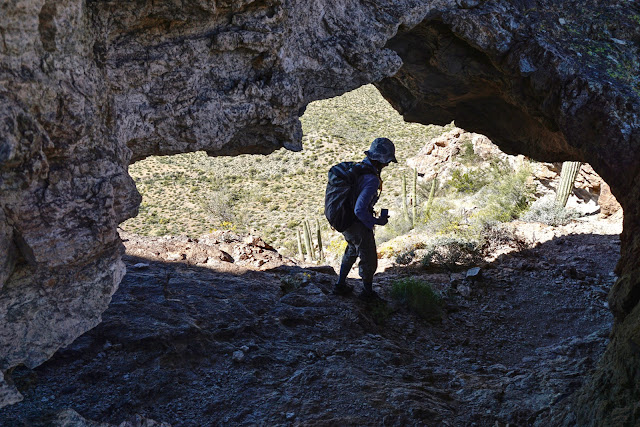 This image looks back on the outcrop that holds the arch. (THW, photo) 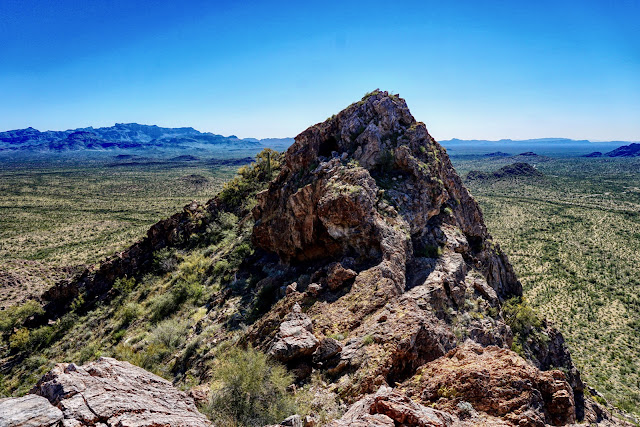 There are other arches in the vicinity. (THW, photo) 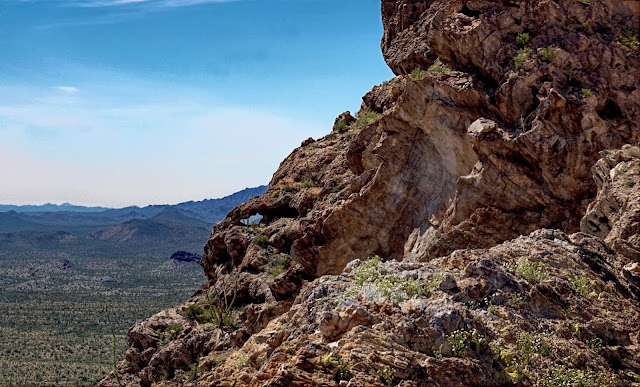 The ridge rock has a playful and haphazard feel. There is much to see and explore. (THW, photo) 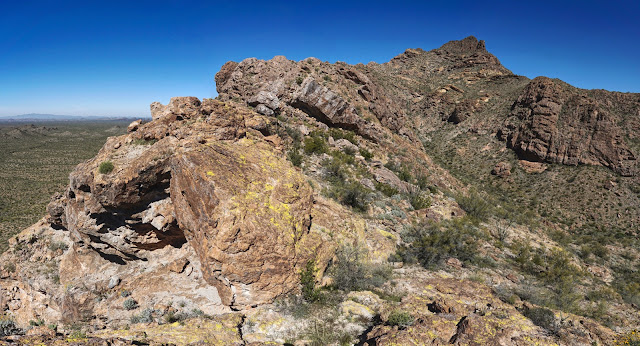 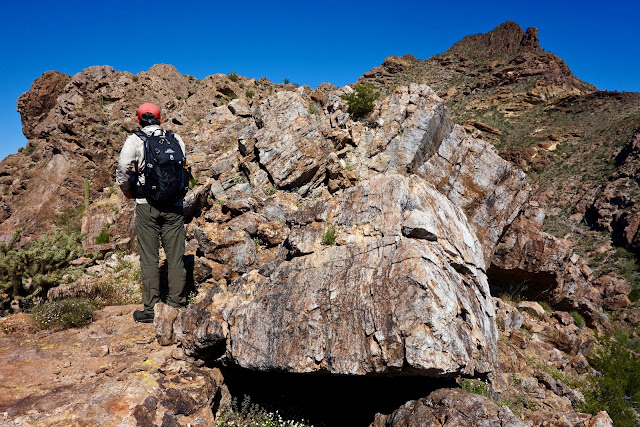 The ridge thins and there is mild exposure in one section. The image below was shot on our return. (THW, photo) 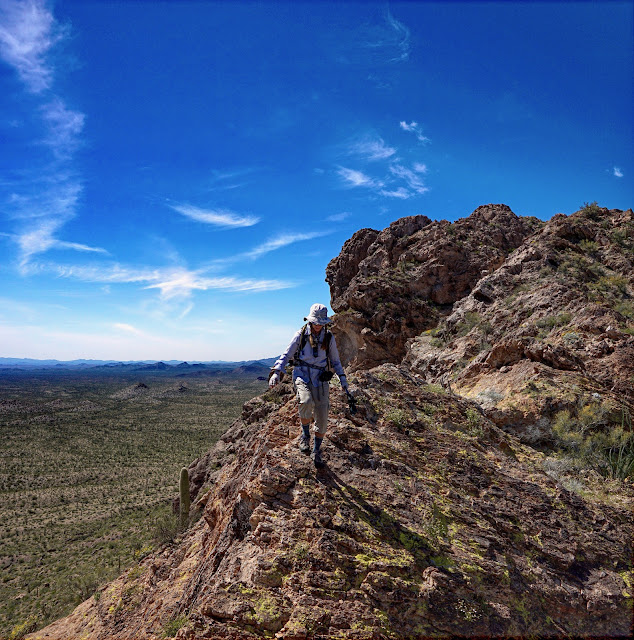 This wall of caves is comprised of rhyolite lava. Other much larger rock shelters are carved into ash-flow tuff. We think of this as Hideout Mountain because people moving northward from Mexico have been taking refuge in the natural cavities. The summit is a premier lookout and its caves are littered with blankets, water bottles, food wrappers, and clothing. (THW, photo) 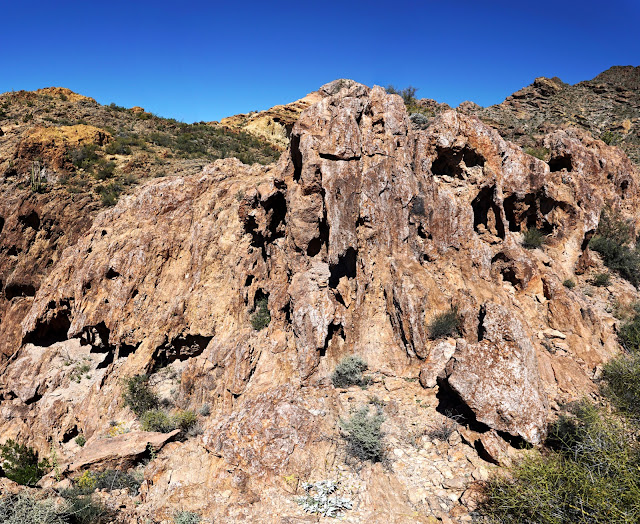 We walked right into a large concentration of Master Blister Beetles mating on the fly and feeding on the petals and pollen of brittlebush. The bright red coloration is a warning that these beetles carry poisonous compounds.
(THW, photo) 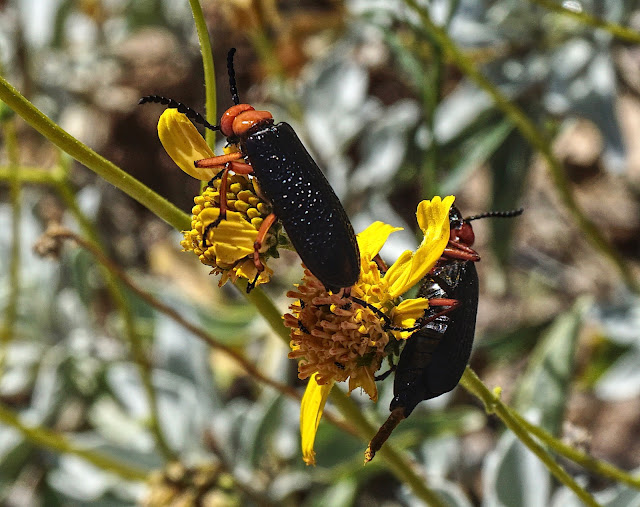 At 2,600 feet we walked up a smooth, thick layer of tuff with brilliant yellow lichen. The ridge swings north at the purple dome which we flanked on the west. 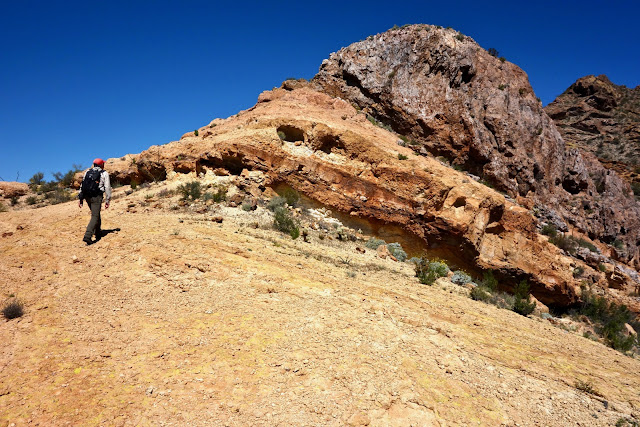 Subsequently, the ridge is troubled with gendarmes. While we bailed east from the spine it may be possible to stay on the ridgecrest. Regardless, the overhung cliffs, image-center, must be circumvented on the east. Pitch up a slope at the angle of repose covered in loose rubble. 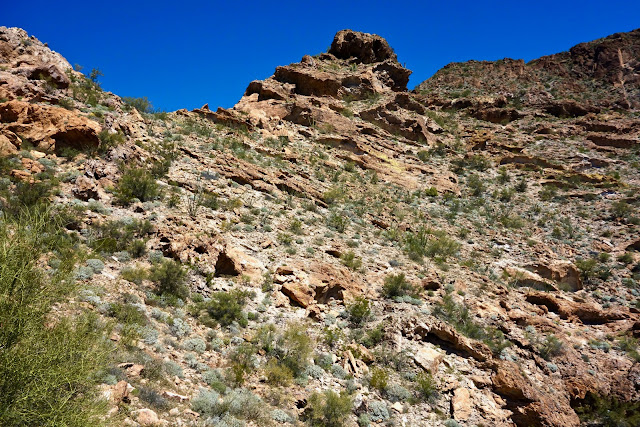 We were working our way up under the cut-away cliffs when we heard the unmistakable sound of an Africanized bee swarm. The warning was ominous so we immediately took refuge in a cave shown below and waited for the bees to move down-mountain. These swarms are dangerous and I now carry netting on my hikes in Southern Arizona. 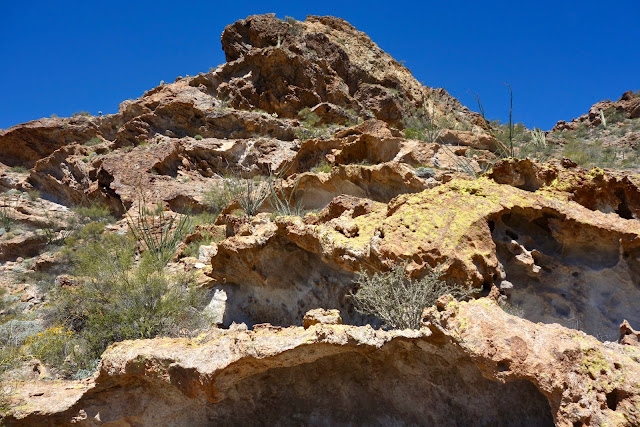 At 3,040 feet we alighted on the summit ridge. The last 100 feet is a relief on well-seated rounded boulders. 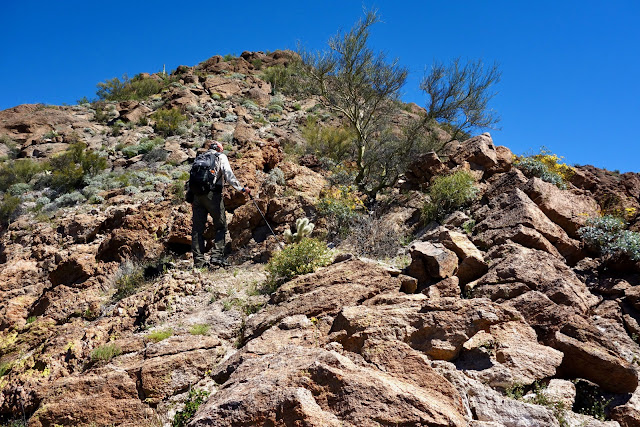 Crest Pinkley Peak after a little over two exciting miles. The view of the monument from the highest eminence in the range is superb. Dark and blocky Kino Peak is north in the Bates Mountains. In the east the Ajo Range stretches from Montezuma's Head over Mount Ajo to Diaz Peak and Spire. The soft mountains of Mexico roll away and disappear.

A small peak register was placed by the Southern Arizona Hiking Club in January, 2018. Since then, only a few have signed. 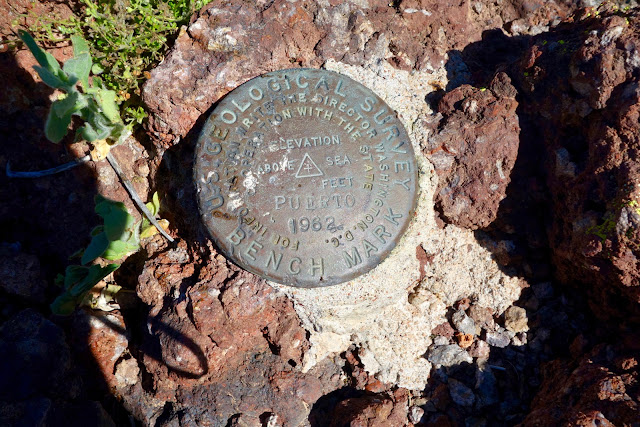 We walked southeast out the summit ridge passing the habitation caves to stand on the jutting point visible from the picnic area. (THW, photo) 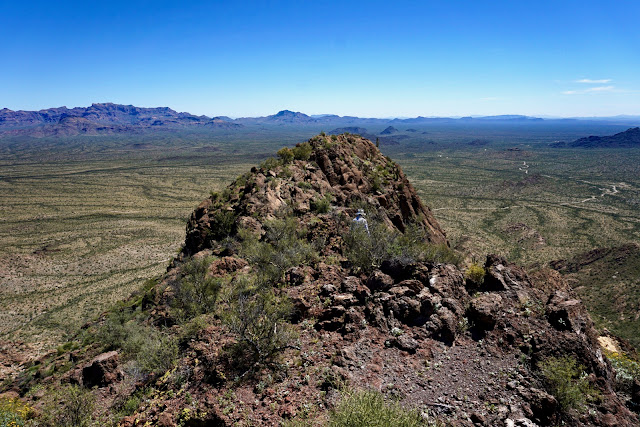 The ground plummets to an unscalable wedge. (THW, photo) 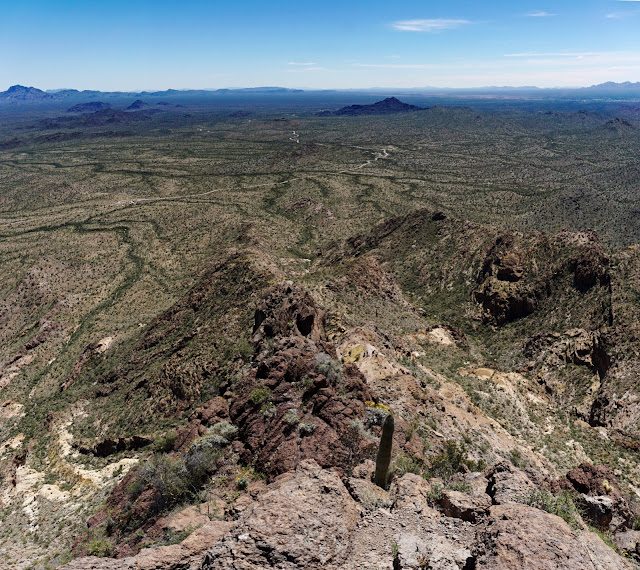 The summit is comprised of red and weathered volcanic boulders. 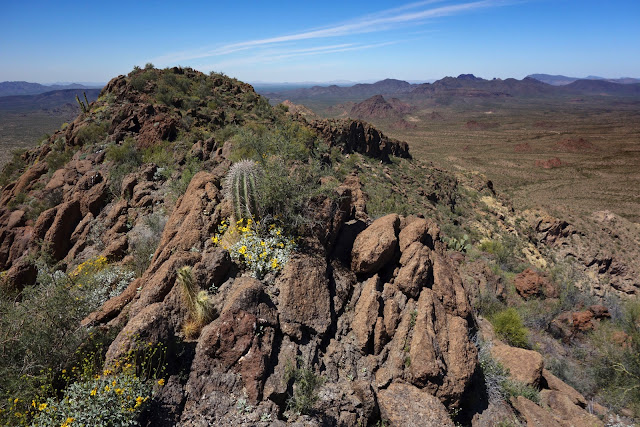 As I mentioned earlier, on our return we descended into the swale between the principal ridges. We couldn't easily locate a viable bypass around the pouroff seen below so we happily returned to our upcoming ridge. (THW, photo) 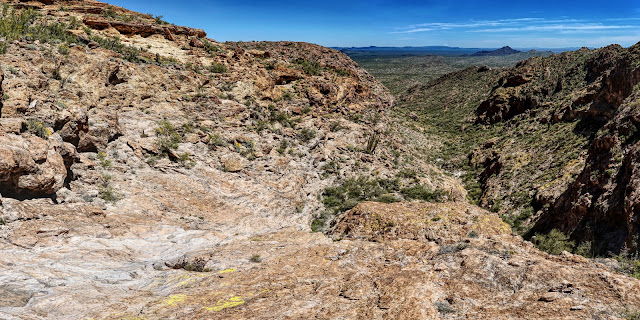 While descending we had even more fun negotiating the minor puzzles and playing around on the distinctive and diverse rock formations of Pinkley Peak. 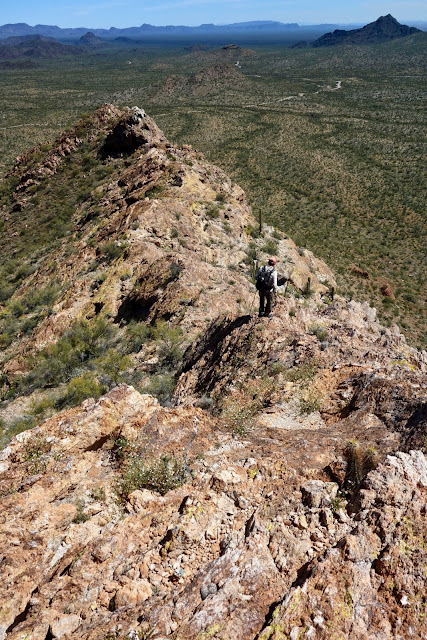