Essence: The Tumacácori Mountains are deep in Southern Arizona, west of the Santa Cruz River and north of the Atascosa Mountains. This off-trail ridge hike visits two prominent points and two peaks, including the highest in the range. The ridge is free of obstacles and views extend from Mount Lemmon well into Mexico. The hike is within the Coronado National Forest. In the valley beneath the mountains are the centuries-old towns of Tubac and Tumacácori, home of Mission San José de Tumacácori. The National Historical Park is highlighted at the end of this post.
Travel: From Tucson, drive south on I-19, America's only metric Interstate, to Exit 29 for Tumacácori and Carmen. Measure from the bottom of the ramp. Turn right, and immediately cross a cattle guard. You will need 4WD with good clearance for this rutted and rocky track. The road climbs and crosses a gas line service road at 0.9 mile. At 1.6 miles, turn left on FSR 4145. The road heads downhill and crosses into Coronado National Forest at a cattle guard at 1.9 miles. Cross Rock Corral Creek at 2.4 miles. Park at 2.8 miles where FSR 4816 branches left. There is room for one vehicle. The road gets considerably rougher after this point. The next opportunity to pull off is in another 0.3 mile. The road improves after 0.4 mile. Serious 4WD vehicles could continue on FSR 4145 for 1.2 miles past the FSR 4816 junction, an advantage for this out-and-back.
Distance and Elevation Gain: 10 miles; 3,700 feet of climbing to Peak 5,687'. For those turning around at Peak 5,736' (the range highpoint), subtract 680 feet of vertical and 1.2 miles.
Total Time: 7:00 to 9:00 for all four prominences
Difficulty: 4WD road, off-trail; navigation moderate; Class 2 with no exposure; wear long pants; hike in cool months and carry all the water you will need.
Map: Tubac, AZ 7.5' USGS Quad
Date Hiked: January 23, 2020
Poem: Proclamation

The true story of this place
recalls people walking
deserts all their lives and
continuing today, if only
in their dreams.
The true story is ringing
in their footsteps in a
place so quiet, they can hear
their blood moving
through their veins.
Their stories give shape to the
mountains encircling this place.
Ofelia Zepeda, Tohono O'odham Professor of Linguistics, University of Arizona 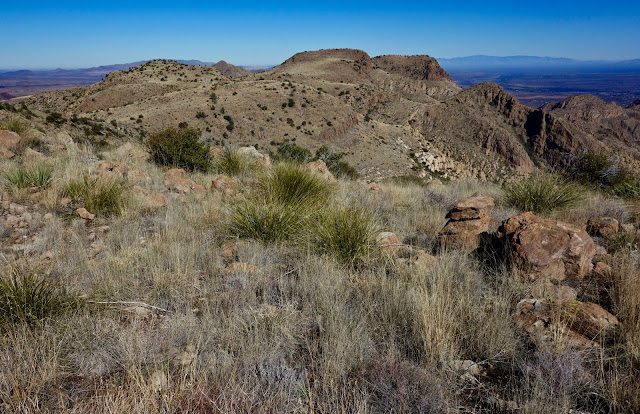 Route: Hike southwest in Rock Corral Canyon on a serious 4WD track. At elevation 4,880 feet, leave the road and pitch up off-trail to the south to north-running ridgetop. Do a short swing west to Point 5,675'. The other three prominences are on the ridge crest. Turn around at the highpoint, Peak 5,736', or continue on to Peak 5,687'. Return as you came. Two shortcut exit routes will be mentioned but not recommended. 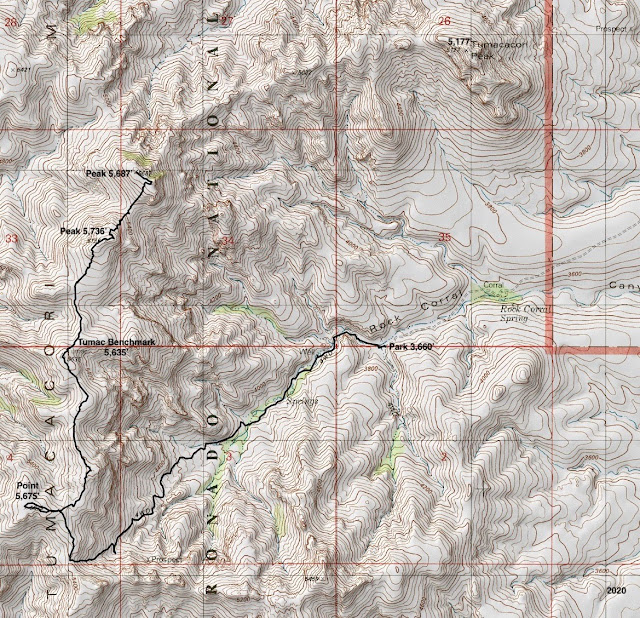 From the parking pullout at elevation 3,660 feet, Peaks 5,736' and 5,687' (center-right), look alluring. After two days of steady rain, fog infiltrates the canyon and Rock Corral Creek and the road are one. The soil is saturated beneath large Arizona oak and mesquite. (Thomas Holt Ward, photo) 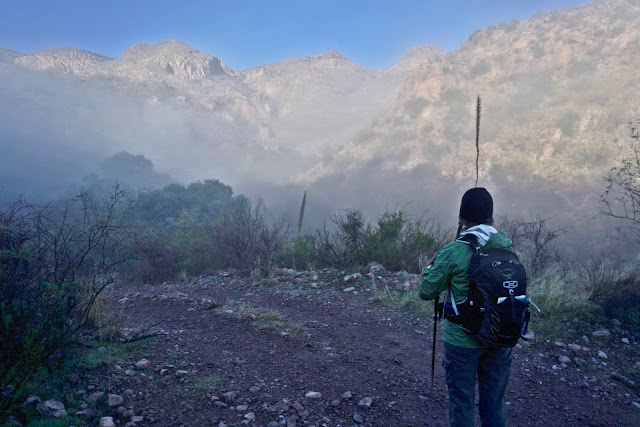 The hike stays right on the road going southwest for two miles. At 0.4 mile, pass a square, stone building, site of an old mine and well. 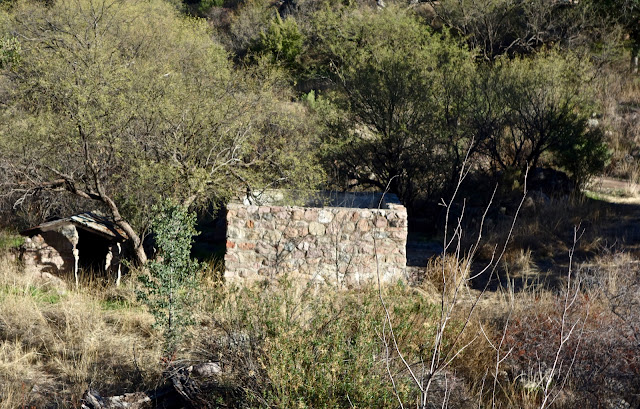 Rock Corral Canyon carries waters released throughout a significant (and complicated) basin rimmed by a mountain-topped ridge that swings in an arc from Point 5,459', the southeast terminus; to the highpoint in the west, Peak 5,736'; to Tumacácori Peak, the northeast finale.

The track climbs out of the beautiful riparian corridor to steepen significantly at 4,100 feet. Fierce buttresses, monuments, and square towers line up on the rough south rim of the basin. 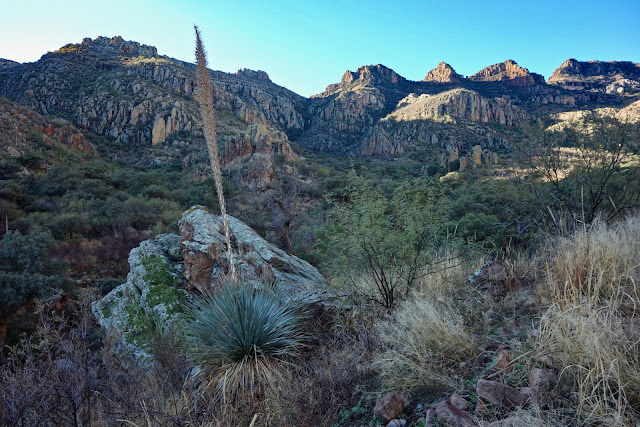 We were captivated by upper Rock Corral Canyon. Weathered volcanic tuff outcrops make up one of several eastward spur ridges that intrude into the basin's interior. 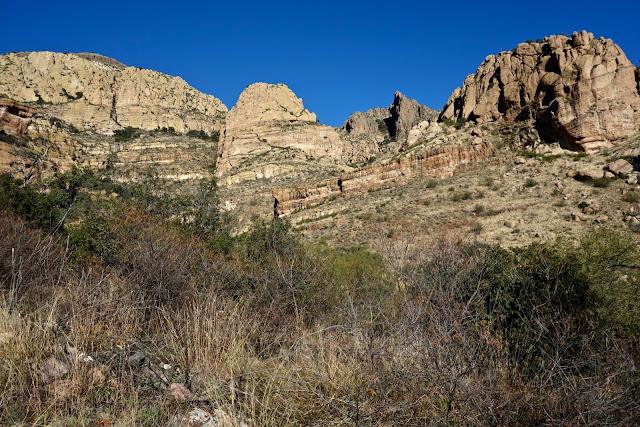 Fog enveloping the Santa Cruz River valley spilled into the canyon. The Santa Rita Mountains were in the clear rising in ever deepening shades of blue. We could make out observatories on Mount Hopkins, the signature peak, Mount Wrightson, and companion Josephine Peak. (THW, photo) 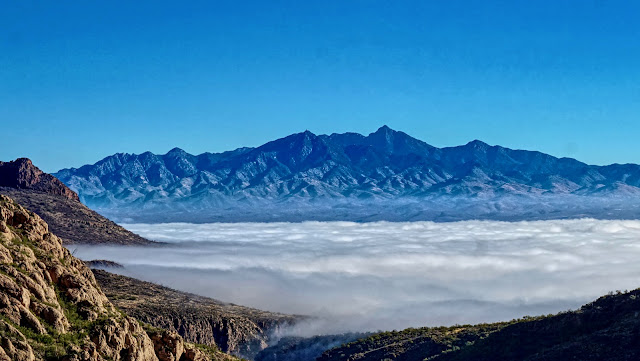 The track comes alongside Rock Corral Creek. The basin's rim pivots from east-west to south-north at the prominence, shown. 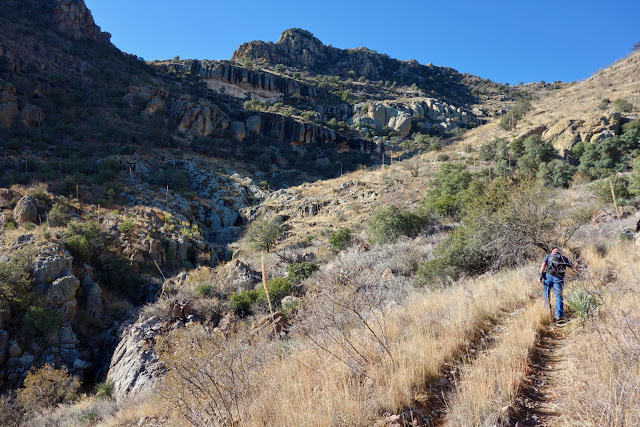 At 2.0 miles, 4,880 feet, just before the road crosses the center of the draw, leave the track and make for the ridge at a saddle while bearing west-southwest. We looked around for a cairn or social trail but it appears that this is a cairn-free, trail-free hike. We used a combination of open slopes and gully--take your pick. It is a steep grunt with unseated rocks the size of soccer balls but it was by far the best of all the lateral slopes we were on. 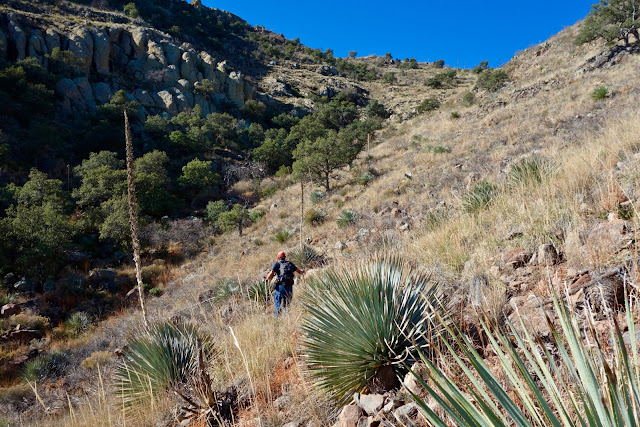 Top out on the ridge at 2.4 miles, 5,380 feet. This is as close as we would get to the Atascosa Mountains, a few miles south and very near the border with Mexico. Pictured are Atascosa Lookout and Atascosa Peak. The two ranges have so much in common we felt a sense of familiarity while walking in the Tumacácori Mountains. 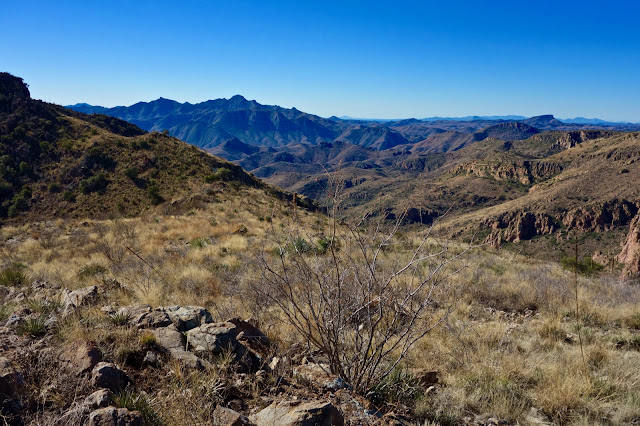 Begin trekking north on the broad ridge amongst common plants: grasses, resurrection moss tucked in bedrock, beargrass and sotol, pricklypear, rainbow-colored mammillaria cactus, and some shindaggers. After just 0.2 mile, turn due west to ascend Point 5,675'. It is a 0.4 mile out-and-back with 120 feet of climbing. The point has just 255 feet of prominence (with the saddle south of Peak 5,736'), so it is not a legal summit. But you will be glad you walked up the gentle grassy slope.

The crest register is located under a rusted bucket. It was placed in 2005 by the Southern Arizona Hiking Club. They have a yearly entry; that's about it. In 2011, the Arivaca Boys Ranch signed in. The ranch is an equine-based therapeutic boarding school in the remote hamlet of Arivaca.

Offering an unobstructed view west, we could see landmark Baboquivari Peak, a multitude of observatories on Kitt Peak, and the Coyote Mountains. (THW, photo) 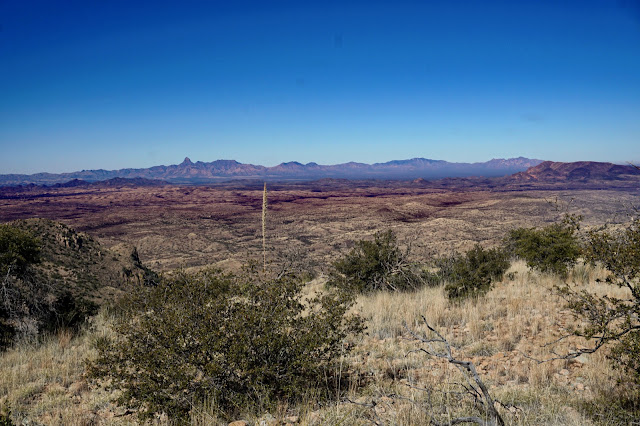 Back on the ridge, we bounced along easily up and over rollers. We walked through a grove of Mexican piñon and by flowering manzanita. We happened upon rudimentary and momentary game or social trails. For those who love a good ridge walk, this one is glorious. There is scattered evidence that migrants have passed this way. At 3.9 miles, arrive at the Tumac Benchmark, 5,635'. I am curious why this rounded little lump was given the honor. (THW, photo) 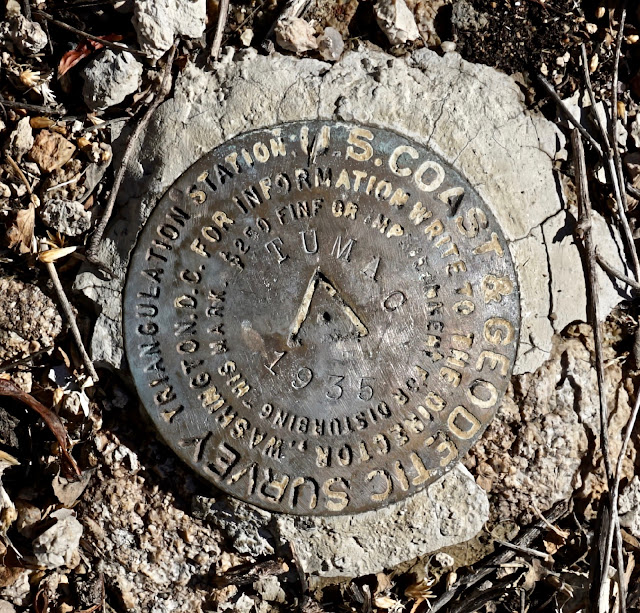 From Tumac Benchmark, the high point in the range is less than a mile away and from here looks rather like a grassy fairway. (THW, photo) 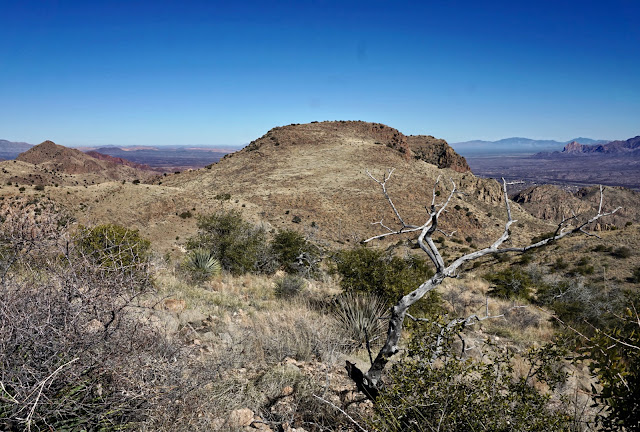 Walk up through bands of weathered red boulders coated with blue and yellow lichen. 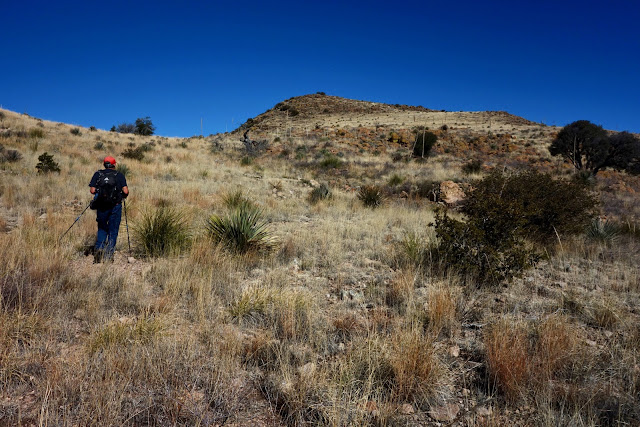 The summit of Peak 5,736' is an attractive jumble of weathered boulders and sotol. Reach the cairn-topped mountain (and peak register) at 4.6 miles after 2,600 feet of elevation gain. From here we could see Sardina Peak and red, Diablo Mountain toward the northern end of the range. They looked so inviting we returned to climb them five days later. 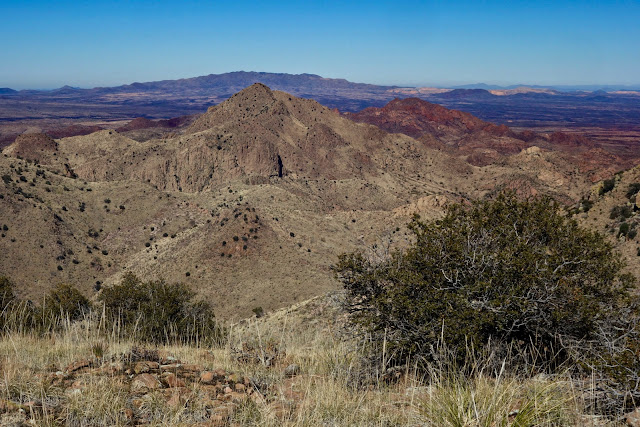 Not ready to turn back just yet, we decided to check out Peak 5,687', the sister summit, shown. The land drops away and we weren't even sure we could get through the minor cliffs. But we were able to pick our way slowly down the boulder-covered, Class 2+ slope. (THW, photo) 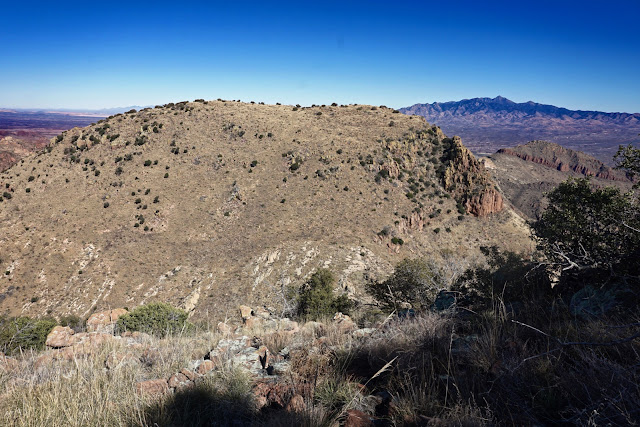 My GPS said the elevation in the saddle is 5,370 feet. The standard approximation on the topo is 5,380 feet. This gives Peak 5,687' the 300 feet of prominence from all neighbors it needs to be a ranked summit. Stand on the crest at 5.2 miles. From the eastern side of the summit platform we could see the town of Tumacácori, Elephant Head and Mount Wrightson, Pusch Ridge, Mount Lemmon, and the Rincon Mountains. (THW, photo) 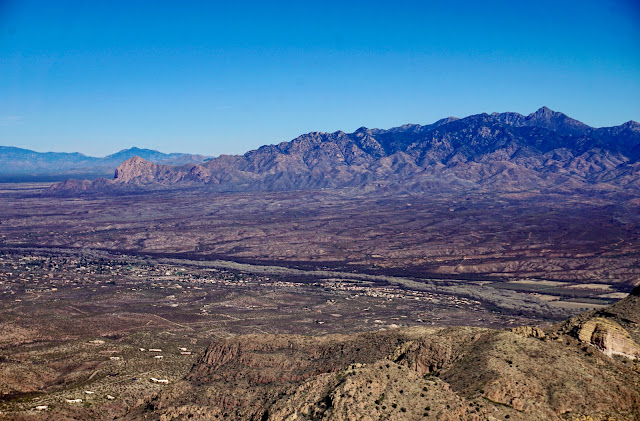 Our intention was to continue on the ridge to Tumacácori Peak, shown, but we weren't convinced we had enough hours of daylight remaining. We'll come back to tackle this segment which looks decidedly more challenging than what we've experienced so far. 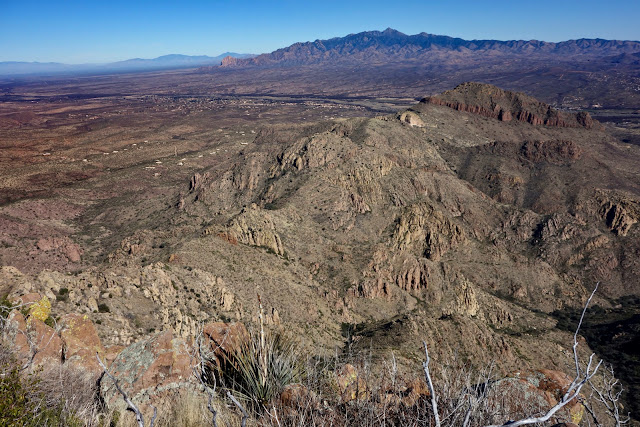 Here's a look at the west side of Peak 5,687' and the scramble that awaits. 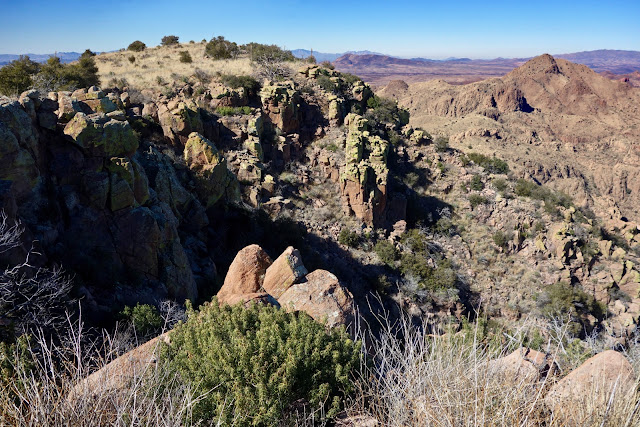 I recommend that you return the way you came. Our exit route proved to be pretty miserable. We backtracked to the saddle south of Peak 5,687' and thrashed our way southeast from there. We used a combination of open slopes and gullies. It was very steep and rolling rocks were hidden under grass and heavy brush, obscuring our footsteps. 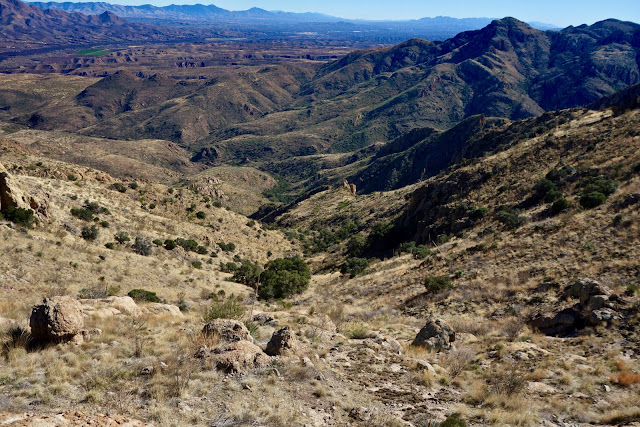 It took two hours to go 2.2 miles and drop 1,400 feet. At the junction with the side drainage joining downcanyon-right, we hit an old two-track that intersected FSR 4145 at the stone building 0.4 mile from our vehicle. We saw some rather astonishing stone features.

This image was shot from the saddle south of Peak 5,736'. Some friends descended in this gully and encountered substantial difficulties but eventually made it to the old two-track we stumbled upon. If you gamble on this option, I was told to turn left at a double pinnacle around 4,750 feet or you will be cliffed out. Next time I hope to avoid the whole dilemma by completing the ridge to Tumacácori Peak. From there, we will be able to contemplate Mission San José de Tumacácori. 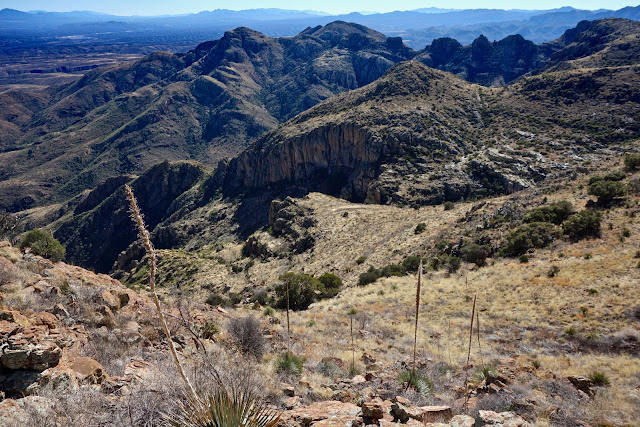 The name "Tumacácori" is an O'odham word whose meaning is lost in history. Present day O'odham living in close proximity to the Santa Cruz River are the Tohono O'odham (Papago), or desert people, and the Akimel O'odham (Pima), or river people. 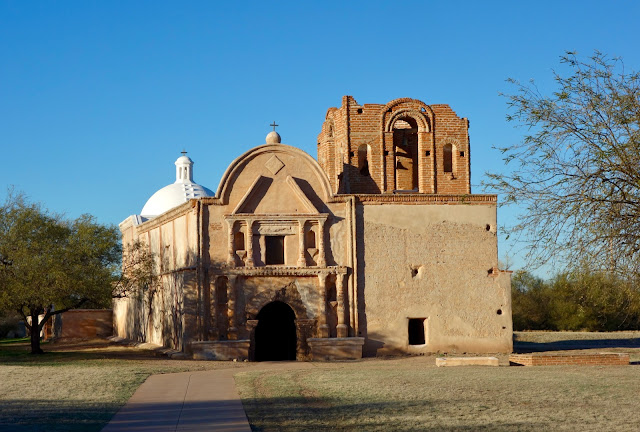 The nave from the alter. The plastered walls were intricately painted by O'odham artisans. (THW, photo) 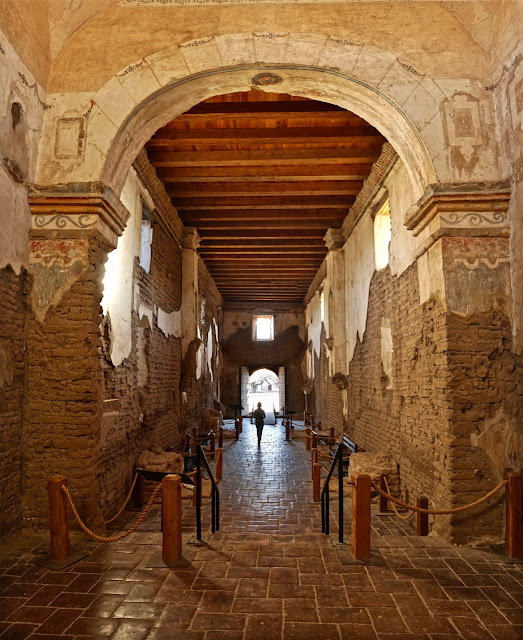 Walls of the rectory were hand sculpted. (THW, photo) 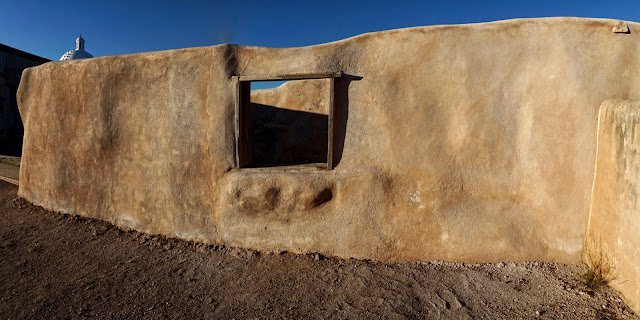 Posted by Debra Van Winegarden at 8:11 AM